How to Inherit a Villa, Kremlin Style

The family of Igor Shuvalov, who until May was Russia’s first deputy prime minister, owns a Dubai villa worth about US$ 8 million, according to a private database of the emirate’s real estate.

The exclusive waterfront property, with both a private beach and a pool, is on the Palm Jumeirah, a world-famous residential development built in the Persian Gulf in the shape of a palm tree.

Shuvalov’s family property is just doors away from villas associated with Sheikh Ahmed Bin Saeed Al Maktoum, the youngest son of Dubai’s former ruler. Nearby properties are listed as being owned by Heydar Aliyev, the only son of President Ilham Aliyev of Azerbaijan; and Dmitry Rybolovlev, the Russian billionaire who owns the football team AS Monaco FC .

Information about the Shuvalov family apartment is contained in leaked files shared with C4ADS, a US non-profit which analyzes data, and reports on global conflict and transnational security issues. The Organized Crime and Corruption Reporting Project (OCCRP) built a database from the documents and assembled a consortium including Finance Uncovered to publish stories based on it beginning in June.

In correspondence with the Shuvalovs’ official spokesman, Finance Uncovered has now learned how the family of the longtime Kremlin insider used a UK company and a network of British Virgin Islands (BVI) companies to manage ownership of the Dubai villa.

And while there is no suggestion of wrongdoing by the Shuvalov family, the property’s paper trail provides insight into how owners and investors can obscure a property’s ownership if they wish.

Shuvalov, who also owns an £11.4 million property in central London, served in the Russian government for over 20 years, and rose to prominence when he was appointed first deputy prime minister in 2008. In May of this year, shortly after Russian President Vladimir Putin won his latest election, Shuvalov left government work to run the state-controlled Vnesheconombank, better known as VEB Bank.

The Dubai property data includes the name of a UK company now owned by Maria Shuvalov called Regional Property Developments Ltd. (RPDL). Based in the Mayfair offices of Tulloch & Co, the company lists the firm’s partner Alastair Tulloch, described as Russians’ go-to lawyer in London, as its secretary.

RPDL was listed as owning a 7,000-square-foot villa on one of the exclusive “fronds” of the Palm Jumeirah. Over the past five years, Shuvalov’s wife, son and daughter have all had an interest in the UK company – and therefore the Dubai villa – through an array of ownership structures concentrated in the British Virgin Islands (BVI). 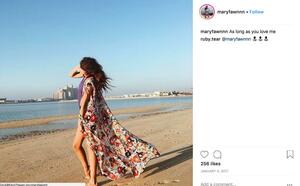 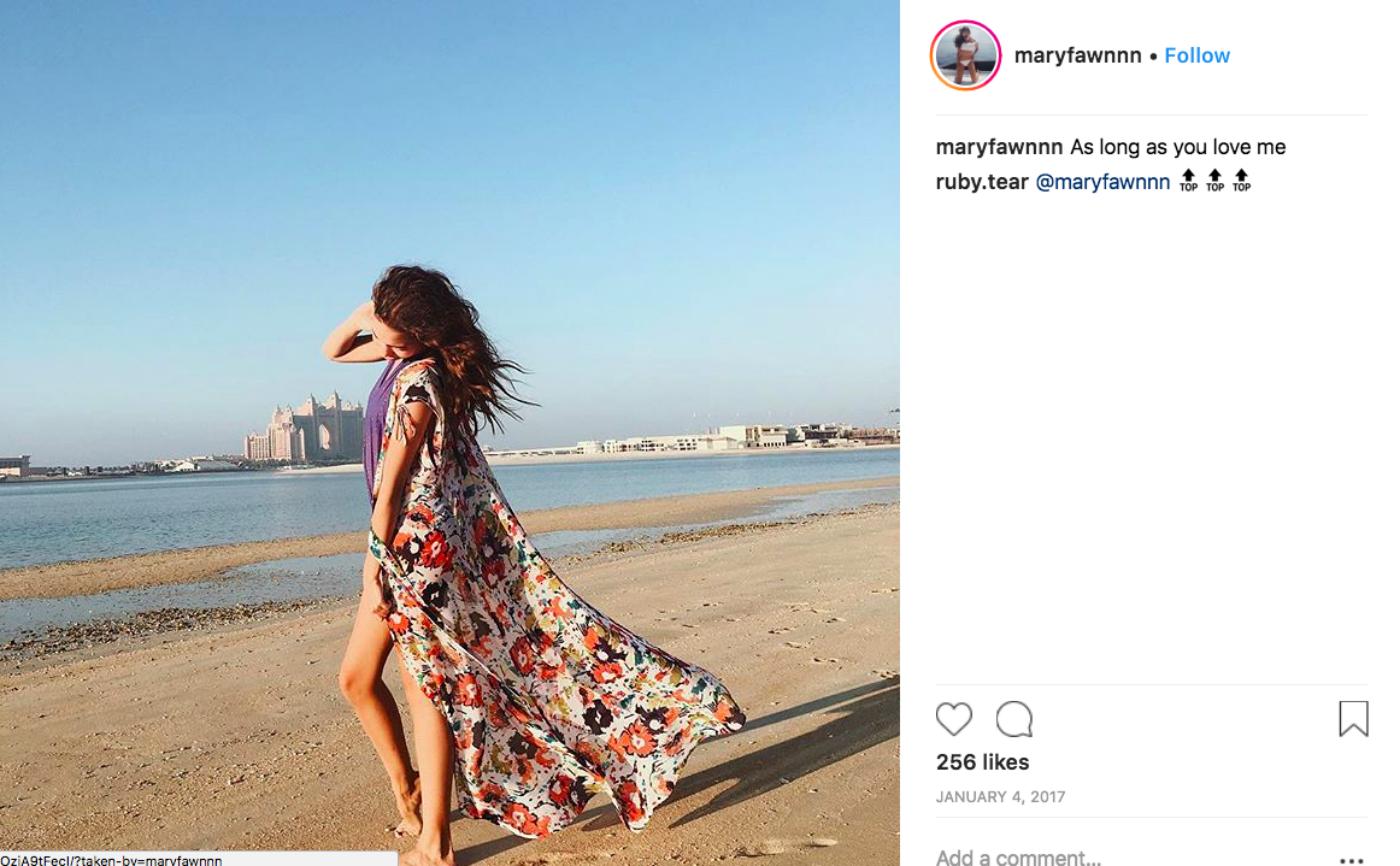 Credit: Instagram. @maryfawnnn. Igor Shuvalov’s daughter Maria Shuvalov on the beach near her villa on Palm Jumeirah in Dubai.

Staying One Step Ahead

The villa’s ownership has shifted over the years, perhaps to comply with Russia’s changing rules about owning foreign property. Several different offshore corporations facilitated ownership changes, first to Shuvalov’s wife and then, sequentially, to his two children.

The Shuvalovs referred questions to family spokesman Alexander Machesky, who said his client initially set up its foreign corporate holding vehicles for inheritance purposes and had complied with all tax and disclosure laws.

Russia has no inheritance tax, but using overseas vehicles to own property simplifies inheritance by avoiding the complications of applying to transfer title deeds when the so-called beneficial owner dies, Machevsky said.

In two public financial declarations made in 2011 and 2012, Igor Shuvalov and his wife Olga describe themselves as “tenants” of the Dubai property. The villa was in fact owned by Olga Shuvalova through a chain of offshore companies starting at RPDL and ending with the BVI-registered company Severin Enterprises Inc. Leaked documents and correspondence show Olga Shuvalova was the beneficial owner of Severin, which she founded in 2007.

Machevsky described Severin Enterprises as a “transparent vehicle” for holding family assets. When asked whether it was misleading of Olga Shuvalova to refer to herself as a tenant of a property her company owned, Machevsky dismissed the suggestion.

“There is nothing ‘misleading’ between being a tenant and an ultimate owner of the company that owned the property,” he said in an email. Most of the Shuvalovs’ properties, including those in Russia, belong to legal entities and are used under rental agreements, Machvesky said.

“There was no attempt ever to ‘hide’ assets held through any corporate vehicle,” he added. “All reporting obligations in respect of such assets have been complied with.”

It’s unclear exactly when RPDL purchased the Dubai property and the company’s annual accounts last listed fixed assets in December 2010, according to filings with Companies House in London. Machevsky said that’s because in 2011, RPDL transferred the “beneficial interest” in the property to another company in the BVI, Radcliff Business Ltd., also owned by Olga Shuvalova.

The distinction between legal and beneficial ownership is associated with trusts: a legal owner may appear on title deeds, but the asset’s economic value resides with the beneficiary of a trust. The beneficial owner retains the right to any rental income from a property or the proceeds from its sale. Hence, after the beneficial interest in the Dubai villa was transferred to Radcliff Business, RPDL stopped listing it as an asset because the legal title didn’t hold any financial value.

According to tax experts, there is no financial advantage to splitting the beneficial and legal interests, but doing so affords greater privacy. Why the Shuvalov family chose to maintain the UK company’s legal ownership isn’t clear.

In July 2013, all shares in RPDL were transferred as a gift to Marine Fortune Investment Ltd., another BVI company, this one owned by the Shuvalovs’ British-educated son, Evgeny Shuvalov. The transfer came two months after the introduction of a new anti-corruption law in Russia regulating government officials’ ownership of foreign assets. The law, part of the “de-offshorization” campaign championed by Putin, also applied to spouses of government officials and any children under 18 years of age.

Evgeny Shuvalov was 20 years old when his company received the RPDL shares, so he wasn’t subject to the new law.

Igor Shuvalov told Rossiya 24 at the time that “as soon as the federal law was passed that prohibited and [still] prohibits members of the government from holding foreign assets, we transferred all our assets to a Russian legal entity.”

According to Ilia Shumanov, deputy director of Transparency International Russia, the Shuvalovs could have continued to own the Dubai villa themselves, had they transferred the ownership of RPDL to a Russian company.

“This gives a rare insight into the extraordinary lengths the family went to in the ownership of a single luxury villa,” Shumanov said.

According to Machevsky, the legal title of the Dubai property was also transferred from RPDL to Maria Shuvalova and RPDL is being shut down.

At last, the Shuvalov family name may finally appear on its title.