Death of a Forest

High-resolution satellite images provided by DigitalGlobe and Landsat show the devastation caused by illegal mining in the Las Brisas-Las Cristinas gold mining area. Believed to be one of Venezuela’s richest areas of mineral deposits, this is the cornerstone of the Orinoco Mining Arc.

The government created this National Strategic Development Zone in February 2016 to try to control mining activity in the towns of southern Bolivar state, but the environmental damage in this sensitive area shows no signs of stopping.

Credit: NASA Landsat A series of satellite images from Las Brisas-Las Cristinas taken between 2008 and 2016 show the impact of illegal mining 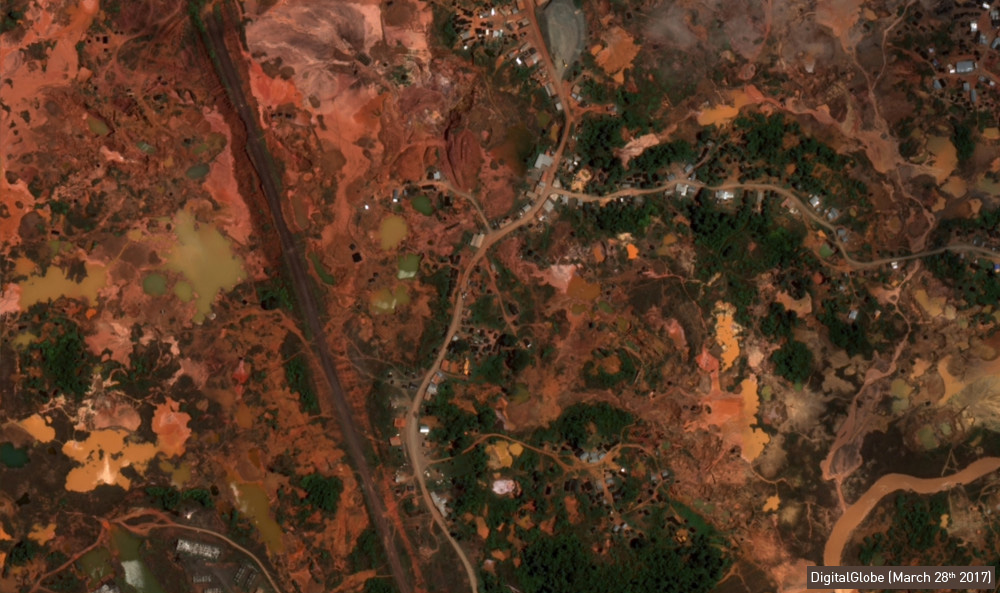 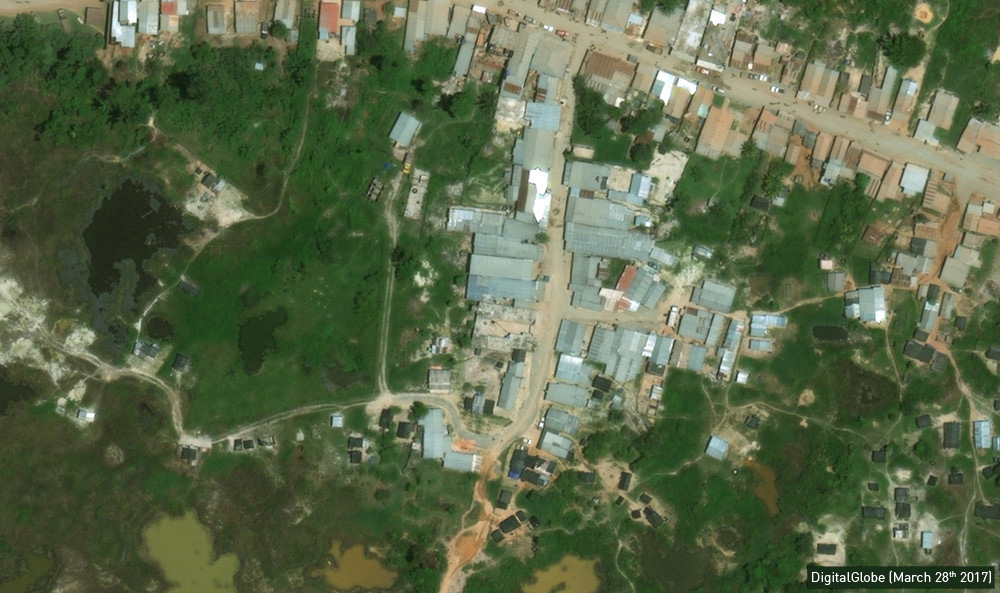 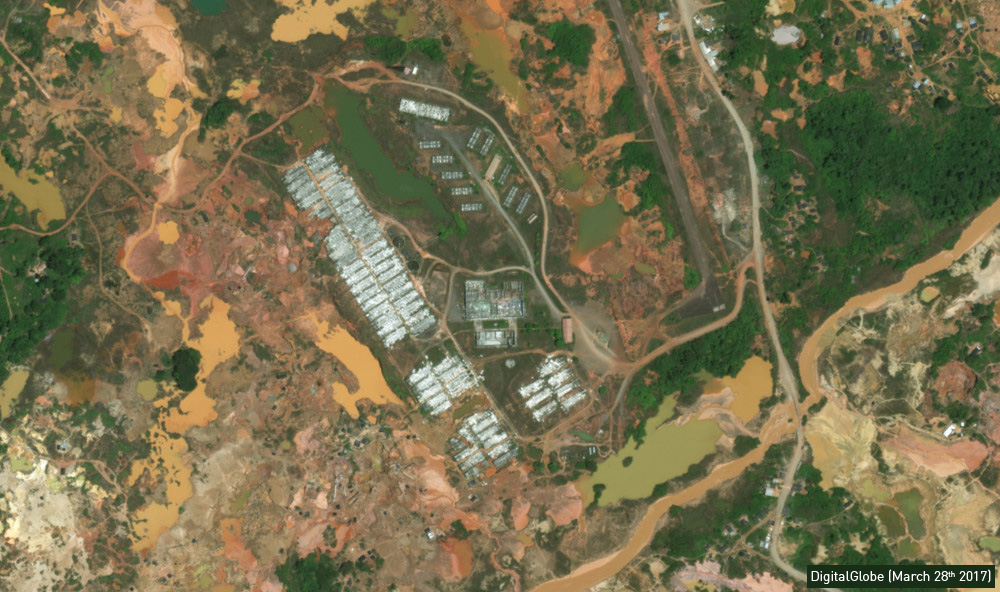 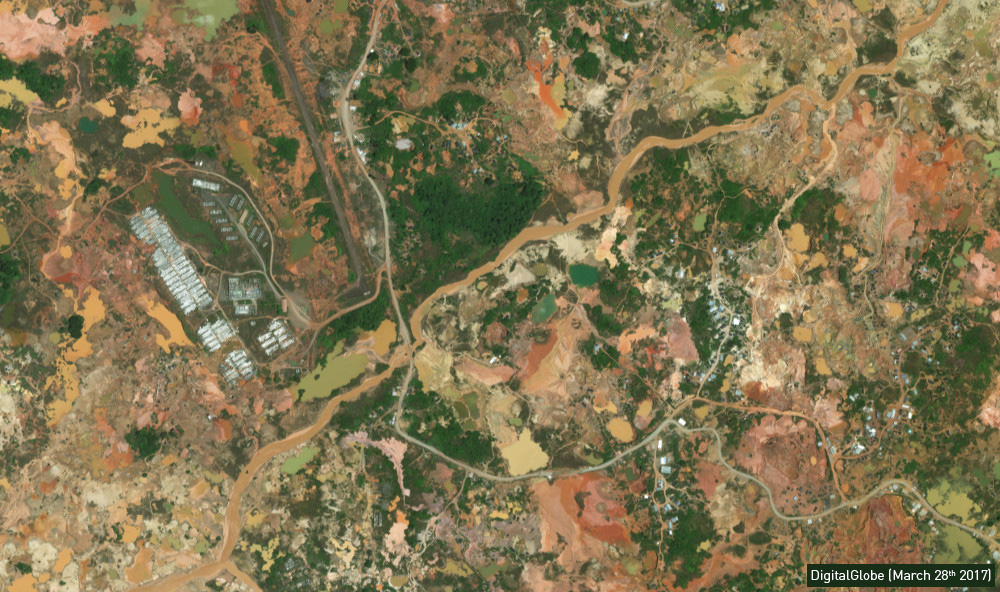 Previous Next
The impact of the mining on the water, soil, and forests in the heart of Las Cristinas gold deposit is easily visible in this series of satellite images. The photographs shows extensive construction in the area -- including a runway, roads, and housing. The dark green areas show trees that remain standing, while the lighter green indicates bodies of water used to carry out hydraulic mining. The reddish areas are eroded earth and the orange ones are waste sediments extracted from the mine. (Image: DigitalGlobe. Analysis: Macroscope Media)

The destruction of the forests, as well as the contamination of the soil, air, and water with mercury, which is used to extract gold from crushed ore, appear to have spread to the nearby Canaima National Park, where mining and ore-processing are forbidden.

Canaima is the second-largest of Venezuela’s 43 national parks, occupying an area of 3 million hectares and including the municipalities of Piar, Roscio, Gran Sabana, and Sifontes in Bolivar state. Sixty-five percent of its territory is occupied by massive flat-topped mountain formations of a kind not found anywhere else in the world. It is the home of Angel Falls, which, at 979 meters, is the planet’s highest waterfall. Canaima National Park was declared a World Heritage Site by UNESCO in 1994.

An inspection carried out in May 2014 near the indigenous community of Campo Alegre by the Office of the Comptroller General of the Republic found that mining had caused “pollution damage to the main source of water of the Bolivar state and part of the Venezuelan territory, as well as to the ecosystem of the Canaima National Park.”

In its 2016 Annual Report, the Public Ministry reported 69 allegations of illegal mining in the states of Bolívar, Amazonas, and Delta Amacuro. It said that all the accused admitted their criminal responsibility, but that sanctions were limited to the planting of 42,250 trees in the devastated areas. There are no reports available on whether the sanctions were implemented.

The image below shows some of the damage caused by mining activity near Canaima National Park. 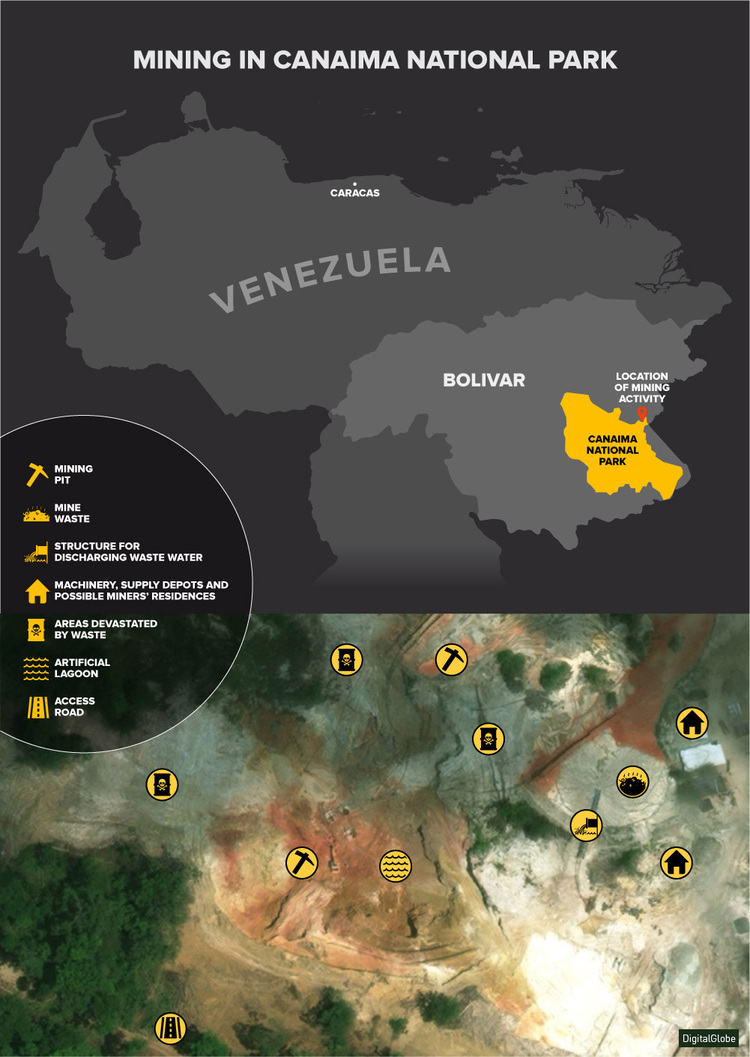 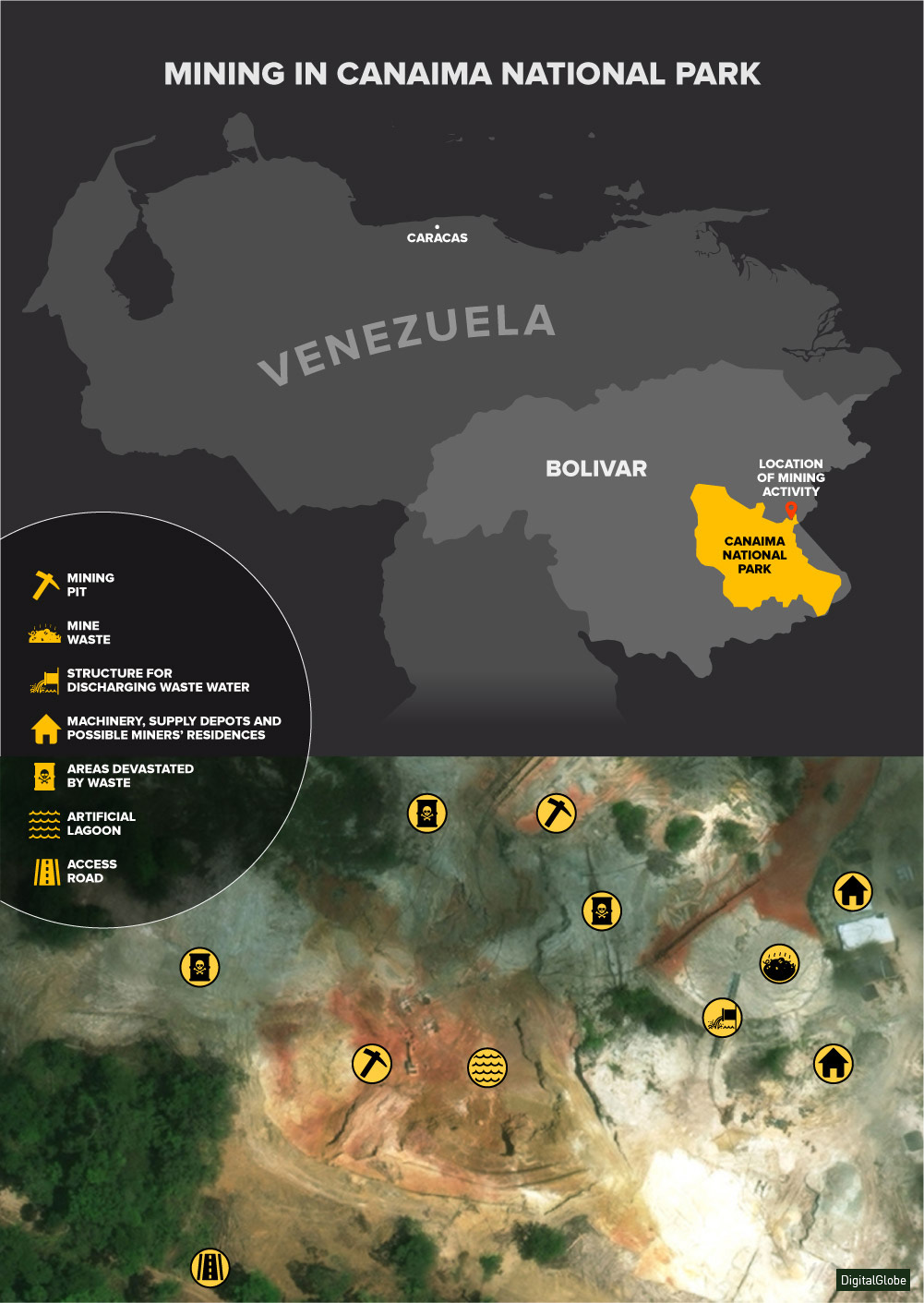 As a whole, NASA analyses show a steadily growing loss of forest cover in four municipalities of Bolivar state. The chart below conveys the scale of the losses between 2001 and 2014 – almost 106,000 hectares as a whole. 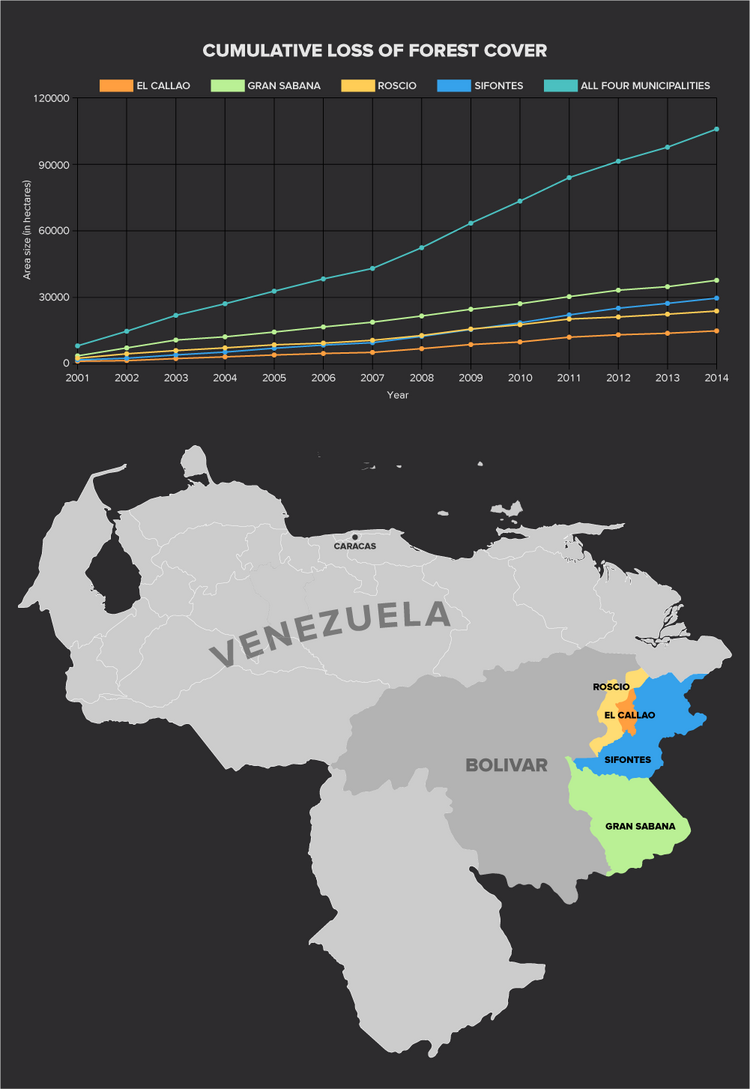 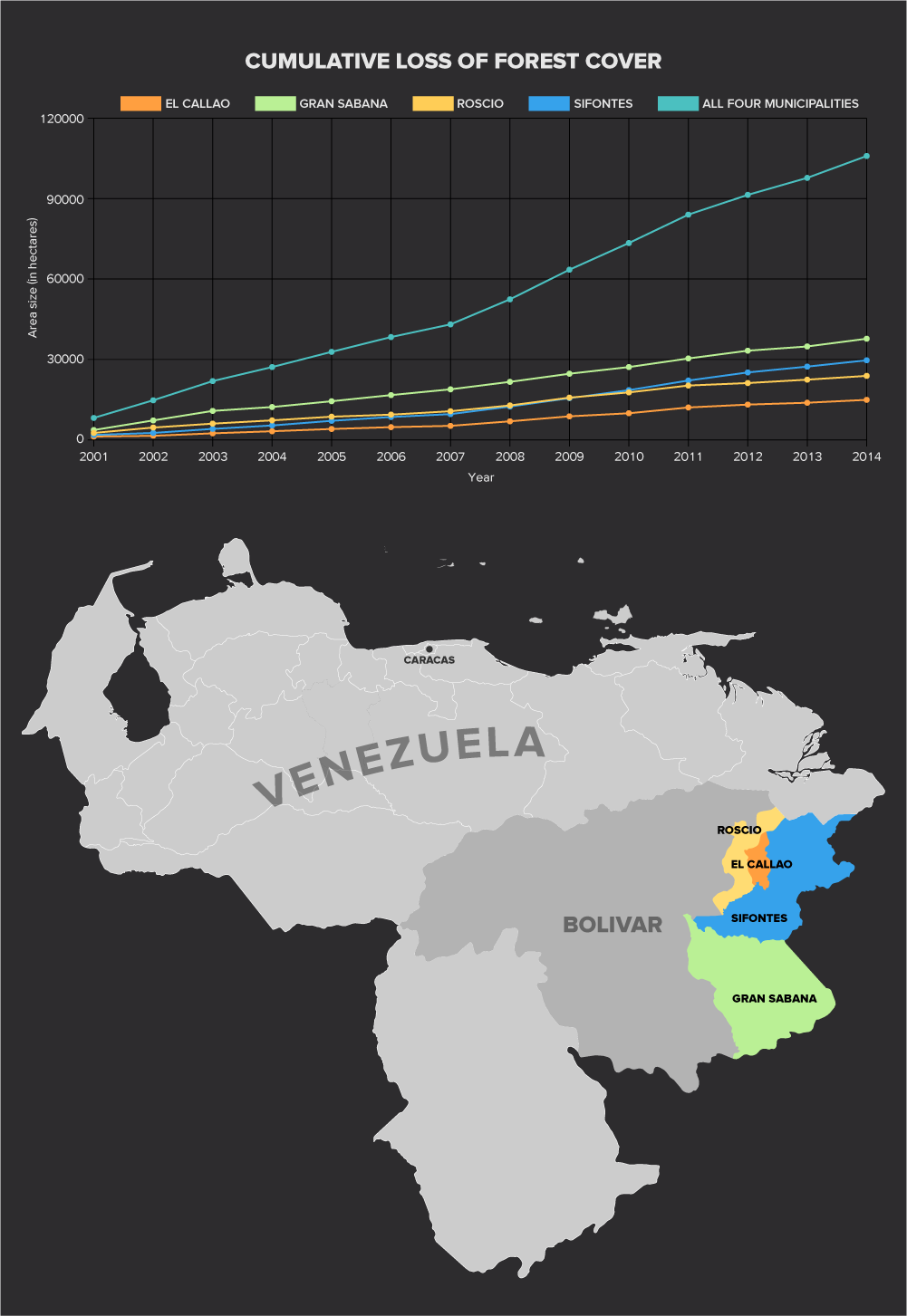 Correction, Oct. 19, 2017: The article has been updated to correctly credit Macroscope Media for the satellite image analysis. OCCRP regrets the error.