Gold and Chaos in Orinoco

A joint investigation by Efecto Cocuyo and OCCRP ​explores the Orinoco Mining Arc — the Venezuelan government's controversial attempt to find new sources of wealth — and the devastating effects of the mining on the people who live there.

Once Latin America’s richest country, Venezuela is now known around the world for political conflict and economic failure.

During the tenure of President Nicolás Maduro, the nation’s oil income has plummeted. The oil-driven economy followed suit, with GDP per capita falling by almost a third since 2013.

Now, even as security forces battle protesters in the streets, ordinary people must queue to buy food. Hyperinflation has made the currency nearly worthless. Even basic medicines are in short supply.

The project — called the “Orinoco Mining Arc” — aims to exploit the region’s largely untapped mineral wealth. In a territory south of the Orinoco river spanning nearly 112,000 square kilometers (larger than Bulgaria or Cuba) lie some of the country’s greatest mineral treasures: gold, diamonds, and coltan, a metallic ore crucial to the electronic and arms industries.

Maduro’s rhetoric was grand. “We have a clear national project which integrates all the wishes of the country,” a local television channel reported. “We are building the right to the future for a powerful Venezuela.”

But the challenges of mining this enormous area aren’t just logistical. The Orinoco Mining Arc is part of the Amazon River basin, an ecosystem of global interest for its immense biodiversity and for the 16 officially recognized indigenous peoples that have made it their home since ancient times.

The government made all the right promises, pledging to tap the wealth while respecting the environment, adjusting for socio-cultural impact, reinvesting revenues into benefits for the most vulnerable, and tackling the threat of organized crime.

Now, a year and a half after the Orinoco Mineral Arc was established, OCCRP reporters have visited the area to see what is going on for themselves.

What they found are unfulfilled promises.

The prospect of finding sufficient resources to offset the fall of oil prices remains elusive.

Despite assurances that unsafe practices would be banned, artisanal miners are still using deadly mercury to refine gold.

Moreover, the arrival of large-scale mining has fueled merciless disputes over the precious metals. It is a struggle dominated by mafia clans, government greed, a foreign company with its own mysterious agenda — and, ultimately, a lack of government control.

Maduro promised wealth and prosperity. What the people got instead was death, illness, gang rule, destruction to indigenous people, and environmental catastrophe.

Read on to learn more.

Crime loves a vacuum, and the tribal people of Venezuela’s Southern Bolivar region say years of neglect by the government gave gang lords free rein to seize control of the lucrative mining operations. The region is run like the country’s notorious prisons, they say—by the crime bosses.

As companies jostle for the chance to rip wealth from the Orinoco region, the natives tribes who have lived there for generations say they will not allow their heritage to be destroyed - even if they have only bows and arrows to defend it.

In 2011, as then-President Hugo Chavez nationalized the gold mining industry, the leftist leader claimed he had a new idea that would make life better for all Venezuelans. He described a new “mining arc” south of the Orinoco River, in the northern Amazon, that could be exploited for vast minerals.

Mercury in the Air, in the Water, in the People

Using circular motions, Misael Reyes massages soft wet mud over a copper plate, causing it to flow -- and reveal its riches. “Do you see that silver drop forming?” he asks. “That’s the mercury we use to start separating the gold from the ore we pull out of the mines and grind in these mills.”

Death of a Forest

High-resolution satellite images provided by DigitalGlobe and Landsat show the devastation caused by illegal mining in the Las Brisas-Las Cristinas gold mining area. Believed to be one of Venezuela’s richest areas of mineral deposits, this is the cornerstone of the Orinoco Mining Arc.

Where is the Orinoco Mining Arc? 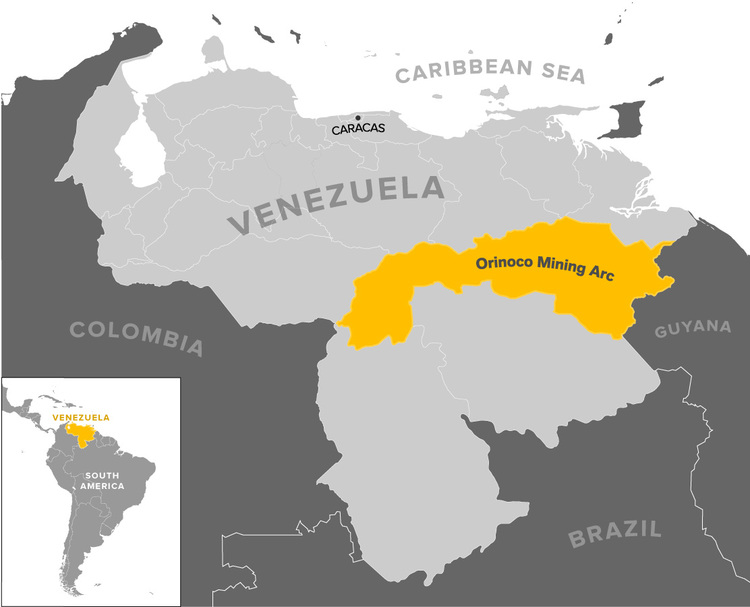 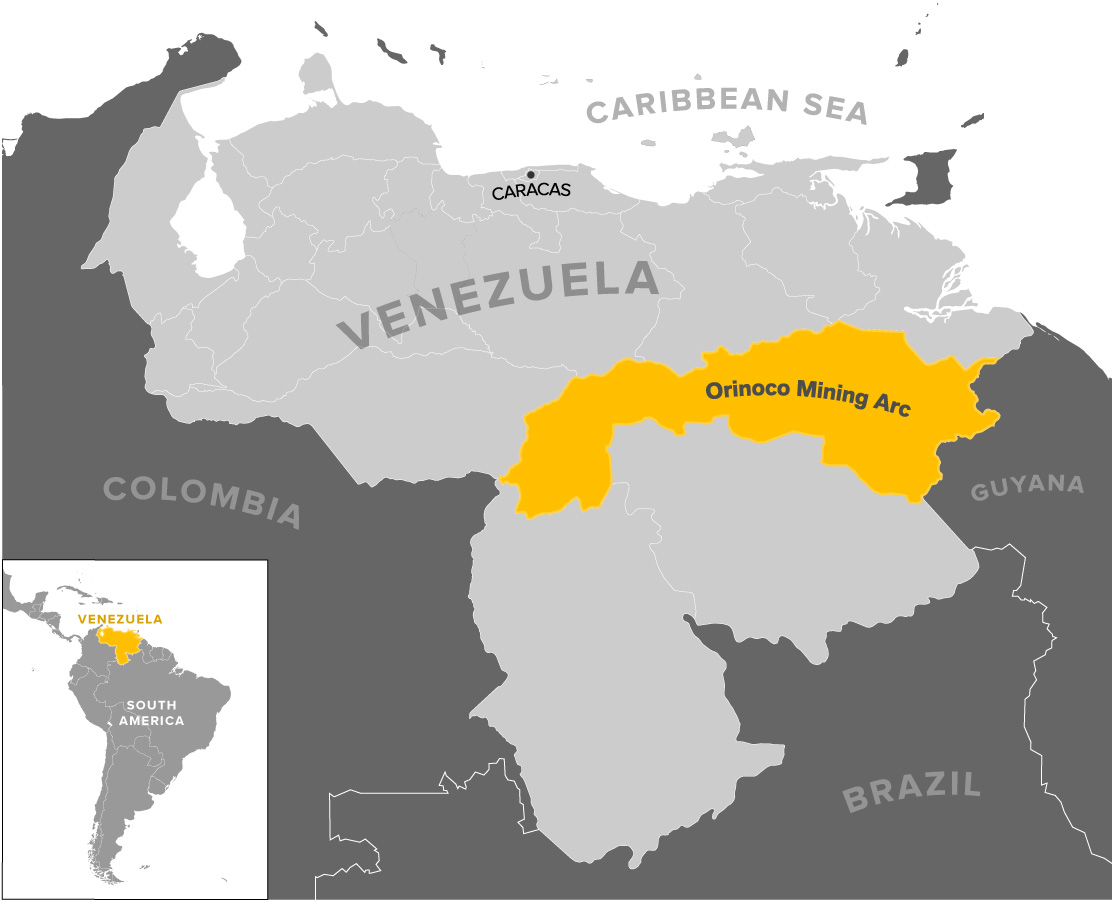