Critics say Georgia’s laws governing surveillance are unclear and should be revamped.

Thomas Hammarberg, the former Council of Europe’s human rights commissioner and now the European Union’s special adviser for legal and constitutional reform and human rights in Georgia, has urged the government to regulate when, and how, surveillance can be ordered and used; to set time limits; and to notify people that they have been observed after the surveillance is concluded.

Even if the government believes it has good reason to watch someone, he says, it can’t just do whatever it wants with the information it gathers.

“To use (recordings) for the purpose of blackmailing is criminal,” he said. “To keep them—to just have them—is also criminal. And, of course, to disseminate them, to leak them to others, is also criminal.”

According to Transparency International Georgia, Article 20 of the Georgian Constitution protects citizens’ private lives, “place of personal activity, personal records, correspondence, and communication by telephone or other technical means.”

If the government wants to listen to or record any of those protected areas, it is supposed to get permission from a judge. 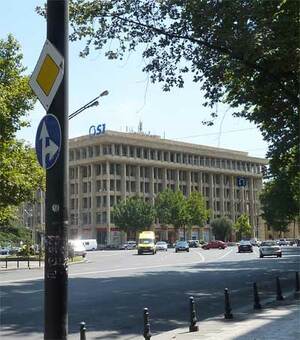 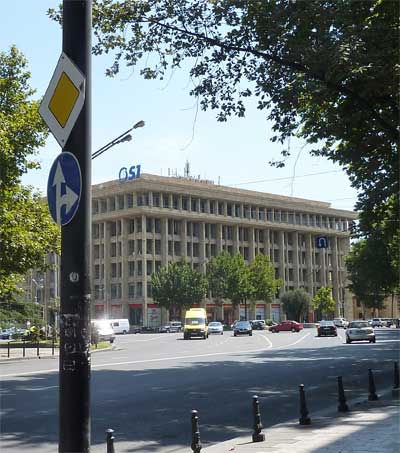 The government once stored thousands of files on the fifth floor of this building in the middle of busy Tiblisi. Today it's home to a popular supermarket.

It’s also illegal under the Criminal Code of Georgia to tap into private conversations or communications, or to disclose “personal or family secrets” obtained in this way. Finally the Law on Electronic Communication protects electronically transmitted information in most cases, and requires telecom employees to safeguard customers’ information.

In October 2012, the Georgian Young Lawyers’ Association (GYLA) won a ruling from the Constitutional Court requiring the government to obtain court orders before monitoring a citizen’s Internet traffic, the TI notes.

From the Rose Revolution of late 2003 until October of 2012, Georgia was run by politicians affiliated with the United National Movement (UNM). In October, the UNM was defeated by a group of political parties that formed the “Georgian Dream” coalition. In recent months the Ministry of Internal Affairs has reported finding several caches of surveillance materials collected during the UNM administration, at least some of which appear to be illegal invasions of personal privacy.

About 18,000 surveillance files have been found with more turning up every day. It is not clear how many violated various Georgian laws. The UNM administration did apply to the courts for many surveillance permits: in 2011, seeking more than 7,000 in Tbilisi alone; and in 2012, nearly 6,000.

The current “Georgian Dream” administration has continued to apply for permits (although at a slower pace), lodging nearly 1,200 requests as of May 2013.

But while the court system approved virtually every request prior to the October 2012 change in government, it is rejecting more now. In Tbilisi in 2011, 99.88 percent of requests were approved; in 2012 that was 99.79 percent, while in 2013, approvals dipped to 89 percent.

TI further produced an analysis of the principles and minimum standards for phone interception established by the European Court of Human Rights, and reports that Georgia’s legal framework provides insufficient safeguards.

And on April 29, Prime Minister Bidzina Ivanishvili and Minister of Internal Affairs Irakli Garibashvili told civil society representatives that illegal surveillance was over.

“There will be proper legislation, but the most important thing is to observe that legislation and there should be a strong reaction to every single case (of illegal surveillance) if it happens again,” said Ivanishvili.