The history of football in Bulgaria after 1989 included the murders of 15 leaders or owners of clubs and scores of others, an ugly side of the transition from communist dictatorship to market economy.

Georgi Iliev, considered the most powerful head of VIS, and his successor, Alexander Tasev, rounded out the chronicle of death. Over the past 12 years, six of those associated with the club’s leadership died violent deaths.

The murders seemed to stem from groups that had gained capital and then invested it in football, making the presidents high-profile operatives in a dangerous field.

The groups were made up of people from the most popular Bulgarian sport - wrestlers, who developed “security” firms and engaged in racketeering and murder to make the money that allowed them to invest in football.

From 1993, 15 leaders of just three football clubs were killed, among them the richest Bulgarian at the time of his death, Ilia Pavlov. Pavlov was a former wrestler and the founder of Multigrup in the 1990s, a company that engaged in gambling, car thefts and prostitution and that became powerful in many fields. 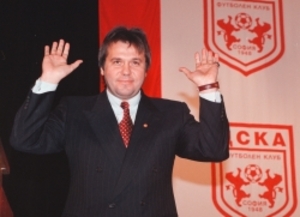 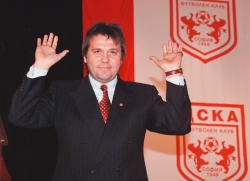 Ilia Pavlov’s career, though, was that of a young athlete who became connected with the structures of the communist State Security. For many Bulgarians in those times, this was an easy way to achieve higher social status and political influence.

When he was shot with one bullet in the heart in front of his office in Sofia on March 7, 2003, Pavlov was the president of Varna football club, “Black Sea,” which is now owned by another powerful economic group, TIM.

In his move to power he had inspired many like-minded wrestlers to follow his example in moving from Bulgaria’s favorite sport to a life of status and success. In 1995, he published an article in Duma daily—the newspaper of the Socialist Party in Bulgaria—saying that the wrestlers in Bulgaria should stop racketeering and become “normal” businessmen.

But in 2003, after getting a long-awaited U.S. citizenship, he had come back to Bulgaria to testify at the trial of the murder of Andrei Lukanov - twice prime minister and a member of the parliament who was killed in front of his home in October 1996.

He had married the daughter of Peter Chergilanov, a general of State Security, and the general introduced the young wrestler to the communist elite.

At the beginning of the 90s, Pavlov had made a dramatic change, to capitalist, rich man and leader of the country’s first private corporation. His former bodyguards, also wrestlers, became leaders of new security companies that grew rapidly into economically powerful conglomerates. 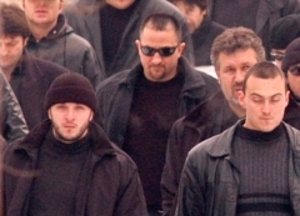 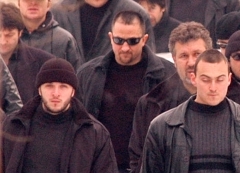 Pavlov’s adherents followed his leads, and they also invested in football teams. Some of his former bodyguards created SIK in Sofia, a company which has long controlled one of the biggest Bulgarian teams - “Slavia”.

Like Pavlov, though, many died in gansters battles in the streets of Sofia.

The string of death associated with SIK and its Slavia presidents started on January 19, 2004, when a bomb exploded in the elevator of the company building at 87 James Bourchier Blvd in Sofia. In the incident, Stoil Slavov, president of Interpetrolium and a SIK boss, along with three bodyguards, were killed.

Slavov was a close friend of the boss of Slavia’s president, Mladen Mihalev-Madjo. Mihalev-Madjo later went into hiding and lives in unknown location abroad because his life in Bulgaria is reportedly under constant threat.

Then, on September 30, 2004, in a restaurant-garden of the Slavia club, men masked as police broke in and gunned down Milcho Bonev - Bai Mile, and five of his bodyguards. 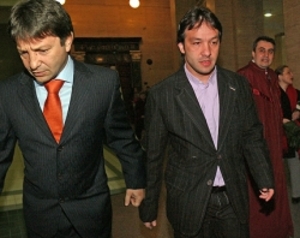 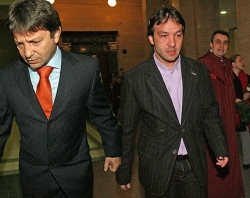 Milcho Bonev was one of the founders of SIK together with Krassimir Marinov-Margina, Dmitri “The Russian” Minev, Rumen Nikolov, Mihalev-Madjo and Ventsislav Stefanov.

Bonev was a former policeman who was also close to Mihalev-Madjo. He was responsible for transfers of players in Slavia and drew from Serbia team coaches Zharko Olarevich and Miodrag Yeshich.

After the murder of Bonev the SIK boss, Mihalev-Madjo, went into hiding and left control of Slavia in Stefanov’s hands. On April 6, 2004, Stefanov’s son, Dimitar, who was 23, was kidnapped. Nothing has been heard of him since.

Then, on October 24 of that year, another SIK founder, Dmitri Minev – The Russian, was shot with a single bullet.

Marinov and his brother, Nikolai, who had become enemies of Mihalev-Madjo, were detained for more than a year on charges of organizing three murders. Then the case against them was frozen and they were freed.

Death was not restricted to those associated with Slavia—or Sofia. The other most powerful controversial group, VIS, also acquired a football club–Lokomotiv–in Plovdiv. Even before the most powerful boss of VIS, Georgi Iliev, took over Lokomotiv, the club’s leadership had a high mortality rate. 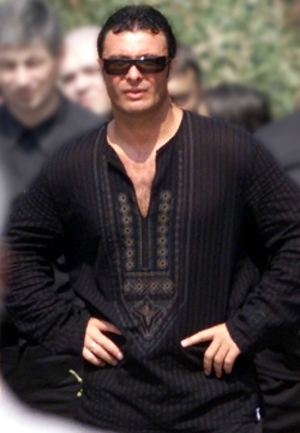 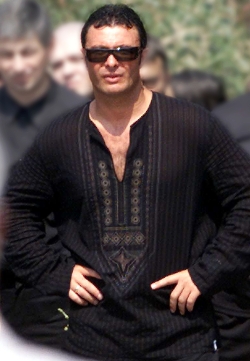 Georgi Iliev, considered the most powerful head of VIS, and his successor, Alexander Tasev, rounded out the chronicle of death. Over the past 12 years, six of those associated with the club’s leadership died violent deaths. And no killer was found.

The killing associated with Lokomotiv began with the death of George Kalapatirov, known as Joro The Italian. Another former wrestler, he went to Italy on business and came back rich enough to buy Lokomotiv’s the most popular team in Plovdiv, Bulgaria’s second largest city.

In December 1993 he and his friends, Peter “The Crutch” Petrov-Pesho and Nikolai Popov-Martenitsata, registered a company named Multisport and, through it, managed Lokomotiv.

Kalapatirov became one of the creators of the “777 Club” - a security organization that became known for blackmailing businesspeople and battles with other criminal groups. In early 1995 Kalapatirov and Petrov-Pesho left “777 Club” and became the representatives of VIS in Plovdiv.

On the night of April 6, 1995, Kalapatirov was shot in front of his car near Plovdiv, a bullet in his heart.

George Prodanov then took over the club. He was known for registereing a loan society “Ikar” in Plovidiv, the city’s first classic financial scam. 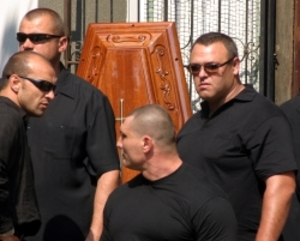 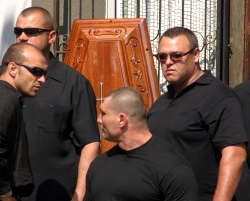 Then Petrov-Pesho, The Crutch, was killed. Until 1991 he was a national competitor in wrestling and was twice European vice champion and twice won silver medal in the Balkan championship.

On March 24, 1998, he was shot to death in front of his Plovdiv home, reportedly by a shot from a Kalashnikov.

The new leader of Lokomotiv was the third of the three who started the VIS unit–Popov-Martenitsata. He was shot dead on March 2, 2005, in Sofia, but had been bludgeoned first.

Then Georgi Iliev, the most powerful of the leaders of VIS and a longtime leader in the Lokomotiv club, was the club’s leader. Georgi Iliev had become boss of VIS in 1995, after his brother, Vassil Iliev, was killed. He was registered as a majority owner of Lokomotive as early as 2001 and now assumed the role of the top leader. He was shot in the heart by a sniper as he stood in front of the Buddha Bar in the Black Sea resort, Sunny Beach. 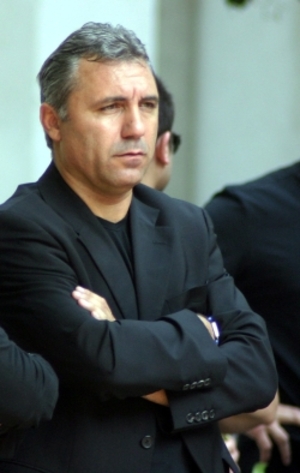 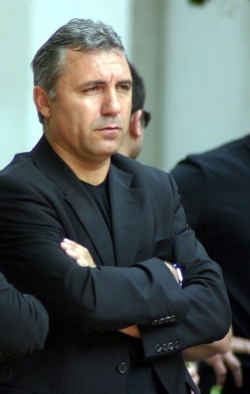 Credit: 24 Hours/Bulgaria Stoichkov at the funeral of Iliev.

Iliev had been celebrating with his players less than an hour before he was shot, kissing them and congratulating them on a win over their Belgrade rival in the second presliminary round for the UEFA Cup.

Iliev’s widow, Maya, sold the team in 2005 to Alexander Tasev-Ostap, a businessman from Iliev’s home town, Kyustendil. Soon, on May 14 of that year, he was found shot in his luxury Mercedes in the luxury district of Boyna, near his home.

Tasev-Ostap had become known as one of the richest men in Southwestern Bulgaria. He was known as the largest purchaser and exporter of cherries, had a footwear factory in Kyustendil and a local factory for wine production and he also dealt in petroleum products.

In the parliamentary elections in 1997 Alexander Tasev was leader of the list of the Bulgarian Business Bloc in Kyustendil, but failed to enter in the parliament.

That, so far, is the toll of Lokomotiv presidents. But taking into account those who were associated with Lokomotiv, Slavia and Ilia Pavlov, the man that so many of these people idolized and followed, it is estimated that since the beginning of the transition in Bulgaria the number of those killed who were linked to football is about 200.