Blood on the Water

Few sounds pierce the silence of Mataje Nuevo, an Ecuadorian village on the Mataje River, which marks the country’s border with Colombia. Laughing children play in a yard, but there’s no other movement. Doors and windows remain shut even in the stifling heat. The Fronterita diner — the only one on the main road — stands empty, as does the sports facility.

Nearby, several women wash clothes and kitchen utensils in a creek. The garments slap against wooden boards. Half immersed in the water, the women ignore reporters’ greetings, keeping their eyes on their work. They know if the media is here, the soldiers probably are, too. 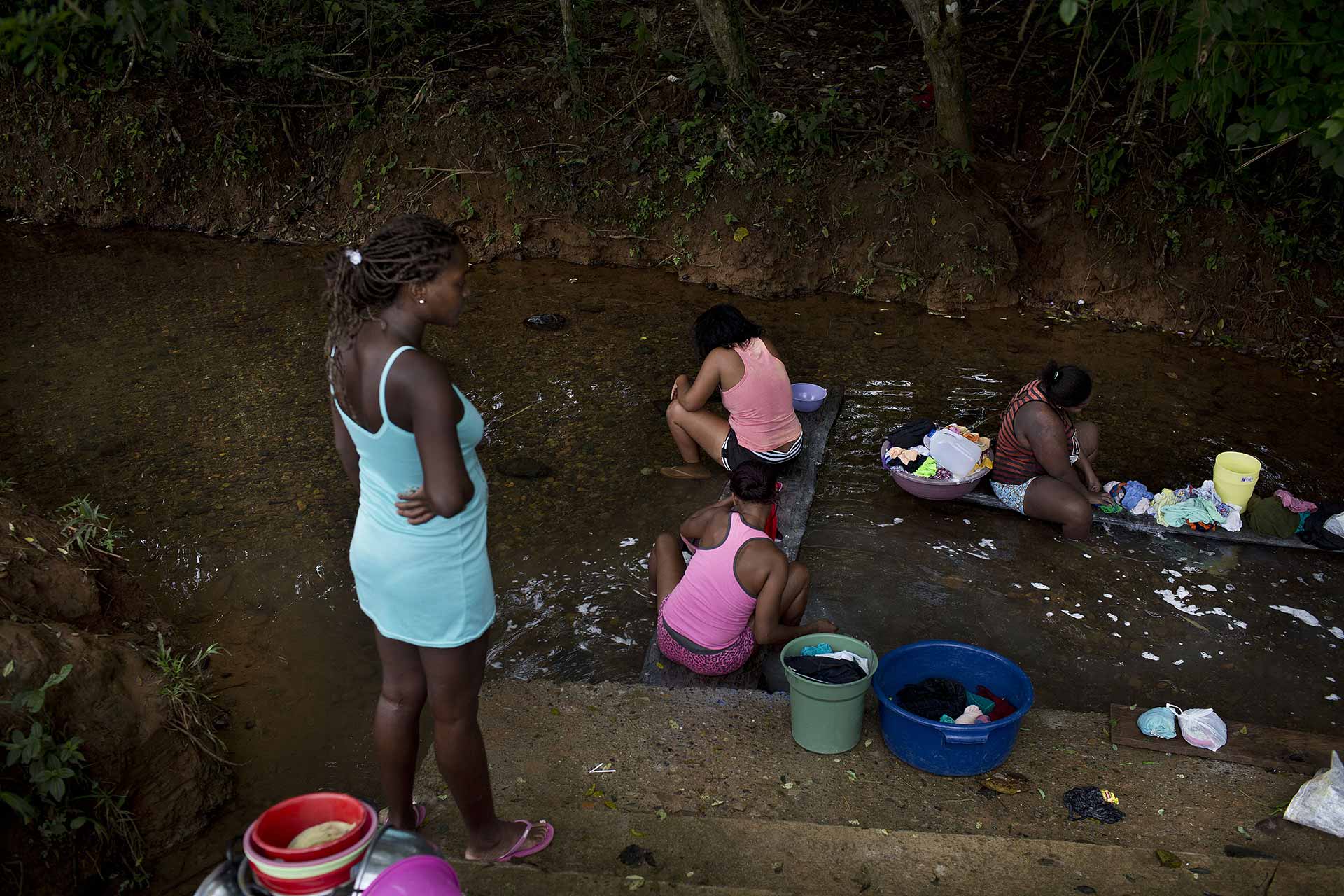 The only way outsiders, even government officials, can enter the village is with a military escort. Security was stepped up after two journalists and a driver from Ecuador’s El Comercio newspaper were kidnapped here this past March by a Colombian guerilla group.

On a visit this August, reporters following up on their deaths are accompanied by a truck carrying 20 heavily armed soldiers and a convoy of four vans. There are also men in plain clothes wearing bulletproof vests. A drone flies overhead, on the lookout for any signs of a surprise attack.

The group appears to make the locals uncomfortable, and soon enough they make their displeasure felt.

It starts with a reggaeton blast, played from a private home at full volume. “This is how they warn the other side that we’re here,” explains a soldier, referring to the Colombian drug gangs lurking across the river. Sometimes the locals rev up their chainsaws instead. After 15 minutes, the soldiers warn that it’s time to go.

The Mataje River, a natural border between Ecuador and Colombia for almost 30 kilometers before it flows into the Pacific Ocean, is one of South America’s busiest drug routes. The Colombian province on the other side, Narino, is the country’s largest coca-growing area. The drug traffickers use boats to move 600 kilogram loads of cocaine four times a week. At the mouth of the river, the drugs are loaded onto larger ships that sail to the high seas.

The thick jungle is permeated by drug gangs, paramilitaries, and anti-government fighters; groups between which there is often little distinction. Despite aggressive military operations by both Colombia and Ecuador this year, government influence is limited. The drug gangs live here. Their word is law.

Credit: Periodistas sin Cadenas An Ecuadorian army checkpoint on the road to Mataje, a town on the border with Colombia. Traffic to this area has been restricted since four Ecuadorian soldiers were killed in March.

Mataje Viejo, the older part of the village, is 700 meters away, accessible only by a dirt road that disappears into the bush. On that same path on March 20, three soldiers in a military patrol were killed by an explosive device, and a fourth died later. Their deaths spurred the doomed journalists to come investigate.

Since then, Mataje has been closed to outsiders. On the road, police and army checkpoints control the traffic. Even doctors and nurses have to enter under military protection.

A two-story concrete house with reflective windows and a metal door — the only one on the road — stands between several wooden huts with rusty tin roofs. Inside, it boasts amenities rarely found in Mataje, including metal staircases and tiled floors.

The unusual house belongs to the mother of Walter Patricio Arizala Vernaza, also known as El Guacho. Though an Ecuadorian citizen, he leads the Oliver Sinisterra Front, the Colombian guerilla group that kidnapped and murdered the journalists.

Its origins lie with the Colombian FARC, which laid down its arms in 2016 after a peace deal with the government ended decades of war. Many local middlemen kept their weapons, their drug businesses, and their territories, renaming themselves the Oliver Sinisterra Front in honor of a fallen leader.

After the journalists’ murders, government agents raided Guacho’s mother’s house. On two computers, they found evidence that the guerilla leader’s political connections were still active. In an exchange with Gentil Duarte, another former FARC leader, Guacho is instructed to “continue forging the authentic FARC revolutionary army, alive today more than ever.”

Credit: Periodistas sin Cadenas Farmers in a coca field near El Tandil, a small town in Colombia’s Narino Province. In October 2017, eight peasants were killed in the town, caught in the crossfire between police and drug traffickers. Two officers have since been charged.

In reality, the Oliver Sinisterra Front’s activities have more to do with cocaine than with politics.

Its battle against other guerillas for control of the drug trade is felt all along the border. Between January 2017 and August 2018, 88 incidents attributed to illegal groups were recorded by the Ideas Para la Paz foundation, a Colombian think tank that specializes in armed conflict analysis. They include open skirmishes, attacks on security forces, explosions, and civilian displacements.

Fifteen of these events took place in Ecuadorian territory, according to a report by the organization. The Oliver Sinisterra Front is responsible for much of the violence. The report cites a former member explaining that the group uses the Mataje and Mira rivers to transport cocaine, ammunition, and food.

Civilians on both sides of the river are exploited by the drug runners. In Mataje Nuevo, a witness said the guerillas pay people to hide cash and weapons. Coca leaves are transformed into cocaine in laboratories, nicknamed “kitchens,” hidden in the jungle near Campanita, a town eight kilometers upstream. A judicial official who spoke on condition of anonymity said that this part of the border also supplies fuel and chemicals, essential ingredients for making cocaine.

The industry has sparked violence for decades.

February 2001 was a tragic month in Mataje. That’s when Milton Guerrero Segura, the town’s government representative, was kidnapped. His body, along with those of his daughter, his brother, his cousin, and an associate, were later found by police. They had mutilated fingers, slit throats, and gunshot wounds.

According to police, it had been a settling of scores. Guerrero had apparently ordered a drug seizure and, according to some newspapers, kept part of the shipment. Authorities blamed Colombian drug lords without specifying who. A message from the kidnappers was found and published in a local newspaper: “It is a lesson so everybody knows that no one can interfere with us.”

Credit: Periodistas sin Cadenas A man working at a cocaine laboratory in El Tandil, a town in Colombia, near the border with Ecuador. The words on his t-shirt read “I play for peace in Colombia.”

A City of Slaughter

North of the border in Tumaco, an oceanside Colombian city less than 40 kilometers from the Mataje river estuary, hopes of a new era after the government’s deal with the FARC faded quickly. Fear still dominates the streets. Few people dare even to talk to journalists, much less be recorded. They seldom report crime to the authorities for fear of reprisals. Indeed, a government report found that some local officials were in league with the drug traffickers.

With 147 murders in the first half of 2018, Tumaco is one of Colombia’s deadliest places. In May, the Office of the Inspector General released a report that identified seven neighborhoods where drug gangs use special houses to torture, kill, and dismember their victims before throwing their remains in the Pacific Ocean.

Anny Castillo, Tumaco’s ombudsperson, explains that the reason people don’t talk is for their own protection. “Social leaders are fleeing the city’s critical areas. Many communities are orphans, they’ve lost their guidance,” she says. José Silvio Cortés Pay, a leader of the indigenous Awá people, is even blunter: “One walks with fear and goes to sleep with fear.”

The land around Tumaco has the highest concentration of coca crops in the world. The potential for profit has attracted numerous guerrilla groups: the Ejército de Liberación Nacional, the Guerrillas Unidas del Pacífico, the Autodefensas Gaitanistas de Colombia, Gaula NP, and Las Lágrimas. All these groups fight for control of the region’s rainforests, rivers, estuaries, and beaches.

Security expert Fernando Carrión says that these groups also have links to Mexican cartels such as Sinaloa, Jalisco Nueva Generación, and the Gulf cartel, which hire locals to cultivate, produce, and transfer cocaine.

During this troubled period, El Comercio, the newspaper that employed the murdered journalists, built a reporting network and established a permanent foothold in the Mataje River region to investigate the armed groups.

Ortega, one of the slain men, led a team. His colleague Fernando Medina led another. What they found in the poverty-stricken region drew their attention: Village stores that sold jewelry for over US$ 1,400; stories of a party hosted by a drug lord where bottles of whiskey, tequila, and rum that cost up to $200 apiece were consumed by the dozens.

Ortega carried on his work while trying to take precautions.

There were warning signs. Just two days before Ortega’s fateful visit, another Ecuadorian journalist had also been to Mataje. Christian Torres, from the state-owned newspaper El Telegrafo, convinced soldiers at the checkpoint to let him in. Their only recommendation was that he cover the yellow license plate that identified his car as a government vehicle. Torres cut his visit to just 10 minutes after spotting two men approaching on a motorcycle, one brandishing what looked like a gun.

Credit: Periodistas sin Cadenas A cemetery in Limones, an Ecuadorian town near the border with Colombia. From January to August 2018, 58 people were murdered in Esmeraldas province. That homicide rate has jumped by 31 percent compared with 2017.

Many other Ecuadorian journalists have reported from the Mataje River. Few sensed immediate danger as Torres had, but it was clear that they weren’t welcome. Some shopkeepers wouldn’t even sell them water. Boatmen refused to ferry them. When they drove through villages, they would hear cries of “Sapos!” (“Toads!”) — a common slur for informants. Children approached radio reporters and told them to stop recording.

In January, Francisco Garces, from the Ecuavisa TV station, traveled to Mataje to report on a car bomb that had exploded at a police station in San Lorenzo, wounding 28. It was a kind of aggression Ecuador had never seen.

In the village, he encountered a group of men drinking on the street. None answered his greetings. When he finally convinced someone to give him an interview, a young man tried to snatch his camera. More locals surrounded Garces and told him to leave Mataje.

The situation was little different in August.

In Mataje Nuevo, Ecuadorian army Colonel Milton Rodriguez greeted a young man who carried a baby. Without replying, the man crossed to the other side of the street. Two other men working outdoors also ignored the colonel. The military jeep tour through Mataje, including two quick stops for interviews, lasted only twenty minutes.

As a military unit prepared for a patrol in the jungle, a woman shouted to journalists: “Why are you recording me? Don’t record me!” and covered her face.

Taxpayers were forced to shoulder some of the burden of salvaging Darko Horvat’s business empire after it collapsed under more than $340 million in debt. Horvat, who stepped away from his businesses in 2009, has faded from the public scene — but he didn’t leave a poor man.

He allegedly used a network of secretive trust funds, investigated for money laundering and masking payments for public officials.

As Ivory Coast descended into a violent political crisis, Semlex and Gunvor tried to help its pariah regime buy weapons in violation of a U.N. arms embargo.

OCCRP and media partners from across Europe collected over 20 billion euros’ worth of COVID-19 contracts and tenders. Explore our data interactive to learn more about what we found, from pricey masks to a hydroxychloroquine boom.