Authorities at JFK airport arrested a US citizen for fowl play on Sunday after finding 34 competition-bound finches squeezed into hair curlers in his carry-on bag. 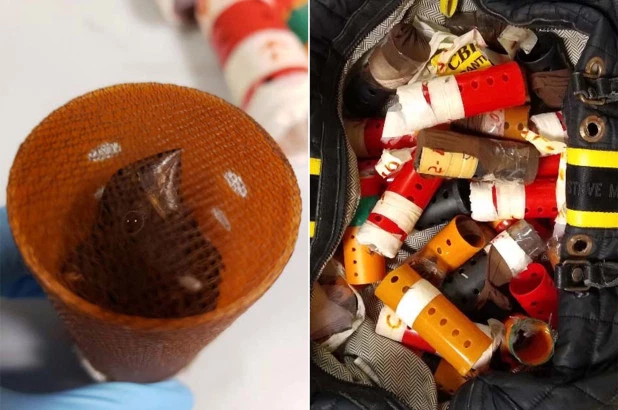 (Finches are often hidden in plastic hair rollers / USFWS)Francis Gurahoo, 39, was trying to smuggle the birds from Guyana to New York City and did not declare that he was entering the United States with wildlife.

According to a complaint filed with the Eastern District of New York by an agent from the United States Fish and Wildlife Service (USFWS), this is just the latest incident in a string of illegal Guyanese finch trafficking attempts that have descended upon the city in the last several years.

In Brooklyn and Queens, as in Guyana, finches have become a popular form of entertainment, where they are pitted against one another in chirping competitions sometimes held in public parks.

In these contests, the finch that is judged to have the “best voice” becomes significantly more valuable, and can sell for up to US$5,000, according to the USFWS complaint.

Though some finch species are native to New York, Guyanese finches are famous for their beautiful chirping, and are therefore worth much more money. Gurahoo had intended to sell his birds for a total of $102,000, or roughly $3,000 per bird, the complaint said.

It also indicated that Gurahoo admitted he was aware that smuggling the small birds into the country was "wrong", but was nonetheless motivated by this potential financial gain.

Another high-profile finch smuggling attempt was intercepted in December, when a Guyanese man tried to smuggle 70 finches into the country in a duffle bag. At the time, the New York Times reported that smugglers often feed the tiny birds with a drop of rum to “calm their nerves” before a flight.

Pursuant to federal regulations, Gurahoo’s 34 finches will be quarantined at the airport for 30 days.