As opposition leader Juan Guaido’s battle to overthrow Venezuelan President Nicolas Maduro was making international headlines, some in his interim government were spending aid money on lavish dinners, hotels, nightclubs and shopping trips, according to a PanAm Post investigation published on Friday. 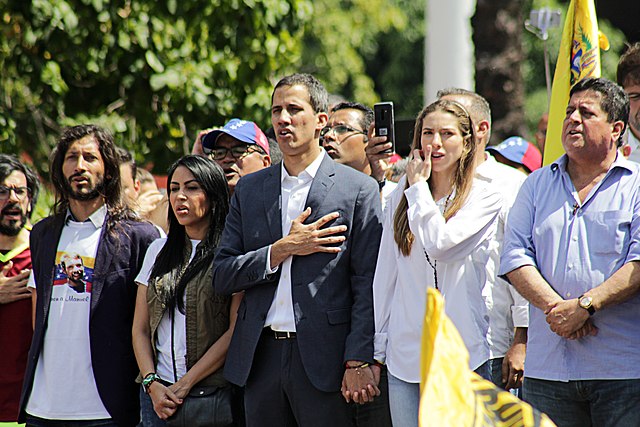 Juan Guaido, Venezuelan opposition leader (Alexcocopro, CC4.0)The Miami-based publication focusing on South American and North American news claims that officials Rossana Barrera and Kevin Rojas misused the aid money that was supposed to be spent on seven hotels to house soldiers, five of which were paid for by UNHCR and the Colombian government.

Instead, the army partied, hotels lost money and Barrera and Rojas continued to hemorrhage cash as they lied about the number of defecting soldiers.

In January, Guaido declared himself interim president after saying the 2018 election of Nicolas Maduro was fraudulent. Over 50 countries have backed Guaido and donated humanitarian aid.

PanAm says that 60% of the food aid at Cúcuta, a Colombian town on the western border of Venezuela, donated by allies of the Guaido government was rotten because Barrera and Rojas ignored the secondary part of their job-- distribution. Sources told PanAm that they expect the food to be burned.

Originally, Barrera and Rojas were put in charge of overseeing the housing of Guaido’s opposition army at the end of February. At that time, Guaido was reporting 240 military officials had joined his opposition government.

Part of the draw of joining Guaido’s army was the fact that defecting soldiers would be treated like heroes. They and their families would be housed in Cúcuta hotels, given food and medicine, according to the PanAm report.

A source told PanAm that the army enjoyed, “prostitutes, alcohol and violence. The President’s small army left a bad impression in Cúcuta.”

As the defectors partied, Barrera and Rojas continued to conflate the numbers of soldiers. In April, the Guaido government reported 1,285 soldiers had joined their ranks. But, intelligence gathered by the Colombian government put the figure closer to 700.

Neither of the two hotels Guaido said he would pay for had been compensated for three months. In May, after having lost nearly US$20,000, Hotel Ácora kicked 65 soldiers and their families out.

Humberto Calderón Berti, Guaido’s Colombian ambassador, had tried to pay the hotel nearly $8,000 but the check bounced. A hotel source told PanAm that the money came from Berti’s own pocket as he tried to fix Barrera and Rojas’ mess. The Columbian government ended up settling the bill.

UNHCR and the Colombian government continued to write blank checks for Barrera and Rojas. Expense reports from between the end of February and April total over $77,000.

Then in early May, the duo, running out of money, tried to organize a charity dinner to raise funds for the soldiers and their families at the upscale Pajares Salina restaurant in Bogota.

But, the dinner was canceled because embassies in Bogota refused to sponsor such an event.

By this time, Guaido was aware of the embezzlement and fired Barrera and Rojas. Guaido did not respond to an interview request for the story, PamAm reported.

Barrera submitted an audit on May 27 requested by the Colombian government. She reported an expenditure of $100,000 but sources told PanAm that the true number is much higher.

It’s unclear what will happen next in the case. According to Reuters Guaido told supporters during a speech in Merida on Saturday that his administration “will investigate this thoroughly. Every cent of public funds should be sacred, and that is something we have to learn as a society.”