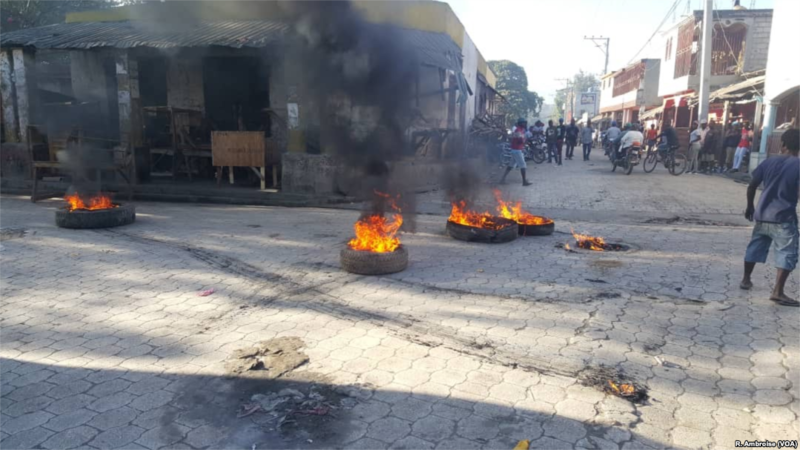 Haitian protests (source: www.voanews.comThe thousands of protestors who filled the streets of the capital Port-au-Prince demanded the removal of President Jovenel Moise for alleged corruption. Similar demonstrations were held in other Haitian cities.

Police spokesperson Michel-Ange Jeunes confirmed that an unknown individual had fired gunshots amidst protesters, killing two and injuring four others, according to France 24. A police officer was also injured by a thrown rock, he added.

A video also surfaced on social media showing a police officer spitting on a demonstrator who was lying on the ground. In response to a public outcry, the Haitian National Police released a statement on Monday stating that the matter would be investigated and any involved officers would face justice.

By the end of the protest, 12 people had been arrested.

The protests came after last week’s report, compiled by judges of the High Court of Auditors, which placed Moise at the heart of an embezzlement scam that had, for years, drained funds coming from Venezuelan oil shipments subsidized under the Petrocaribe program.

Under this program, Caribbean countries can pay part of the Venezuelan oil delivered to them upfront and the rest over 25 years at a low interest rate. The money they save in this scheme should go for infrastructure and social programs.

Petrocaribe, an oil alliance between Venezuela and Caribbean countries, has previously been the subject of investigation by the Haitian senate, which has sought to determine whether the alliance's funds had been misspent by previous administrations.

According to France 24, the recent auditor report revealed that in 2014 Haiti signed two contracts with two companies - Agritrans and Betexs - for a road repair project. Moise was the head of Agritrans before becoming president in 2017.

However the two firms have now been shown to have had the same tax registration numbers and personnel and that Agritrans received US$700,000 to complete the project but never fixed any roads.

In addition to Moise’s ousting, protestors called for an investigation into where the money ended up.

"We demand that all those squandering (public) funds be tried and punished, their assets seized and turned over to the state for serious development projects, and that the president resign and turn himself in," said Velina Charlier, a protest leader, per France 24.