Jersey, US, and Nigeria Divvy up Assets of Former Nigerian President

The Island of Jersey gave nearly US$270 million of Nigerian President Sani Abacha’s frozen assets to a Civil Asset Recovery Fund on Friday to be divided among Nigeria, the US and the UK island. 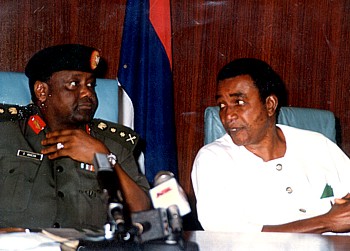 More than $450 million was frozen in 2014 by the US Department of Justice, in what it described as the biggest kleptocratic forfeiture in its history. Abacha, who died in 1998, is believed to have embezzled and stolen billions during five years as president and stashed most of it in accounts throughout Europe.

In 2016 Switzerland negotiated with Nigeria to return more than $300 million. The Swiss previously had returned about $700 million, the first time frozen assets in Europe had ever been returned to an African nation.

Nigeria made a deal with the Abacha family: dropping the charges against the president’s son, who was believed to have assisted in embezzling the money, in exchange for all of his father’s foreign funds.

Any money Jersey receives in its negotiations will be put into its Criminal Confiscation Funds, which are used to fund state grants for various projects.

“In restraining the funds at the request of the United States of America, through whose banking system the funds were laundered before arriving here, and in achieving the payment of the bulk of the funds into the Civil Asset Recovery Fund, Jersey has once again demonstrated its commitment to tackling international financial crime and money laundering,” Jersey’s Attorney General Robert MacRae QC said in a press release.

Jersey accounts have hidden corrupt transactions in the past, most notably in a bribery case in 2017 over hosting a film festival.