A UN report released this week details the various systems of bribery that are commonplace in the Democratic People’s Republic of Korea (North Korea), facilitating work, travel, and even personal freedom. 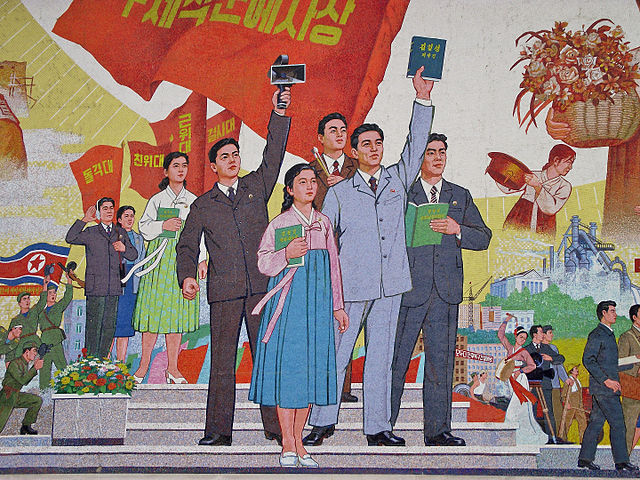 Propaganda of North Korea (Photo by Mark Fahey CC BY 2.0)The report, based on over 200 interviews with North Koreans who left the country, introduces some of the systemic issues of the state and the interdependence on corruption for the country to persist.

Its validity is contingent upon the experiences of those who have left the state, but opens a window into the typically closed-off lives of everyday North Koreans.

Work in North Korea extends beyond the state system of jobs, and many North Koreans have turned to a form of a private sector - referred to as the ‘informal’ sector by the UN - to get by. To sufficiently work outside of the system North Koreans are often forced to pay bribes to take off from work.

A 2017 book cited by the report claims that over half of companies employ workers who pay bribes to take time off, and that those bribes make up 5-10% of household expenditures.

“Access to work in the informal sector has become contingent on the payment of bribes to State officials, adding to the financial burden of an already struggling population,” the report reads.

The bribes are typically worth it, as a 2016 Foreign Affairs story that was cited by the report estimates that three in four North Koreans depend heavily on the private market.

The informal sector fills in the gaps where the state has struggled in the past. Often the distribution of goods or the needed production falls to those who work outside of the system.

Bribes not only fuel labor, but travel and basic freedoms as well. Though the right to travel is guaranteed by the state, checkpoints throughout the provinces provide headaches for those travelling without permits. Many North Koreans who left the country claim that they would bribe officials to receive permits, or bribe those who manned the checkpoints to secure passage.

An anonymous North Korean that the UN interviewed talked about how it was unfair that those with money could avoid imprisonment.

“I felt it unfair that one could bribe one’s way out when another suffers much more as a result of being unable to bribe,” they said. “Bribery is effective in North Korea. One cannot lead a life in North Korea if he or she does not bribe his or her way.”

The report offers a suggestion for why bribes are relatively commonplace amongst government officials: their livelihoods are also at stake.

“State officials are increasingly engaging in corruption in order to support their low or non-existent salaries,” a cited Commission of Inquiry reads.

The UN report offered a long list of recommendations on how to solve the country’s problems with bribes. Their strongest suggestions include fulfilling their stated obligations of food and economic security to the people, developing stronger anti-corruption measures and creating fair judicial practices.

The UN also recommended increased international cooperation while having sanctioned exports of oil, weapons and most financial transactions to the country, in addition to exports of food, some manufactured goods, and most valuable raw materials from the country on account of its weapons testing, essentially limiting the country’s economic growth.