Dutch and Luxembourg authorities,in collaboration with Europol, have shut down one of the best cryptocurrency mixing services in the world, Europol announced on Wednesday. 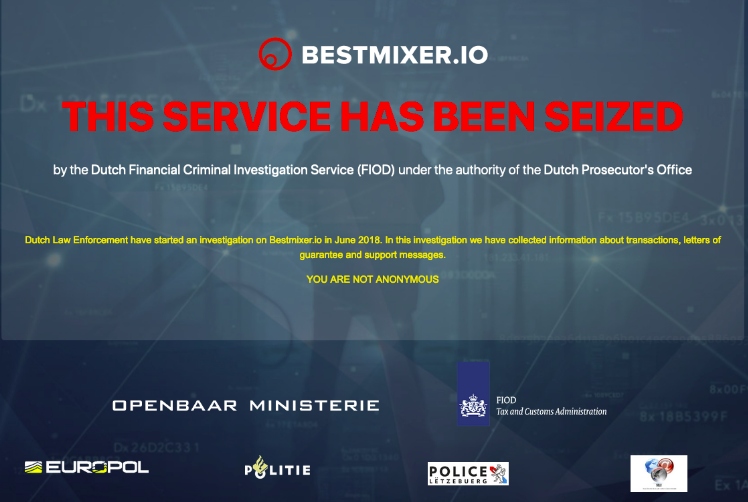 bestmixer website after seizureThe service, Bestmixer.io, was started in May 2018 and was one of the three largest cryptocurrency mixers. Services like this, also known as cryptocurrency tumblers, can be used to hide the origin of illicit funds by mixing them with legal transactions - this way laundering dirty money.

Bestmixer.io allowed users to mix the cryptocurrencies bitcoins, bitcoin cash, and litecoins with the guarantee that they would remain anonymous. Since its founding last year it achieved a turnover of at least US$200 million (about 27,000 bitcoins).

The investigation into Bestmixer.io was initiated shortly after the service’s founding, in June 2018. According to the press release, the Dutch Fiscal Information and Investigation Service (FIOD) worked with the internet security company McAfee on the investigation.

According to McAfee, mixing legally-obtained bitcoins from different transactions is itself not a crime. However, when tumbler services like Bestmixer.io advertise themselves as a way for users to avoid anti-laundering policies this signifies an active offer for money laundering.

On its website Bestmixer.io had a page that specifically described various anti-money laundering policies while explaining how its service would help users circumvent them through “absolute anonymity and freedom.”

The result was the seizure of six servers running in the Netherlands and Luxembourg. The investigation also found that many of the mixed cryptocurrencies on Bestmixer.io had criminal origins or destinations, and were likely being used to “conceal or launder criminal flows of money,” Europol said.

Additionally, FIOD gathered information on all the interactions that took place on the platform over the past year, including IP-addresses, transaction details, bitcoin addresses, and  chat messages.

Together FIOD and Europol will analyze the gathered information, before sharing intelligence packages with other countries.

According to a statement from FIOD, the users of Bestmixer.io are located all around the world, but are most concentrated in the United States, Germany, and the Netherlands.

It added that on an anonymous faction of the internet, known as the darknet, cryptocurrencies are commonly used, most often in relation to the criminal world, and typically through the use of mixers. The total turnover of darknet markets is equal to approximately $800 million per year.