The appellate court in Almaty upheld on Thursday charges against a Kazakh activist who during a marathon race filmed people holding a banner that read “You cannot run away from the truth,” which authorities interpreted as participating in an unauthorized rally. 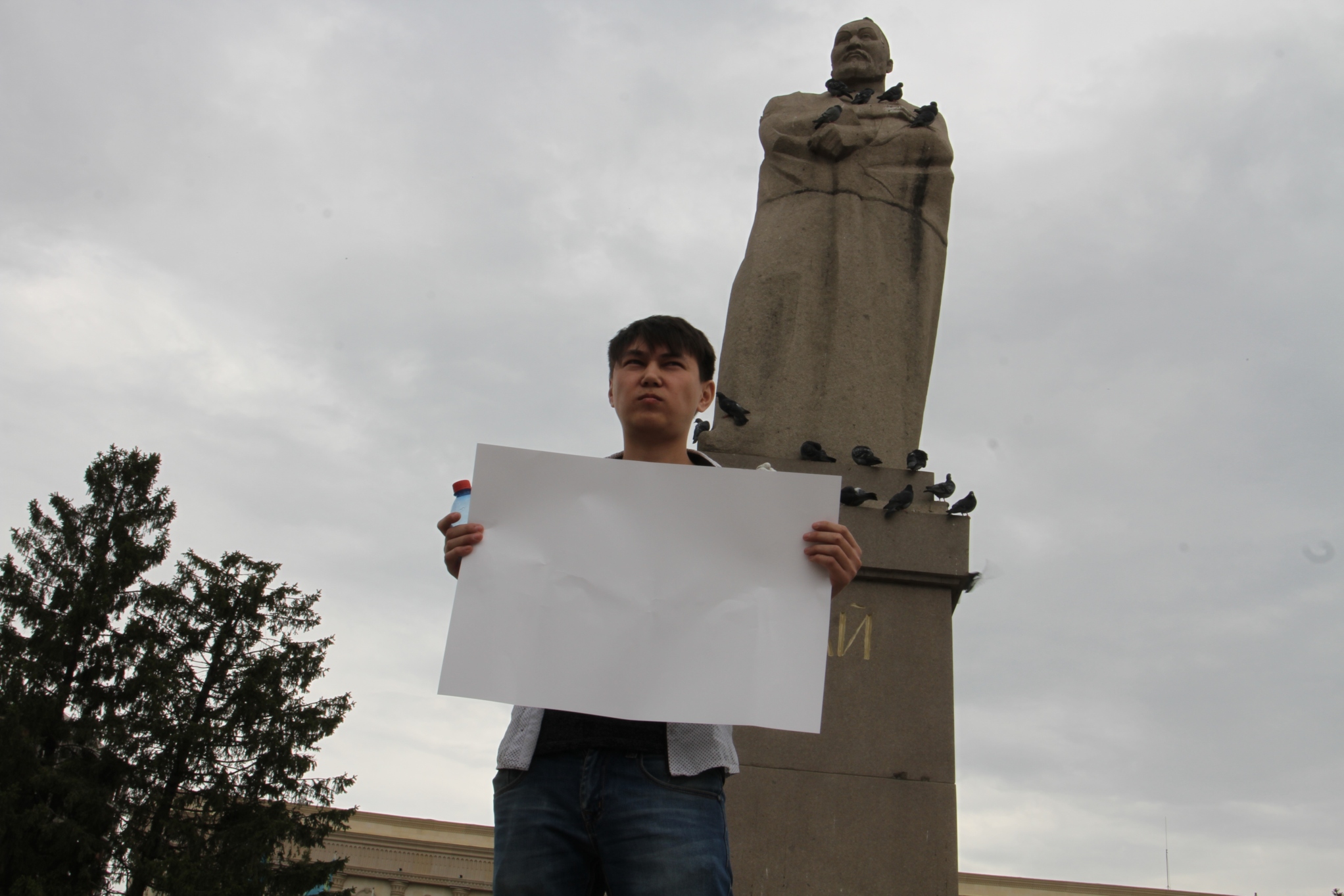 Aslan Sagutdinov (Photo: Yersin Merkhanov "Uralsk Week")Suinbike Suleymenova, along with two other people, received a fine for filming the banner.

Protesting the trial, a number of activists appeared in the courtroom with tapes over their mouth that read “uyat,” which means “shame” in Kazakh.

The trial is part of an ongoing clash between activists and the government over the lack of freedom of speech in the country that goes as far as people being fined or detained for holding any banner, even a blank piece of paper.

The feud has been simmering for quite some time but boiled over a month ago when Asiya Tulesova and Beybarys Tolymbekov were sentenced to two weeks in prison for holding the banner during the marathon.

The police report contained a completely different message as was written on the banner.

Police wrote that the two had written “The law about the nation’s leader is the shame of the nation.” However, during the trial, the officer who had written the report confessed that this was the wrong text and called it a “technical problem,” which made people in the courtroom burst into laughter.

During their confinement, Tulesova and Tolymbekov reported brutal behavior and pressure from the cellmates which were ignored by the detention authorities. Tulesova went on hunger strike for 10 days to protest the verdict.

Upon their release, Tolymbekov was conscripted and sent on Friday to a the military unit based in the Jambyl region of Kazakhstan. The unit is known for humiliating soldiers and according to media reports, eight soldiers who served it committed suicide over the past 12 years.

Military service is compulsory for most men in Kazakhstan and Tolymbekov planned to join the army but changed his mind after prison as he was afraid of possible harassment during the service. Despite his petition for delay and the medical assessment report that said he needs medical assistance the recruiters tracked him down.

Since the two displayed the banner on April 21, more than 20 people were detained during various protests and events.

Among them was Roman Zakharov, who ended up being fined for disturbing public order by flying a banner with a quote from the Constitution that said “The only source of governmental power are people.”

Not long after that, Aslan Sagutdinov was temporarily detained and questioned after he

displayed a blank piece of paper during his one-man protest in the city of Uralsk. His goal was to expose the absurdity of the system.

“People are surprised by the fact that we can be detained because of Constitution quotes or no slogans at all which the officials equate to terror threats,” he told OCCRP.

But, just like Tolymbekov, Sagutdinov has been notified that he will have to join the army, despite his heart problems.

According to Freedom House, Kazakhstan has been “not free” for nearly 20 years.

The country has been plagued by frequent blackouts of social media and news websites. Media legislature is becoming tougher and the suppression of independent news outlets, as well as harassment of journalists by government agencies depict the low level of freedom of speech in the country. Criminal charges are often filed for spreading false information when reporters write about high-level officials and the government has been attempting to control the Internet.

The Kazakh Constitution allows peaceful gatherings but in reality authorities suppress them.

Still, Kazakhs continue to fight for their rights through a series of protests that are being organized ahead of presidential elections in June - the first ones since Nursultan Nazarbayev, who ruled the country for almost 30 years, resigned in March.

Seven candidates are running for his seat and their campaigns are focused mainly on national identity, economical growth and fight against corruption. The least mentioned topics are human rights, ecology and foreign affairs.