A newly-published discussion paper on corruption in Papua New Guinea’s public sector found that low-level officials are often poorly informed about laws and regulations and are under intense pressure to grant favors to businesses, politicians and clan affiliates, contributing to existing patterns of corrupt behavior in the developing country. 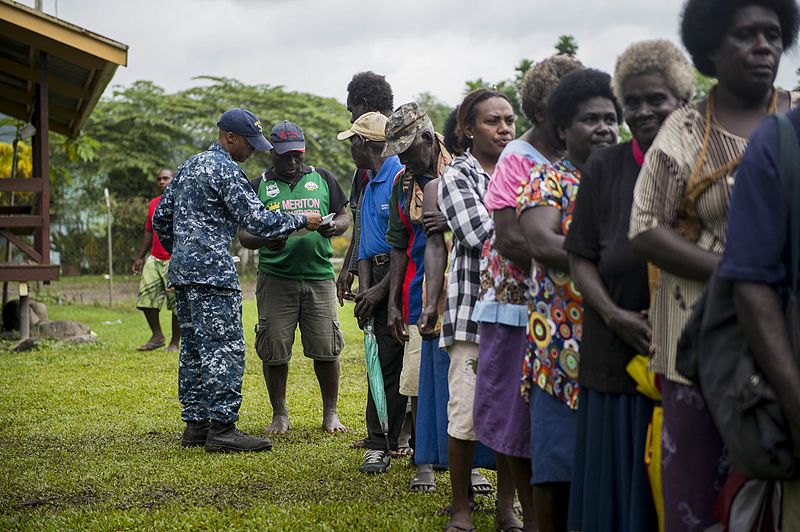 Patients line up to receive medical care in the Autonomous Region of Bougainville, Papua New Guinea (Photo: U.S. Air Force)The paper, “Governance and Corruption in PNG’s Public Service: Insights From Four Subnational Administrations,” was published this month by the Development Policy Centre, an aid and development policy think tank based out of Australian National University in Canberra.

Its author, Dr. Grant Walton, PhD, drew on interviews with 136 public servants across four provinces in Papua New Guinea in an effort to fill the empirical data gap on why public officials may support or resist corruption and poor governance.

Papua New Guinea tends to take a “top-down, one-size-fits-all approach when it comes to corruption,” Walton told OCCRP by phone. While monitoring efforts work in some provinces, they don’t in others, and PNG continues to face many problems associated with weak states: poor accountability, pressure from informal social systems and fear of reporting instances of graft.

Papua New Guinea (PNG) is one of the poorest countries in the Pacific, with nearly 40 percent of its population living below the national poverty line. While the country recently has started reaping the benefits of oil and gas extraction, its public health system is rapidly deteriorating—two-fifths of health centers and rural health posts have no electricity or essential medical equipment, according to the United Nations Development Programme.

“Public servants were ‘not doing it right’ because many were unaware of the overwhelming number of laws and guidelines governing their work,” Walton wrote. One mid-level male employee from Madang province said, “Right now as public servants, we are not given guidelines...There should be a duty statement [but] when I came in there was none, so I had to bring in my own.”

When the respondents were asked to define the biggest threats to ‘good governance,’ they named corruption, politics and PNG’s wantok system, which Walton defines as “a system of reciprocity between friendship and kinship groups.” More than 70 percent of respondents said their wantoks had asked them for a professional favor, such as help in obtaining employment.

Over the past two years, two-thirds of respondents had discovered an instance of corruption, but less than half of those who had uncovered malfeasance said they notified the proper authorities. Men and senior-level officials were more likely to report infractions, but 72 percent either agreed or strongly agreed that those who report corruption are likely to suffer negative consequences.

Political interference is also a great concern among officials, Walton found. In recent years, PNG has been pursuing a policy of decentralization, and in 2014 the parliament passed the District Development Authority Act, giving greater autonomy to local governments over how they allocate resources.

However, as members of parliament are now “often personally involved in deciding how this money is allocated and implemented,” lower level officials have grown frustrated. “We may plan for something else but when political interference comes we need to divert our efforts to suit what [MPs] want,” one senior female public servant said.

While over half of respondents (57 percent) knew how to report corruption, Walton says more needs to be done to inform officials about various forms of corruption and abuse of power and encourage them to take action against wrongdoers. An initiative called Phones Against Corruption works to get public servants to report corruption over the phone, but Walton says challenges remain for officials to trust the information they report will be used properly and anonymously.

As PNG’s government decentralizes, the government and the private sector have come into more frequent contact. Business influence on local governments, however, is “poorly monitored.” Walton also suggests that as regional governments become more autonomous, they diversify, and thus require unique policy recommendations.

Additionally, anti-graft authorities need to “target their communications to women,” and come up with more gender-sensitive methods to disclose graft, Walton told OCCRP. There is currently “a paucity of senior female leaders in public service” to whom lower-level female officials may feel more comfortable reporting corruption, and there aren’t enough female anti-corruption officers or police, he added.

While PNG improved its rating on Transparency International’s Corruption Perception Index last year, at 28 out of 100 (with 100 signifying “least corrupt”), it still scored well below the Asia Pacific regional average of 44.