Alabama lawmakers shelved last week a new bill that would have eliminated the current ban on public officials receiving gifts and reduce the penalties for low-level bribery convictions to misdemeanors. 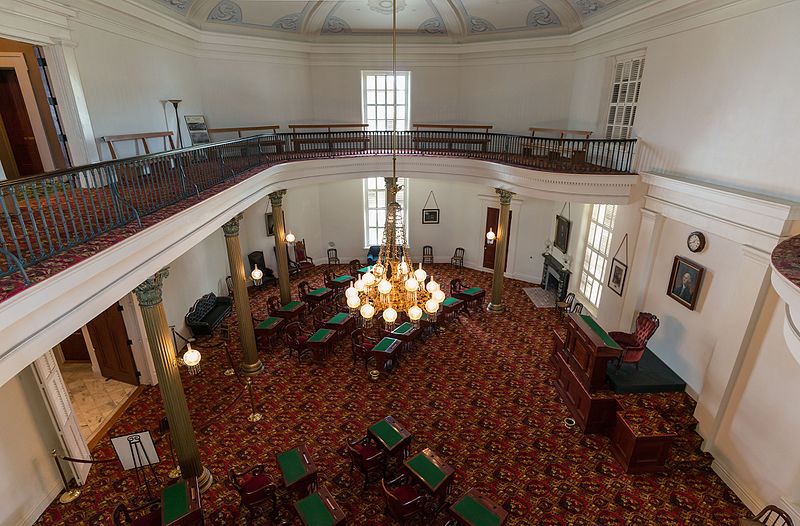 The interior of the former Senate chamber of the Alabama State Capitol. (Photo: Wikipedia, CC BY-SA 4.0)The move came after the proposal was criticized as having the potential to foster corruption.

The bill, SB 230, was proposed by State Senator Greg Albritton (R), who was elected to the Alabama House of Representatives in 2002 and to the Senate in 2014.

“I have a hard time seeing it coming back,” Senate Judiciary Committee Chairman Cam Ward told the Associated Press. “It’s just too controversial, too fast. There are a lot of questions in there, a lot of concerns.”

The bill “doesn’t have any legs,” he told OCCRP by phone.

Beasley, elected to the Senate in 1998, served on the General Fund Committee with Albritton, who was its chairman. He said Alabama has a long history of strict ethics law, passing “punitive” amendments to its ethics code in 2010.

“We all learn right from wrong,” Beasley said.

Local political commentators, however, are slow to call the bill dead.

Alabama had the 41st worst economy in the nation according to a 2017 analysis conducted by WalletHub, a personal finance website, and lawmakers are eager to create opportunities for big businesses in the state.

“We’ve had extremely good success” in recruiting industry to Alabama over the years, Beasley said. Mercedes came in 1994, the first automobile manufacturer to set up shop. Hyundai arrived in Montgomery in 2002, and there are Airbus and Honda manufacturing sites in Mobile and Lincoln, respectively.

And even though one of the bill’s co-sponsors could not name a single contract lost due to state ethics laws, it seems some lawmakers don’t want to take any chances.

Under the proposed legislation, public officials would be legally allowed to receive gifts from lobbyists, as long as those lobbyists report it to Alabama Ethics Commission. The current cap on gifts is US$25.

Additionally, public officials convicted either of bribery involving amounts less than $6,000 or of stealing less than $5,000 from the local or state government would receive a misdemeanor—a slap on the wrist. Furthermore, the bill takes away the investigative and prosecutorial power of ethics crimes away from the State Attorney General and the Ethics Commission and gives it to local district attorneys, who are often overwhelmed by a backlog of cases.

“This bill will encourage corruption, not discourage it,” Alabama Ethics Commission Executive Director Tom Albritton, no relation to Greg Albritton, told the Associated Press in an email. “Allowing the free flow of money to elected officials from those who have official business before them is discouraged in states striving for strong government ethics,” he added.

“The hubris is so high in Montgomery that if it were water we’d all be dead,” a columnist for the Alabama Media Group wrote in a scathing condemnation of Albritton’s legislation.

Early last month, the Alabama House of Representatives approved a safe harbor law for economic developers coming to the state, exempting them from rules governing lobbyists. Democrats who opposed the bill called it a “get out of jail free card” for lawmakers.

Tom Albritton, the head of the Ethics Commission, called it simply a “bad bill.”

“You know we’ve had a history through the years, we’ve had people convicted of selling their vote,” said Rep. Mary Moore, a Democrat from Birmingham, according to the AP. “They’ve been doing a lot of economic development and getting wealthy too. People are getting extremely wealthy off of packages in this house.”