A diplomatic brawl erupted between Slovenia and Hungary after a Slovenian magazine published an unflattering caricature of Viktor Orban, prompting Budapest to ask Ljubljana to discipline its journalists. 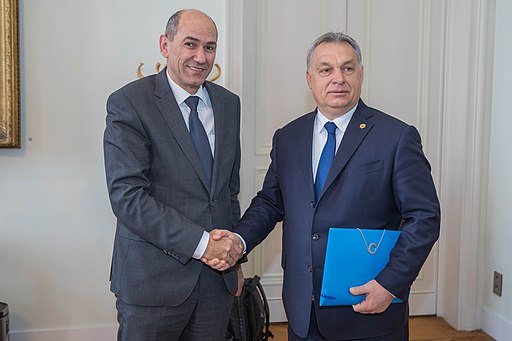 Mladina’s “politically irresponsible” cover was violating the principles of freedom of the press and freedom of expression,” the Ambassador said, asking the Slovenian Foreign Ministry for assistance in “preventing similar incidents in the future”.

Slovenia’s Foreign Ministry responded by saying that it “respects the principles of media freedom and freedom of expression and never interferes in the editorial policy of Slovenian media”.

In the disputed edition from March 22, Mladina published an article about how efforts to expel Orbán's Fidesz from the European People's Party failed thanks to the party’s Slovenian members. The cover of the edition showed three Slovenian politicians helping Viktor Orbán stand straight while saluting.

Ambassador Bátorfi sent a separate letter to Mladina, accusing it of crossing the line by depicting Orbán this way.

Mladina’s editorial board was baffled by the letter and especially by its language which reminded them “of a different time, thus revealing the nature of the Hungarian authorities and the Ambassador herself,” wrote editor-in-chief Grega Repovž in an op-ed, titled “Slovenia’s sovereignty is threatened.”

The Association of Slovenian Journalists also denounced the Hungarian Ambassador’s note as unacceptable and called it an example of how the government of an officially democratic country, an EU and NATO member, sees the role of the media in society.

“Over the last decade, the Hungarian government has systematically violated all principles of media freedom,” the statement fired back.

Even the caricaturist himself, Tomaž Lavrič, responded to the Ambassador’s letter with a satirical apology in which he urged her “to continue to help us with good advice and benevolent criticism, so that we also achieve the exemplary state of objectivity and unanimity that you have established in the Hungarian media.”

He also redacted the disputed caricature, changing the color of the Hungarian flag in it into the colors of the LGBT community which is under threat in Hungary.

In the meantime, the brawl went international. Mladina received letters of support from foreign media and also members of the European Parliament, as well as criticism.

The spokesman of the Hungarian government Zoltán Kovács said the cover is yet another unfortunate example of the intolerance of today’s Left. “Anyone who stands athwart their liberal ideology, questioning their multiculti orthodoxy, will be denounced as an extremist.”

The Mladina weekly regularly reports on Hungarian government’s relations with Slovenia, especially about the close political relationship between Orbán and the leader of Slovenia’s conservative party SDS Janez Janša.

In recent years businessmen close to Orbán have invested heavily into Slovenian media that was controlled by Janša’s SDS or its satellites, for example Slovenia’s “Fox News” NOVA24TV.si.

Mladina is a left-leaning political weekly with a long history of causing uproar. It’s role was most pronounced during Slovenia’s drive for independence from Yugoslavia when its editions were confiscated by the communist government, and its editor and journalists – oddly among which was SDS’s strongman Janša – were jailed by the Yugoslav army for their reporting.