Vietnamese customs has seized over nine tonnes of ivory found in a container shipment from the Republic of Congo, thought to be the largest ivory seizure in recorded history. 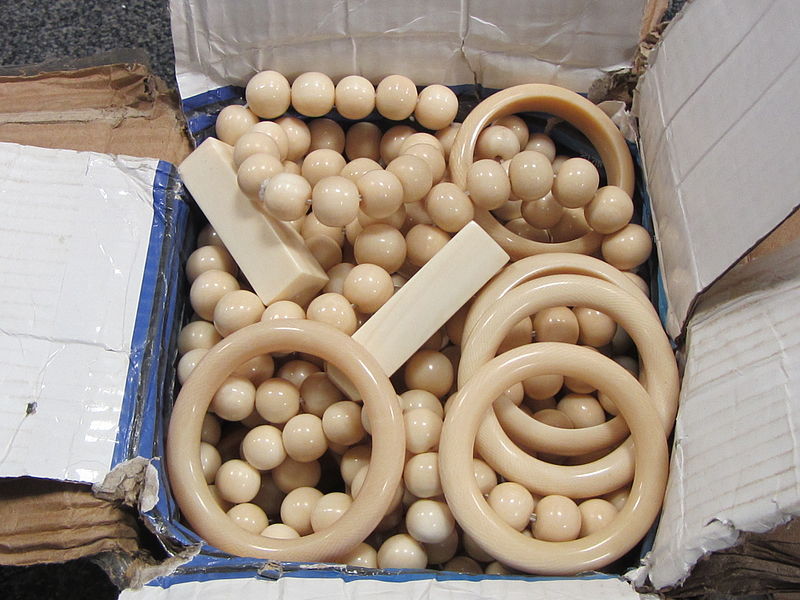 Ivory goods intercepted at Heathrow Airport in 2012, en route to importers in Hong Kong and China from Nigeria. (Photo: Wikipedia, UK Home Office, CC BY 2.0)Officials in the coastal city of Da Nang discovered the illicit goods during an inspection of a container of timber originating in the Congo, the Environmental Investigation Agency (EIA), a UK-based NGO, said Thursday in a press release.

Nine tonnes of ivory tusks is equivalent to over 1,000 slaughtered elephants.

All African elephants with the exception of a few populations are included in Appendix I of the Convention on International Trade in Endangered Species of Wild Fauna and Flora (CITES), a multilateral treaty in effect since 1975. Commercial international trade in Appendix I species taken from the wild is prohibited.

“While we welcome today’s ivory seizure in Vietnam, we would emphasise that without follow-up efforts resulting in prosecutions and appropriate penalties, seizures alone are no deterrent to the criminals involved in wildlife trafficking,” Mary Rice, EIA’s Executive Director, said.

EIA has been investigating the illegal wildlife trade in Vietnam for some time now, documenting how the country has fast become a transit hub for ivory and other goods travelling from the continent of Africa to elsewhere in Asia, especially China, where it is used in ornaments, jewelry and traditional medicine.

China announced a ban on all trade in ivory that went into effect at the end of 2017. But while a fall 2018 survey seemed to suggest that demand for ivory was easing up, more recent research suggests that the illegal ivory trade is still going strong in trafficking hotspots, like at the China-Vietnam border.

EIA authored a report last year on the Vietnamese ivory trade, “Exposing the Hydra,” the product of a two-year investigation in which researchers posed as wildlife traders in order to infiltrate the various levels of ivory trafficking syndicates.

The report found that Vietnam has grown to be a powerful figure in the global illegal ivory trade in the past decade, partnering with major organized crime groups operating in Mozambique, South Africa and elsewhere on the continent to traffic goods into and through Vietnam.

Between 2009 and 2018, when the report was published, 56 tonnes of ivory were seized in Vietnam and an additional 20 tonnes with links to Vietnam were confiscated in other countries, the equivalent of ivory from some 11,414 elephants. The traffickers EIA followed sold ivory for between US$150 and $400 per kilogram. At those prices, the nine tonnes seized this week would fetch between $1.35 and $4.05 million.

Vietnam may have made some large seizures in the past few years, but enforcement and prosecution remain weak, according to EIA.

This does not bode well for the African elephant.

In the early 20th century there may have been as many as 3 to 5 million African elephants roaming the continent, but conservationists estimate there are now only around 415,000 left.