A prominent Venezuelan journalist who had been reporting on the country’s political crisis was released from detention by authorities late Tuesday after spending over 24 hours in lockup. 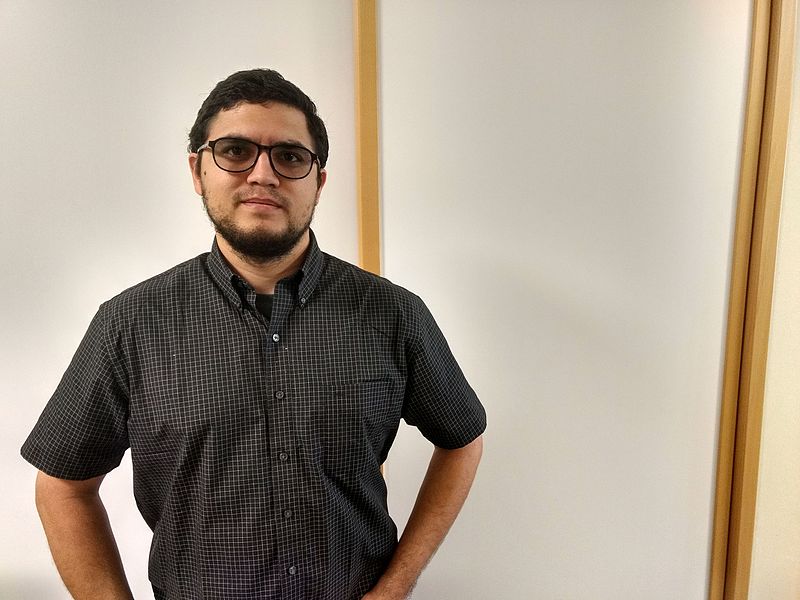 Luis Carlos Diaz (Photo: Wikipedia, Francesc Fort, CC BY-SA 4.0)Luis Carlos Diaz, 34 became on Monday one of dozens of journalists who have been illegally detained and questioned by Venezuelan authorities since the beginning of the year.

According to Transparencia Venezuela, the local chapter of Transparency International, Diaz was “subjected to cruel and degrading treatment by the Bolivarian National Intelligence Service (SEBIN).”

The national press workers union (SNTP) confirmed his release in a tweet at roughly midnight on Tuesday.

The journalist was charged with “instigating crimes” and ordered to report to intelligence authorities every eight days. He is also forbidden to leave the country or speak about his experience in detention, according to local media.

Diaz works for Union Radio News in Caracas and also produces digital radio and video programs with his wife, political commentator Naky Soto, according to the Madrid-based El Pais.

Numerous human rights and media advocacy organizations spoke out against Diaz’s detention, including the UN Human Rights Office, the Committee to Protect Journalists, and Human Rights Watch, and supporters demanded his release using #DóndeEstáLuisCarlos or #WhereIsLuisCarlos.

Soto reported her husband missing on Twitter, writing that she had lost contact with Diaz Monday at 5:30pm, when he told her he was coming home from work. She said he was traveling home by bicycle, but “from 5:30pm I do not know anything about him and: he is not at the station, he is not at home, he has not tweeted, he does not answer calls, he does not answer SMS or messages on WhatsApp.”

Nine hours after his disappearance, at 2:30am, four patrols and some 15 officials raided the residence of Diaz and Soto, reported investigative reporter Luz Mely Reyes, who was present at the scene. While Reyes was reporting the raid on social media, intelligence officials confiscated her phone, according to Transparencia Venezuela.

During the early hours of Tuesday morning, Diaz told Soto over the phone he had been detained near the Korean embassy while riding his bicycle home. He also said he was beaten during his detention. Officials said during the raid that Diaz had allegedly committed “computer-related crimes.”

On Tuesday morning Soto mobilized a group of dozens of supporters outside the gates of the Office of the Attorney General in Caracas to demand her husband’s freedom.

Since the start of 2019, 40 Venezuelan journalists and press staff have been illegally detained and questioned in isolation, according to SNTP.

Last Friday, the Twitter account of a television show, Con El Mazo Dando, directed by the right-hand man of disputed president Nicolas Maduro, Diosdado Cabello, released a video that accused Diaz, a “fascist influencer,” of causing the country’s massive blackout. The blackout began last Thursday and is affecting 18 out of 23 states, the Guardian reports.

In a televised nationwide address on Monday night, President Maduro accused US President Donald Trump of orchestrating a “demonic” plot to remove him from power by paralyzing the electricity system by means of an “electromagnetic attack,” according to the Guardian. US Secretary of State Mike Pompeo followed by announcing on Twitter that the US would vacate its embassy in Caracas.

After his release, Diaz tweeted from his wife’s account to express thanks to his supporters.

“It is incredible. I've been reading for hours and I haven't finished. Thank you,” the journalist wrote.