Several hundred journalists marched in the Croatian capital of Zagreb on Saturday in protest of the misuse of lawsuits against journalists as a means to pressure and censor them, the Croatian Journalists’ Association (HND) said on Monday. 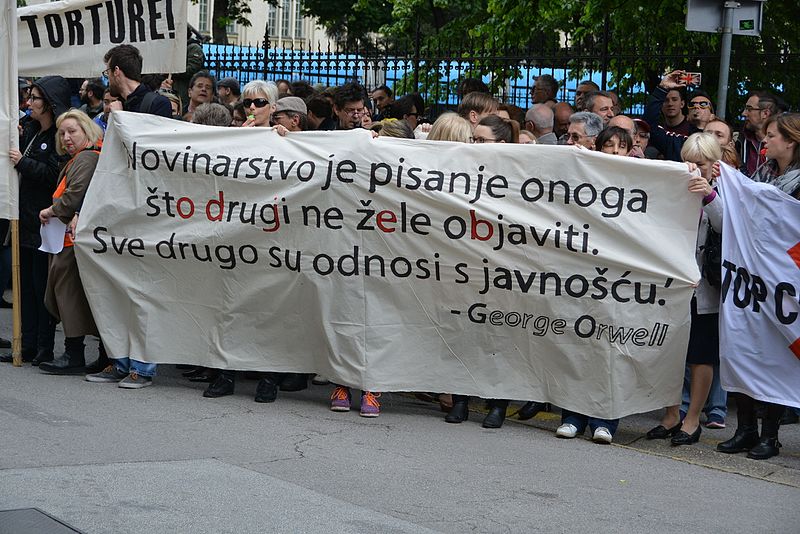 "Journalism is printing what someone else does not want printed: everything else is public relations." -- George Orwell. Freedom of the press protests in Zagreb, 2016 (Photo: Branko Radovanović, CC BY-SA 4.0)In response to the 1,160 court proceedings that are currently being mounted against Croatia’s journalists and media outlets, HND – which has over 3,000 members – took to the streets to protest “the state of the profession.” For crimes “against honor and reputation,” Croatian journalists can be sued even for the publication of accurate and true information.

The HND protesters accused Prime Minister Andrej Plenkovic of not sparing “even 30 seconds to hear their problems” within the last three years. Journalists marched to the Ministry of Culture, which is responsible for the media sector, and other government buildings to submit a document entitled “Eight demands against censorship”.

Their demands include that the government urgently amend legislation to prevent the misuse of the law as a means to intimidate journalists, according to a statement posted on the association’s web-page on Monday.

HND’s demands also include: the abolition of legislation which prohibits journalists from speaking without the consent of superiors; the depoliticization of the Electronic Media Council so that it functions as an independent regulator; prosecution of those who attack journalists, as the HND has recorded 18 reports of physical assault and 50 serious threats to colleagues for doing their job since since 2014, as well as the introduction of public support for quality journalism.

The protesters demanded the resignation of the HRT leadership “due to its promotion of defeated ideologies, suspicious spending of public money and the persecution of journalists and media.”

Further, they asked that the HRT Act be amended to free the broadcaster from political and corporate influence so that it no longer serves “the ruling party, but all the citizens who fund its work.”

The leader of the opposition party, Davor Bernardic, joined the protest and confirmed his support of the criticism of HRT according to N1.

According to HND, an international mission of media organizations including the European Federation of Journalists, the European Broadcasting Union and the Balkan and Caucasus Monitoring Mission will visit Croatia for the third time on March 6, in response to the worrying situation.