Andreas Neocleous, the founder of a Cypriot law firm which was found guilty of bribing a former deputy attorney general, acquired a stake in the Cyprus Mail, one of the few remaining independent media on the island. Almost immediately, the paper deleted its coverage of the bribery conviction from its website. 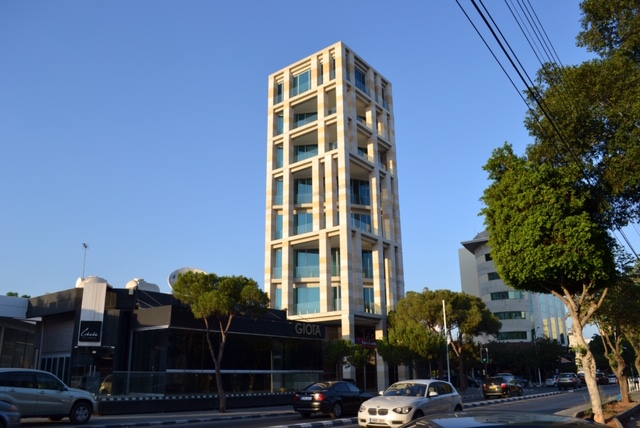 The Neocleous House, Limassol, Cyprus (Photo by OCCRP) “We are happy to inform you that we have secured a major investment in the company which we are certain will help its growth and expansion,” the staff were told by one of the newspaper’s directors.

“This was made possible after an agreement with leading Limassol lawyer Mr Andreas Neocleous, who saw the potential for growth of the Cyprus Mail operation. Mr Neocleous will be visiting our premises in the coming days to meet everyone,” the staff of the English language newspaper was told. The email also said that the acquisition will not affect employment.

Neocleous did not immediately respond to OCCRP’s request for comment.

The lawyer founded Andreas Neocleous & Co LLC, a firm that included among its clientele the Russian billionaire Dmitry Rybolovlev, who was charged with bribery in Monaco. Rybolovlev was once the biggest shareholder of the Bank of Cyprus.

The case rocked the island and caused a rift between Clerides and Cypriot President Nicos Anastasiades, a friend of Neocleous.

In 2017 Neocleous’ son Panagiotis was sentenced to 2.5 years and former deputy attorney Erotokritou to 3.5 years in prison for bribery and 1.5 years for abuse of power. The law firm was fined 70,000 euros (US$79,500). President Anastasiades pardoned Panagiotis Neocleous in 2018.

Neocleous’ law firm had also helped rich foreigners obtain Cypriot citizenship in return for investments. The program is dubbed Golden Visas and is run by several EU countries which offer citizenship or residency to people who invest tens or hundreds of thousands of euros in their economies.

However, after investigating it, EU officials have recommended the program should be phased out as   it “constitutes a serious threat to the security of the European Union” because of the lack of checks and balances, according to Jeppe Kofod, a Danish representative to the European Parliament.

Often the beneficiaries were not properly vetted which allowed them to invest in EU countries money of dubious origin.

The Cyprus Mail was established in 1945 and has claimed to be politically independent. Most of its articles are available online but a simple search on Friday showed that stories about the bribery case involving Neocleous can no longer be found.