Brazil needs to enact wide-ranging reforms in its political and judicial systems and “move beyond purely punitive initiatives” to combat corruption, Transparency International Brasil said over the weekend. 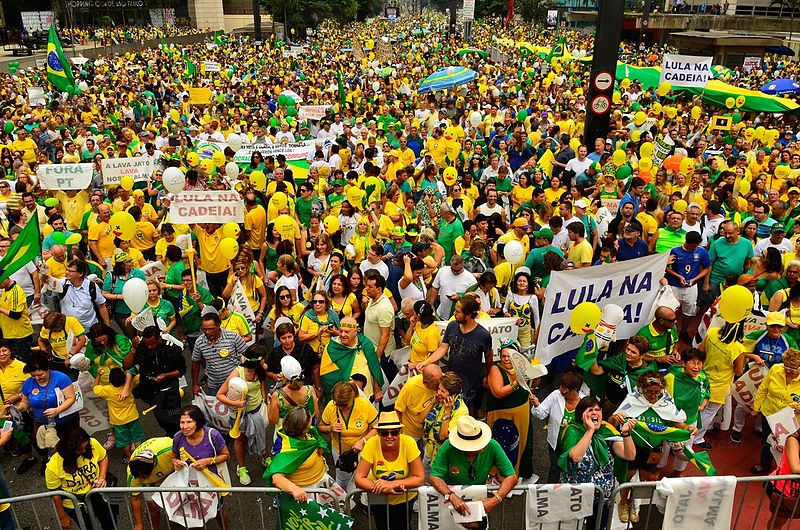 Protests in São Paulo in 2016 against then-president Dilma Rousseff, who was impeached that year. (Photo: Wikipedia, Rovena Rosa, CC BY 3.0 BR)Brazil dropped to its lowest score in seven years on the 2018 Corruption Perceptions Index (CPI). The country earned 35 points out of 100, scoring well below both the global (43) and regional average (44). Brazil, the world’s eighth largest economy according to Forbes was also listed as a “country to watch” in TI’s Americas regional analysis.

Brazil has seen a rise in populism with the recent election of Jair Bolsonaro, a former paratrooper who has praised the military dictatorship that ruled the country for twenty years. The Guardian characterized the new president as a “far-right, pro-gun, pro-torture populist.”

Bolsonaro may have ran on an anti-corruption platform, but many in Brazil as well as in the international human rights community are skeptical that he will have any substantial impact on the fight against graft.

Following his election, international watchdog Human Rights Watch voiced an “urgent call” that “Brazil’s judiciary and other key institutions should resist any attempt to undermine human rights, the rule of law, and democracy under Jair Bolsonaro’s government.”

However, Brazil’s new low CPI score may reflect an inherent paradox of the index, TI notes. As fighting corruption becomes a priority for a government and more scandals are uncovered, perceptions of corruption may actually increase rather than diminish.

Still, TI says Brazil could have been doing more in recent years. President Temer, for example, used the word “corruption” in only two out of 349 speeches he gave during his two years in office. Meanwhile, 65 percent of respondents to a 2016 survey named corruption as a principal problem in the country, more than named drugs or violence.

And while unearthing scandals and sending criminals to justice may win Brazil accolades in the short term, quick fixes will not solve endemic problems. Brazil needs to implement medium and long-term reforms that “demonstrate the country’s serious commitment to eliminating the structural causes of corruption,” TI writes.

The “New Measures against Corruption” lays out 70 legislative and regulatory proposals to address the structures and systems that allow corruption to breed.

Brazil is not a doomed nation, TI writes. A growing economic and political influence both in the region and the world, the country is perfectly poised to take a positive step towards transparency, accountability and the rule of law.