Cambodia has been placed on the Financial Action Task Force’s (FATF) anti-money laundering and terrorism financing watch-list, the inter-governmental body announced on Friday. 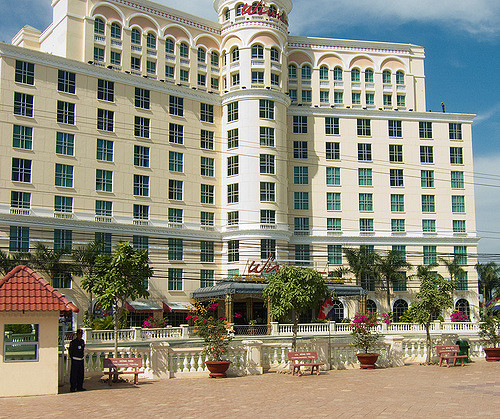 "Winn" Casino on the Cambodia/Vietnam border (Photo: Charles Haynes)One of the reasons the country ended up on the list is the growing number of casinos, which are seen as a high-risk target for money laundering.

Though it has become a “monitored jurisdiction,” avoiding the urgent, red-light category occupied only by Iran and North Korea, the FATF identified strategic deficiencies in Cambodia’s ability to combat money-laundering and terrorism financing.

In a notice summarizing the FATF’s plenary held in Paris for two days last week, the group announced that it has developed an “action plan” along with Cambodia to address it’s “most serious deficiencies.”

FATF is an inter-governmental policy-making body setting the standards for the effective implementation of “legal, regulatory and operational measures for combating money laundering, terrorist financing and other related threats to the integrity of the international financial system.”

It also works towards garnering the necessary political will to bring about reforms in the financial sector and claims Cambodia has offered a “high level (of) political commitment” to its action plan.

Cambodia’s inclusion on the watch-list comes in the wake of the body’s September 2018 evaluation report, which found a number of weakness in Cambodia’s financial environment.

The country has not applied a broad risk-based approach to the allocation of resources towards financial oversight, nor has it developed a national policy informed by money laundering and terrorism financing risks.

Further, there are shortcomings in its ability to implement financial sanctions, such as weak freezing measures, as well as to impose dissuasive and proportionate fines, market entry requirements.

According to the trade publication Calvin Ayre, there are “more than 100 brick and mortar operators” taking advantage of the country’s lax regulations, but the country has shown some effort in improving oversight of this sector, such as increasing taxes.

Earlier this month, the EU launched a process which could result in temporary suspension of Cambodia's access to the EU market under the Everything But Arms (EBA) trade scheme, citing the country’s human rights violations as the reason.

The EBA scheme allows beneficiaries outside the EU to sell certain good to the EU tariff-free in order to “give a huge boost to their economies.”

The launch of the process includes “a period of intensive monitoring and engagement” before the removal of access is considered.

High Representative for Foreign Affairs and Vice President of the European Commission Federica Mogherini at the time said that "over the last eighteen months, we have seen the deterioration of democracy, respect for human rights and the rule of law in Cambodia.”