For the third time this month, Montenegrins took to the streets on Saturday demanding an end to the 30 year long rule of their president as well as an end to rampant corruption in the country. Organizers of the ‘97,000 Resist’ movement told OCCRP on Monday that the mass protests were triggered by the so-called “Envelope Affair.” 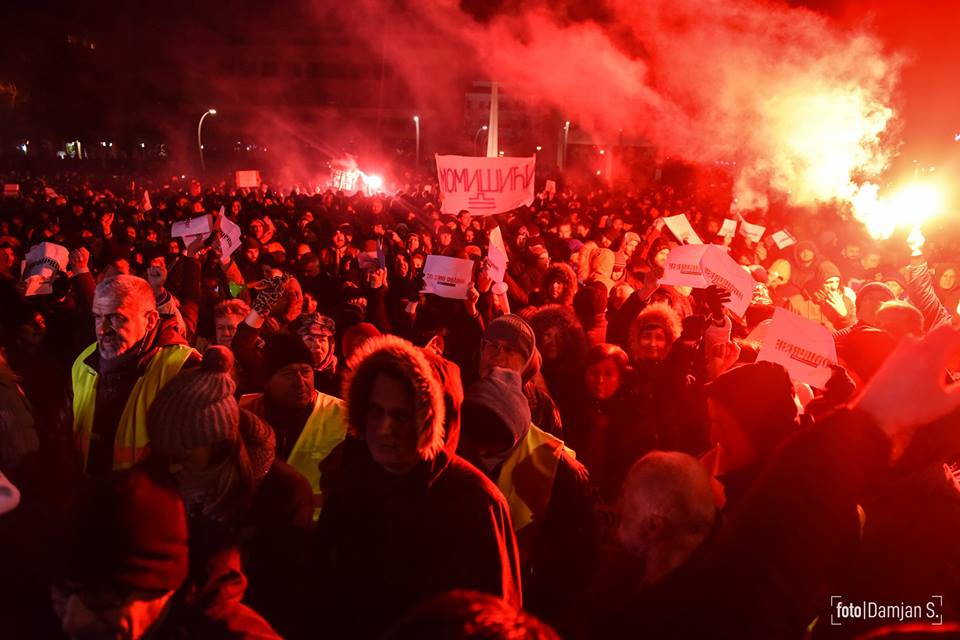 Protesters gather at Trg Nezavisnosti (Photo: Damjan Spasojević)Protesters’ demands, according to the movement’s Facebook page, include the resignation of President Milo Djukanovic, as well as that of Prime Minister Dusko Markovic, Supreme State Prosecutor Ivica Stankovic, and the director of the corruption prevention agency.

Speaking to OCCRP, Ilija Gajevic, one of the organizers of the movement explained that the Envelope Affair erupted after a video was released in January of a government official receiving 97,500 euros (US $110, 808) from Montenegrin businessman Dusko Knezevic in 2016 in an envelope which, it is clearly heard in the audio, is intended to fund an election campaign relying on the purchase of votes.

The footage finally offered visible evidence of corruption which has been suspected for years. ‘97, 000 Resist’ says however, that the ‘Envelope Affair’ shows an instance of “only one in the sea of affairs of illegal financing and the rigging of elections which the current government has been involved in for 30 years.”

A former key ally of the President, Knezevic has also released evidence which he claims proves he has been providing secret cash to the ruling party for the past 25 years during which time they have never been out of power. President Djukanovic has denied the allegations, and claims the party reported all campaign funds. Knezevic is rumored to be hiding out in London, after authorities accused him of money laundering.

According to Gajevic, the country’s Anti-Corruption Agency found only that the ruling party, the Democratic Party of Socialists, did not report 47.500 euros (US$53,874) from the pre-election campaign. The agency, organizers of the movement claim, refuses to investigate the results of the election itself or what happened to the remaining 50,000 euros from the envelope.

The organization also accuses senior law officials of ignoring evidence and not prosecuting manifest corruption in the ranks of Djukanovic’s inner circle.

Despite bad weather, with strong winds of up to 100 km/hr, the amount of people who took to the streets of the capital Podgorica greatly exceeded expectations. Almost 10,000 people turned up on Saturday, a huge portion for Montenegro’s population of about 610,000.

The movement has grown since the first rally where organizers had expected only 100 people, but 1,000 turned up. Several thousand then joined in during the second rally.

On Saturday, protesters gathered in front of Radio Televizija Crne Gore, the studio of the state broadcaster which they claim is the mouthpiece of the government. They intended to make enough noise to interrupt the channel's main daily news program.

Protesters have also gathered at the Prosecutor’s Office and Freedom Street, leaving envelopes on which they had written the names of other corruption affairs in Montenegro over the last 30 years.

“‘Zavala’, ‘Tobacco affair’, privatization of KAP and many others that top officials from the Democratic Party of Socialists were involved in,” said Gajević. “Some are still in government positions, while others avoid prison sentences through delayed judgements,” he added.

The state broadcaster claims that the movement is a stunt organized by the opposition but Gajevic said the protests are being organized by a group of “free citizens” without interference from any politically affiliated groups.