OCCRP’s Bulgarian partner Bivol has identified a Bulgarian lawyer as the owner of a bank account allegedly used to launder hundreds of millions of dirty dollars on behalf of Venezuelan leader Nicolas Maduro. 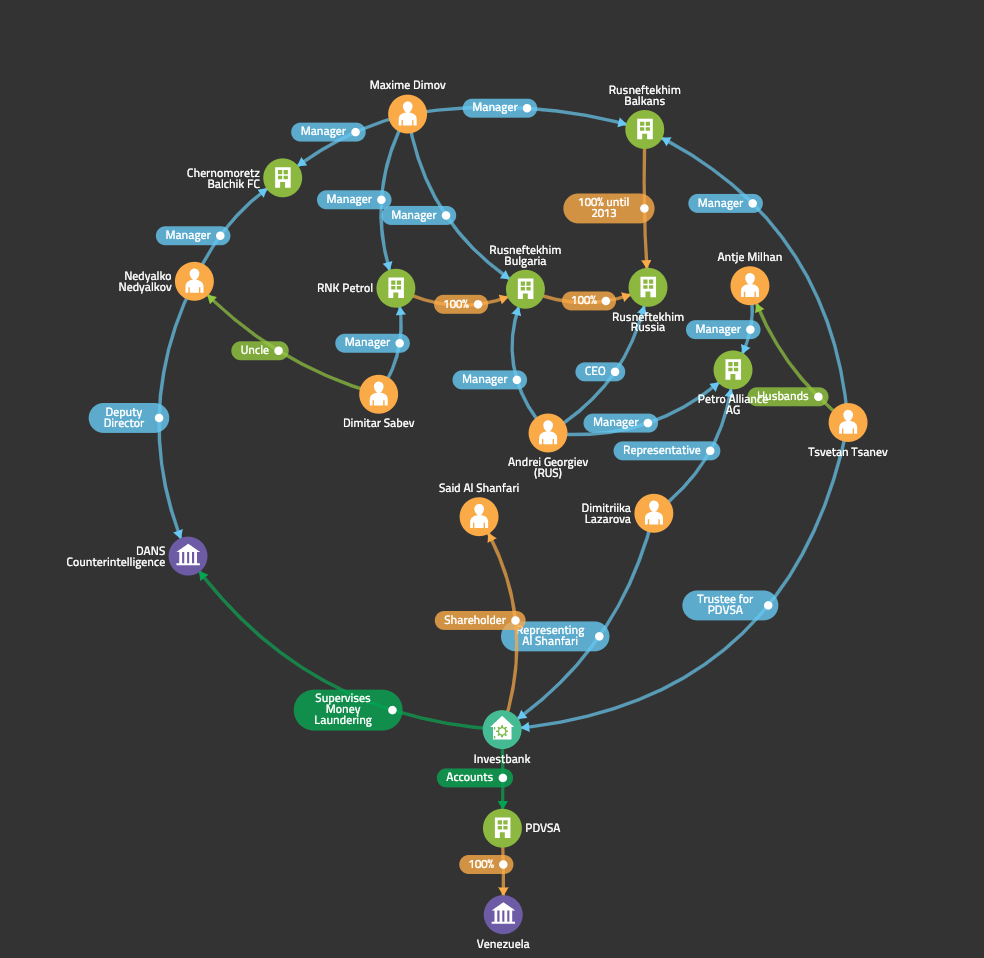 A diagram showing an alleged money laundering network that includes Tzanev. (Photo: Bivol)The lawyer, Tzvetan Tzanev, was also a figure in a 2015 investigation conducted by the Investigative Reporting Project Italy (IRPI) and Bivol into the Cosa Nostra’s hand in the Zimbabwean blood diamond trade.

Bulgaria’s Prosecutor General, Sotir Tsatsarov, announced Wednesday that U.S. authorities found that Bulgarian bank accounts were used to transfer money from Venezuela. The transfers were made in particular by Petroleos de Venezuela, S.A., the state-owned oil and natural gas company.

Tsatsarov did not name the bank or the accounts’ owner, but Bivol confirmed the accounts belong to Tzanev through two independent sources from Bulgaria and abroad.

Tzanev was additionally identified in another Bivol investigation concerning a raid allegedly orchestrated by Cosa Nostra of a Libyan tanker docked in the Burgas Bay off Bulgaria’s Black Sea coast.

In December of last year, a group of 30 armed men stormed the tanker and “threatened, cursed, bea[t] and forcibly removed” the Libyan captain, his deputies and the sailors. The entire crew was deported from Bulgaria. Bivol’s investigation suggests that “instead of thwarting the mafia raid, the Bulgarian State, represented by its institutions, has actually helped to hijack the ship…”

Former U.S. Ambassador to Bulgaria John Beyrle described Investbank, where Tsanev opened the account, in a classified diplomatic cable from 2006 leaked to WikiLeaks as a “bad apple” bank, or a bank “whose practices are repeatedly cited as questionable or shady, funneling money for known criminals in money laundering schemes and involved in connected lending.”

Tzanev is already a well-known figure in Bulgaria. Evidence points to his involvement in drug trafficking through the Italian port city of Bari during his youth, Bivol says.

Tzanev was among the 21 defendants—including politicians, state company directors and state security agents—in a 1991 amphetamine case launched by the Prosecutor General’s Office. The case was later closed due to state interests, but prosecutors claimed at the time that US$1 billion had been taken out of the country per month through so-called “hidden transit.”

Tzanev later earned the distinction of a “credit millionaire” who received a loan of $201.5 million from Mineralbank in 1992 which he never repaid.