Estonian parliament again shelved the draft of a law that was to strengthen the rules on money-laundering, saying the bill will be discussed again after election in March, the Estonian Committee on Legal Affairs said on Thursday. 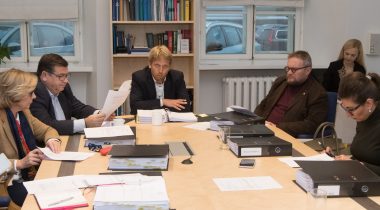 In late 2018, Prime Minister Jüri Ratas said that Estonia had to learn from the Danske scandal" in order to be successful in combating money laundering, we must have both functioning rules as well as compliance and sufficient oversight."

Ratas commissioned a report on the relevant legal framework and institutional capacities for reforming the financial sector, which included a set of proposals regarding how to further strengthen Estonia's anti-money laundering capabilities.

The Anti-Money Laundering Government Committee comprised relevant government officials, financial regulators, as well as representatives from the the Bank of Estonia.

After declaring the proposed law too vague in January, the Legal Affairs Committee now says the it still needs “a more in-depth impact analysis and, as it stands, the final composition of the Parliament cannot proceed with the urgent procedure.”

According to the head of the parliament's Legal Affairs Committee Jaanus Karilaid “interest groups need additional time for discussions and it is reasonable to come back to the next (Estonian parliament) next spring in order to process amendments to the law.”

Though he said that the fight against money laundering remains a priority, he deemed it, nevertheless, “irresponsible to hurry up the barge as a law that could damage our business environment and violate the fundamental rights of individuals.”

“The current parliament will not discuss this topic further,” a spokesperson also told RFE on Wednesday.

It is this latter provision which is under scrutiny, having been criticised by Estonia’s legal ombudsman as violating the principle of innocent until proven guilty.

OCCRP named Danske Bank its 2018 Corrupt Actor of the Year, allowing billions of dollars to flow to offshore companies from corrupt regimes and illegal activities.

The Estonian supervisory authority (EFSA) rejects Denmark’s allegations that it is responsible for the lack of oversight, claiming it is “somewhat astonished by the firm assertion of Danish financial supervision.” It says it was crucial in ending the illegal activity, after it deemed that “Danish supervision is not working.”