Azerbaijani journalist Khadija Ismayilova ended her five-day hunger strike on Saturday after thousands of protesters rallied to demand the release of political prisoners from Azerbaijan’s prisons. 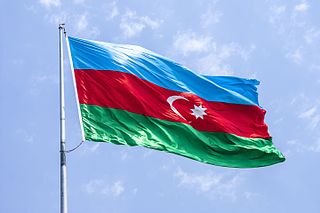 The national flag of Azerbaijan (Photo: AlixSaz, CC BY-SA 4.0)“Society is awake and their voice is louder than our hunger,” said Ismayilova. Since 2013, the reporter has been detained several times, accused of treason, smeared by government-friendly media, accused of tax evasion and theft and eventually arrested and sentenced to 7.5 years in prison based on fabricated charges of embezzlement, illegal business, and abuse of power.

She was released in 2016 after serving 18 months in prison. The European Court of Human Rights recently ruled in favor of Ismayilova that the Azerbaijani government had violated freedom of expression laws.

The rally was held in the country’s capital of Baku on Saturday to demand the release of anti-corruption blogger Mehman Huseynov, as well as other inmates considered political prisoners.

Despite Azerbaijani authorities detaining dozens prior to the rally, falsified weather forecasts being published on government sites, and universities scheduling exams for rally day, activists estimated that around 25,000 attended the rally while local police say it is closer to 2,800 people.

On Thursday, the European Parliament called for the unconditional release of Huseynov, as well as “all political prisoners, including journalists, human rights defenders and other civil society activists.” The resolution asks Azerbaijan “to fully guarantee freedom of the press and media, both in legislation and in practice, both online and offline, to guarantee freedom of expression in line with international standards.”

Huseynov started his hunger strike to protest additional charges filed against him just as his release date was approaching. He was originally arrested in March 2017 on libel charges after blogging about President Ilham Aliyev and the Aliyev family. The new charges, alleging he assaulted a guard, could mean another seven years in jail.

Huseynov on Monday sent an appeal to President Aliyev, denying the new allegations.

Four prisoners who also joined Huseynov in the hunger strike – Ilkin Rustamzade, Bayram Mammadov, Elchin Ismayilli and Ahsan Nuruzade – are being denied medical care, according to Ismayilova, and being threatened in attempts to stop the strike.

Ismayilova said activists will continue to report on arrests and detentions, monitoring the treatment of detainees and helping them find legal aid. She voiced hopes that the prisoners would also stop the hunger strike and allow “society to fight for them with louder methods.”

On her Facebook page, she said that political prisoner Ahsan Nuruzade had been transferred from prison to an unknown location on Saturday, in apparent punishment for his participation in the hunger strike.

The information is difficult to verify however, but, according to Ismayilova, Nuruzade hasn’t called his family this week. “It is not clear if he is still alive,” she said.