Tiffany Will Now Disclose The Origin Of Diamonds

American luxury jewelry retailer Tiffany announced Wednesday that it will begin disclosing the origins of its diamonds as part of an unprecedented transparency initiative in the traditionally opaque industry. 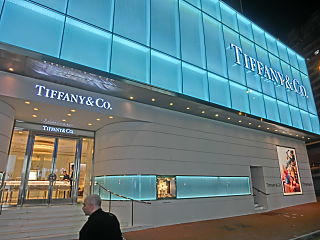 A Tiffany storefront in Hong Kong. (Photo: Macekhanshumk, CC BY-SA 3.0)In a move praised by human rights groups, Tiffany will now provide the country or region of provenance for individually registered diamonds that are 0.18 carats and larger in an effort to assure customers their jewels are responsibly sourced.

By 2020, the company says customers will be able to trace their gem’s movements even further through the supply chain to where it was cut, polished, and set.

In cases where provenance is unknown, such as with stones that predate the policy, Tiffany says it will provide confirmation the diamond was sourced with practices that surpass minimum industry requirements.

In 2003, the United Nations established the Kimberley Process, a trade regime meant to clean the market of so-called “blood diamonds.” Under its certification scheme, member states are required to implement safeguards on shipments of rough diamonds (those that haven’t been cut and polished) and certify them as “conflict free."

While KP members account for approximately 99.8 percent of the global production of rough diamonds, critics say its definition of conflict diamonds—"rough diamonds used to finance wars against governments”—is too narrow and rigid to address the full range of risks the industry poses to human rights.

Due to such concerns, the international NGO Global Witness resigned as an official observer of the agreement in 2011. “The Kimberley Process’s refusal to evolve and address the clear links between diamonds, violence and tyranny has rendered it increasingly outdated,” the group said in a statement.

More than just war, diamonds may be tainted by abuses ranging from slavery and displacement to environmental harm, Jo Becker, advocacy director for Human Rights Watch, said in a statement praising Tiffany’s initiative.

Rough diamonds from Zimbabwe and Angola are accepted under KP standards, for example, even though the diamond trade in Zimbabwe is linked to torture and forced relocation, and to child labor and slavery in Angola.

“Transparency is the first step to improve human rights in a supply chain,” Becker said. “Tiffany’s announcement is another step forward, and we encourage others, particularly diamond mining companies, to provide their clients with information on the origins of the diamonds they sell.”