A former state attorney general from Mexico is facing life in prison for using his position as a top law enforcement official to facilitate drug trafficking into the United States in exchange for bribes, the US Attorney for the Eastern District of New York announced last week. 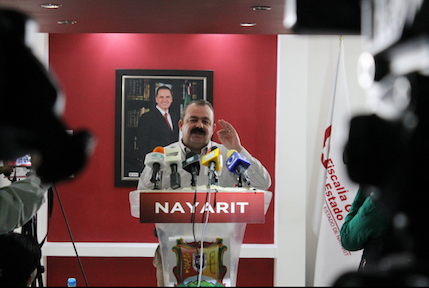 Edgar Veytia (Photo: Twitter of Attorney General of the State of Nayarit)Edgar Veytia, the former attorney general for the state of Nayarit, pleaded guilty on Friday to an international conspiracy to manufacture and import heroin, cocaine, methamphetamine, and marijuana from Mexico into the US.

According to court documents, the scheme dated from the beginning of Veytia’s tenure as Nayarit’s top law enforcement officer in January 2013 to the time of his arrest in February 2017.

As the state attorney general, Veytia was the chief officer in charge of law enforcement authorities in Nayarit, but exploited his official position to assist and abet drug trafficking organizations operating in the western Mexican state.

Prosecutors say Veytia took bribes to protect the distribution of drugs into the US and obstruct legitimate investigations into traffickers by preventing their arrests and by unlawfully releasing those who had been arrested by Mexican authorities.

According to his indictment, Veytia was responsible for the manufacture and import of at least one kilogram of heroin, five kilograms of cocaine, 500 grams of methamphetamine, and 1,000 grams of marijuana into the US.

During his run for attorney general, Veytia promoted himself as a law-and-order candidate.

"Nayarit is not fertile ground for lawbreaking," he once said, according to the Associated Press. "Here, there is no room for organized crime."

Veytia faces at least ten years in prison at his sentencing later this year, but could receive a life term if the judge follows the guidelines calculated by prosecutors. Under forfeiture laws, the US government could also seize some US$250 million.