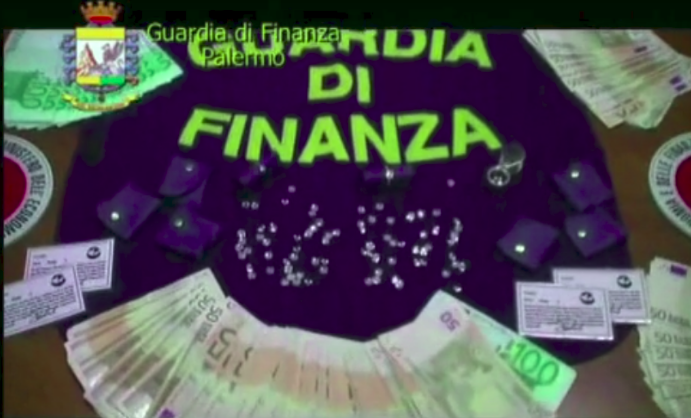 Jewelry and cash found by Palermo's tax police (From: Guardia di Finanza)The industrial network targeted by the seizures dates back to the 1980’s, when Ezio Ruggero Maria Brancato — a former Sicily government official who died in 2000 — created the foundations for Sicily’s gas industry.

Brancato and his heirs worked together with two well-known Cosa Nostra figures from Corleone, Vito Ciancimino and Bernardo “The Tractor” Provenzano, to create a gas industry network, according to a Tax Police press release.

The Sicilian entrepreneur was a shareholder in six companies belonging to the Palermo-based Gas Group, which investigators say was under control of the Corleone mafia clan. Ciancimino and Provenzano had invested substantial sums into the business.

Ciancimino worked as a liaison between the Gas Group and the mafia clan headed by Riina Salvatore and Provenzano.

“The 'Gas Group,' through sub-contracts awarded to companies close to organized crime, would interact with Cosa Nostra in a 'mutual benefit' relationship, acting as mafia conspirators," police said in a statement.

Brancato’s widow Maria D’Anna and their daughters Monia and Antonella sold their shares in the Gas Group for 46 million euros to Spanish multinational Gas Natural in 2004. The company as a whole was valued at 115 million euros at the time.

With the proceeds of the sale, the Brancato family bought expensive property — including famous historic sites  across Palermo, Sardinia and Spain.

In cooperation with Spanish and Andorra police, authorities seized six companies, 59 properties, four cars, a motorcycle as well as bank accounts and security boxes with jewels and thousands in cash registered to third parties and companies.