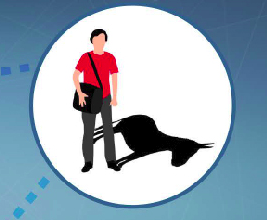 An image depicting money mules from Europol's awareness campaign (Europol)“Across Europe and beyond, 1,504 money mules were identified, leading to the arrest of 168,” a press release stated.

Criminal organizations target the unemployed, new immigrants and people in financial trouble as potential accomplices. Promising easy money, they instruct the mules to transfer funds between accounts, often in different states, in return for a share of the funds.

The mules are, often unwittingly, transferring stolen funds or illicit proceeds between their own accounts.

“This year, cases involving young people selected by money mule recruiters are on the rise, with criminals increasingly targeting financially-distressed students to gain access to their bank accounts,” the press release stated.

While it might only take a few clicks to transfer money between personal accounts, the mules are complicit in severely punishable offences.

“Mules may face lengthy imprisonments and acquire a criminal record that could seriously affect the rest of their lives, such as never being able to secure a mortgage or open a bank account,” the press release said.

In Italy, State Police said they identified 101 mules and “320 fraudulent transactions, for a total of about 34 million euro, of which about 20 million euro were blocked.”

Police across Europe will now start the second phase of the operation focused on prevention and raising awareness.