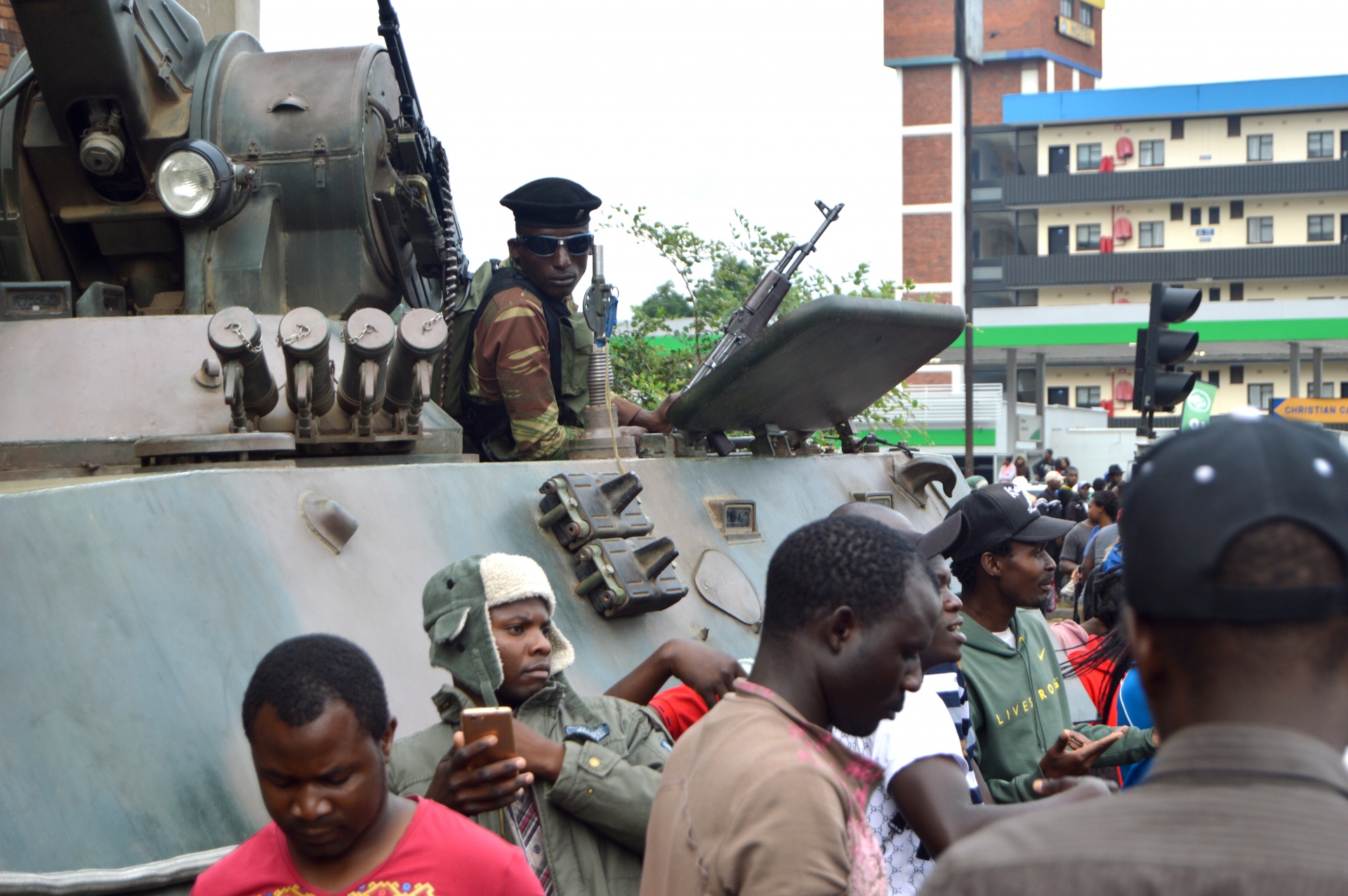 A tank in downtown Harare during the coup in Zimbabwe, November 2017 (Photo: Wikipedia, CC0)Harare magistrate Nyasha Lee Vitorini woke up one morning last week to find his gate locked from the outside with a different lock and a letter threatening him and his family members with death if the magistrate “continued doing what he was doing in court.”

Another magistrate handling corruption-related cases at the Mutare Court, Tendai Mahwe, was tracked as he left work and also received threats.

Acting Police Commissioner General Stephen Mutamba assured judicial officers and other court officials that their safety was a top priority at a training workshop for anti-corruption magistrates last Friday.

“Let us all be aware and let us be brave. Let us work together. If you have got a problem, you can call us anytime and we will react and make sure you are safe,” he said.

“We will be there for you,” Mutamba added.

A full year after military factions organized a coup that overthrew former President Robert Mugabe and allowed his longtime ally, Emmerson Mnangagwa, to take power, Zimbabwe is still struggling to purge itself of corruption and implement democratic reforms.

The new administration appears to making efforts to crack down on graft. Mnangagwa established a Special Anti-Corruption Unit in the Office of the President in May to tackle the issue on the national level, and the Judicial Service Commission has opened up several anti-corruption courts across the country.

Little, however, has changed in Zimbabwe, and the new courts are already plagued by mismanagement and lack of communication.

At the same training workshop last week, Chief Justice Luke Malaba accused magistrates of neglecting their anti-corruption cases, resulting in stays of prosecution and unjustified release of suspects on bail. The magistrates’ lax attitude, he blasted, is “facilitating the laundering of criminals.”

Additionally, poor communication between the Zimbabwe Anti-Corruption Commission (ZACC) and the police’s anti-graft unit has resulted in duplication of investigations and a waste of government resources, a top ZACC official complained last week.

The US re-imposed sanctions on Zimbabwe this July over concerns about human rights abuses, voter intimidation, and other offenses, saying the country must implement concrete reforms before the sanctions, which date back in various forms to 2001, will be lifted.

As of now, Zimbabwe has no “culture of democracy,” according to the US.