In a dynamic week for world-wide police agency Interpol, the organization has accepted two new members, rejected the application of Kosovo and named on Wednesday a new president after the previous one resigned following his arrest in China. 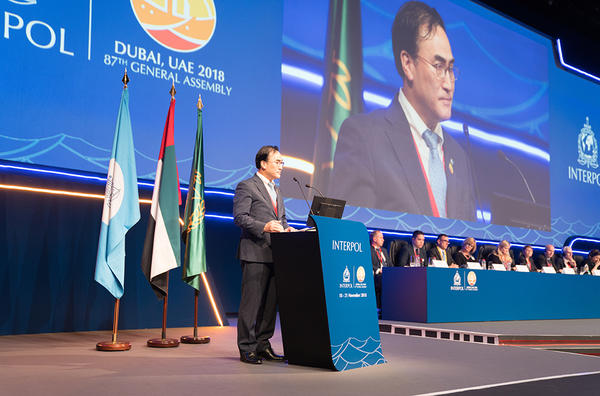 “Our world is now facing unprecedented changes which present huge challenges to public security and safety. To overcome them, we need a clear vision: we need to build a bridge to the future,” said Kim.

Interpol’s Secretary General Jurgen Stock, who oversees the work of the agency’s general assembly, supported the selection of Kim saying, ”Mr Kim has many years’ experience of our governance and I look forward to working with him to give our membership the best possible support in this dynamic and changing global security environment.”

Kim will serve in the role until 2020 because he will be completing the four-year term of his predecessor Meng Hongwei of China.

Meng had gone missing for two weeks earlier this year in China before authorities announced he had been detained and was being investigated over bribery allegations. He resigned shortly after the announcement was made.

The president’s position entails chairing the general assembly of the agency as well as three executive committee meetings every year.

The selection of Kim comes after many experts and critics believed the agency intended to appoint Russian national Alexander Prokopchuk - the highest ranking Russian in the agency.

Kremlin critic Bill Browder, a British-American who has campaigned heavily for countries to sanction Russia on its alleged human rights violations, held a press conference Tuesday condemning the possibility of a Russian Interpol president.

“There is probably no more inappropriate person than this person and there’s no more inappropriate country to have any kind of leadership position at Interpol than Russia,” he said while telling the crowd the Interpol’s regulation bars countries with a record of violations from “using the system.”

The senators accused Russia of abusing Interpol for “settling scores and harassing political opponents, dissidents and journalists.” They add that Prokopchuk has been involved in those abuses.

“If elected as President by the members of Interpol’s General Assembly on Wednesday, we have no doubt that Mr. Prokopchuk will further institutionalize the abuse of Interpol red notices and block ongoing efforts at meaningful reform,” the senators said in the letter.

Lithuania’s parliament made an unprecedented step and voted that should Russia take the Interpol presidency, the county would consider leaving the organization, the Guardian reported.

Besides the presidency, Interpol voted on new member countries this week. On Monday, Kiribati and Vanuatu joined the organization. However, a vote for Kosovo was rejected.

“Voting against Kosovo's accession in this international organization only serves...criminals and no one should rejoice,” the Kosovar government said in response to the vote, according to Radio Free Europe/Radio Liberty.

The country had attempted Interpol membership in 2015 and 2016 as well.

The U.S. Embassy in Prishtina released a statement showing disappointment in the rejection, saying a campaign by its rival Serbia put pressure for states to reject the bid. Kosovo was an autonomous province within Serbia before declaring independence in 2008 after a 1998-99 war between the two. The U.S. as well as many EU countries recognized its independence, yet many countries have yet to.

“The Kosovo Police is a fully integrated and capable institution, with a demonstrated record of helping dismantle international terrorist, cybercriminal, narcotics, arms, and human smuggling networks,” the Pristina statement said.

It continued saying that the support for Kosovo’s Interpol bid was not about its recognition as a sovereign state, but to support global security. “With this outcome, we all lose,” it stated.