A hitman hired by Dublin’s Kinahan cartel was paid €130,000 (US$148,161) to murder members of the rivaling Hutch gang, with which the Kinahans have been at war since 2015, the Irish Sun reported Monday. 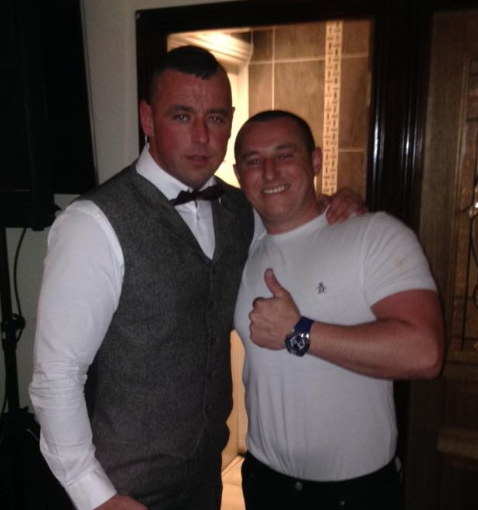 Jonathan Keogh and Thomas Fox (From: Facebook)After Jonathan Keogh, his sister Regina and accomplice Thomas Fox were found guilty on Friday for the murder of Gareth Hutch, 36, investigators revealed that Keogh was being paid by the Kinahan gang to execute various hits during their ongoing feud with the Hutch gang.

Keogh, his sister and Fox received life sentences for planning and executing the murder of the nephew of Hutch gang leader Gerry ‘The Monk’ Hutch.

Gareth was gunned down by Keogh and a second assailant known as “AB” while getting in his car in the parking lot adjacent to the Avondale Housing Flats in the Northside of downtown Dublin.

In an impact statement delivered to the court, Gareth’s mother said: “My world has changed forever since Gareth’s death. It still hurts emotionally and physically every day.”

“We’ve lost a son, an uncle, a friend and a daddy,” she said. “His son will miss his daddy at a crucial time in his life and he has been denied to watch his son grow up, take him to his first football game.”

In reply, Keogh — wearing a dark gray tight t-shirt and blue jeans — shouted out in court, “What about everyone else’s families? What about all the other families? B******s. Sorry judge.”

Keogh had pleaded not guilty and shouted “rats” when the hearing was interrupted for lunch.

When presiding justice Tony Hunt delivered Keogh’s verdict, the guilty defendant was hunched over, only looked up sporadically and remained deadpan.

Hunt agreed with the prosecution that the murder was “deliberate and callous.”

According to the verdict, it was beyond reasonable doubt that Regina helped her brother to secure the apartment in the same building where Gareth Hutch lived to monitor their victim on the morning of the killing.

Fox received an additional six years for the unlawful possession of a Makarov 9mm handgun.

The feud between the gangs lead by Gerry ‘The Monk’ Hutch and Christy “the Dapper Don” Kinahan started in 2015 when Gary Hutch, a nephew of Gerry, was gunned down in Spain. The Kinahan gang suspected Gary to be an informant and ordered his assassination, according to the Independent.

During the feud, which has cost the lives of 18 people, Keogh was hired as a hitman, working closely together with contract killer Eamon Cumberton to finish off a list of four Hutch family members and associates, for which they received €100,000.

Cumberton has already been sentenced to life for killing republican politician Michael Barr in March 2016. Barr was allegedly linked to the IRA and murdered because the Kinahans suspected he was involved in the murder of their associate David Byrne.

When investigating the murder of David Byrne, Spanish police found out about Keogh’s hit list, which included Barr.

“Keogh and Cumberton were working on a list of targets and they were given €100,000 for these,” investigators said. “They have been making inquiries about four people. Cumberton and Keogh are very careful and surveillance-conscious.”

“Kinahan is offering huge money to have the Hutch Organised Crime Group wiped out and they’re offering €1 million for Gerard Hutch and €500,000 for the killing of James Gately,” they added.

Keogh received another €30,000 to travel to Northern Ireland and murder Kevin ‘Flatcap’ Murray, whom the Kinahan gang suspected to be behind the killing of David Byrne. Keorg did not complete that ordered hit, however, suspecting Murray was under police surveillance.

Unable to kill anyone else on the list besides Barr, they started eyeing Gareth Hutch.

An unnamed source told the Irish Sun that “Keogh was given a huge responsibility by the Kinahan cartel because of his experience in handling explosives, weapons and his violent reputation.”

Keogh was appointed leader to carry out the killings and hired young recruits to help him.

Christy Kinahan is a convicted drug dealer whose father was a dairy farm manager. He was first arrested for crimes related to heroin in the 1980s and refused early release from prison to complete a degree. The Kinahan cartel leader learned Spanish and Russian while inside and is suspected of setting up drug routes into Western Europe for Colombian, Mexican, North African and Russian-speaking crime groups.

As the Kinahan cartel leader now allegedly spends his days in Dubai, his son Daniel is suspected of running the gang’s day-to-day operations. Daniel is also a boxing promoter and was the alleged target of a murder hit at Dublin’s Regency hotel during a boxing weigh-in.

Gerry “The Monk” Hutch became a feared name in Dublin’s underworld in the 1990s. He grew up poor in the city’s north side, and during an infamous interview with state television, Hutch claimed he turned to crime for food and clothes.

By the age of 23, “The Monk” was suspected of having planned a €1.6 million robbery, and eight years later he was the main suspect in a €3.5 million from a cash storage facility. His brother and nephews have had numerous run-ins with police, some of them related to the origins of Gerry’s money.

Unlike the flamboyant Christy Kinahan, Gerry has a disciplined and ascetic lifestyle, leading to his nickname “The Monk.”

“This criminal group is involved in the importation and distribution of controlled drugs, murder, firearms and serious assaults,” they said. “The gang are believed to have significant connections throughout Europe and especially around the city of Birmingham in England.”