A group of Cambodian civil society organizations has petitioned the European Union to reconsider signing an agreement on timber trade with Vietnam, saying that the country has not done enough to stop the flow of illegally-cut Cambodian wood across its borders. 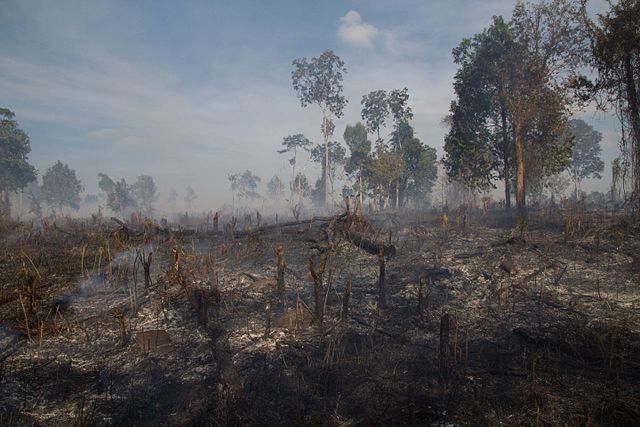 Cleared forest in Cambodia (CC 4.0)Cambodia has long been a source of high-grade timber sold to make luxury furniture in China and Vietnam. It has also long banned the logging of these timber species.

However, despite crackdown after crackdown, the illegal trade continues across the porous Cambodia-Vietnam border, allegedly pumping millions into the pockets of Cambodia’s ruling family and giving Cambodia one of the highest rates of deforestation in the world.

The petition says the trade is “facilitated by corrupt officials on both sides of the border,” and amounts to timber laundering by Vietnamese officials.

“Even more alarming is the policy by Vietnam to provide necessary paperwork and the veneer of legality to basically all Cambodian timber that crosses the border, in disregard of legality criteria, thereby legitimizing and ‘laundering’ massive amounts of illegal timber,” the petition says.

The EU and Vietnam have for the past year been in the process of designing and signing a Voluntary Partnership Agreement under a framework called Forest Law Enforcement, Governance and Trade (FLEGT).

That agreement would see them cooperate on strengthening Vietnam’s sustainable forest management, and increase the trade in legal timber products by implementing a system to ensure timber legality.

The agreement would commit Vietnam to cleansing illegal timber from its supply chain. Petitioners expressed doubt that Vietnam is ready to do this.

“There is apparently no willingness by the Vietnamese authorities to assist Cambodia in enforcing forestry laws and export regulations,” said the petition.

Partly in response to these allegations, Hun Sen has initiated a series of crackdowns on the trade which have not stopped the flow, and promised several times to shoot illegal loggers from helicopters.

In the meantime, his regime has overseen a dramatic suppression of free media, and the murder and imprisonment of environmental activists, members of the opposition, and critics.