Myanmar: Three Reporters Arrested in Another Crackdown on Media 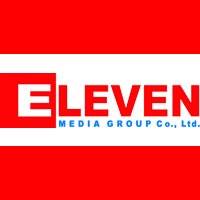 The logo of Eleven Media Group, whose journalists were arrested (Photo: Facebook)Executive editors Kyaw Zaw Lin and Nayi Min, along with chief reporter Phyo Wai Win, arrived at Tamwe township court in Yangon in handcuffs on Wednesday morning to hear the charges, according to Reuters.

The men are being held for violating Section 505(b) of the Penal Code, which penalizes anyone who causes public unrest or causes any person to commit an offence against the state or against “public tranquillity.”

Kyaw Zaw Lin told Reuters police raided the paper’s offices at about 7 p.m. on Tuesday, but none of the three journalists was there. The three were arrested later that day.

“The office informed me that they came because of an article in the journal,” he told Reuters before entering the police station in Tamwe.

They were later taken to Insein Prison in northern Yangon, where they will remain until their hearing on Oct. 17.

The arrests came after the Yangon regional government filed a police complaint concerning an article written by Phyo Wai Win and published Monday in the Weekly Eleven news journal that criticized the regional government’s use of taxpayer funds, specifically for a project intending to provide school bus services.

The Yangon government neglected to inform the Myanmar Press Council, which oversees conflicts related to the media, before ordering the arrests.

“They have to inform the council, and they should take action under the Media Act if there is a problem with an article,” Kyaw Swar Min, the Council’s secretary, said.

“The council was formed with the permission of the Myanmar government,” he added.

Press freedom is beleaguered in Myanmar, a country led by a woman who Time called one of the “Children of Gandhi” in 1999. Criticism of Aung San Suu Kyi - in particular her treatment of the press - has risen sharply since she became State Counsellor in 2016.

A total of 38 journalists have faced charges during her administration, according to the freedom of expression group Athan.

Back in 2016, the then-editors of the same media outlet, Eleven Media Group, were arrested on charges relating to a complaint made by Chief Minister Phyo Min Thein over a Facebook post alleging corruption in his dealings with local businessmen.

“The whole media industry is under threat,” Hlaing Thit Zin Wai, founder of the Protection Committee for Myanmar Journalists, said this week.

“I even have a bag packed at home as we cannot predict when it will be our turn,” he added.

The International Press Institute echoed the climate of fear. “The arrest of Eleven Media group journalists is an affront to press freedom in Myanmar and demonstrates that the government in Myanmar is close to becoming an authoritarian regime that does not believe in democracy,” head of advocacy Ravi R. Prasad said.

In an interview last week with the Japanese news outlet NHK, Aung San Suu Kyi said she believes there “is a lot of press freedom in Myanmar.”

“I didn’t write anything wrong,” said Phyo Wai Win, the author of the condemned article, said as he entered the police station earlier this week. “I only wrote the truth.”