Gupta Friend Will Testify if S. Africa Pays US$12,000 for His Flight

An associate with close ties to the Indian-South African Gupta family is set to testify at the family’s naturalization hearing, but first, he has a few demands - a return business class airline ticket for himself from New Delhi, which the South African Parliament estimates will cost a whopping US$12,100, the Sunday Times reported. 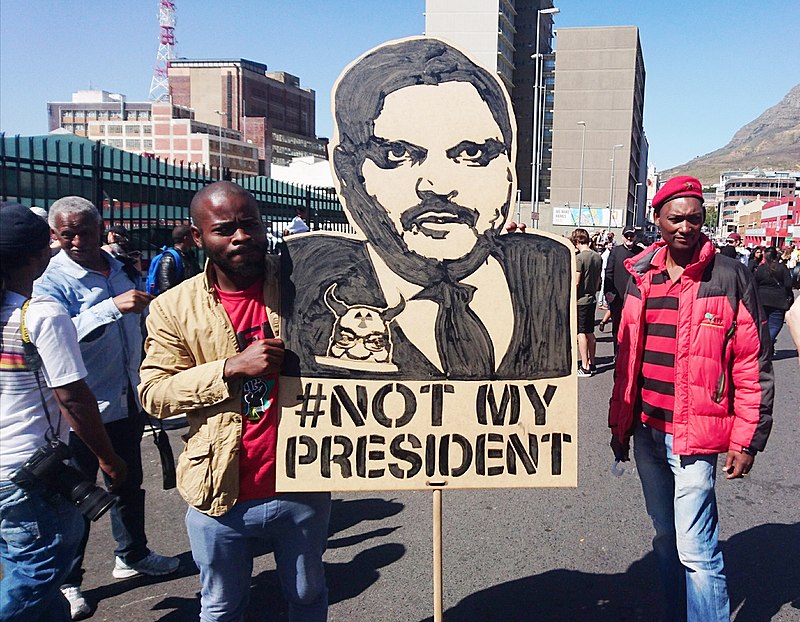 A protest placard depicting Atul Gupta at a Zuma Must Fall protest in Cape Town. The slogan "#Not My President" on the placard explicitly links Atul Gupta with President Zuma. (Photo: Wikipedia, CC BY-SA 4.0)Ashu Chawla has also demanded a Hindi interpreter, even though he has been a South African citizen for 17 years.

“He wrote a detailed letter to the minister in English‚ but today we hear he can't speak and wants a Hindi interpreter,” an exasperated committee chairperson said.

The Department of Home Affairs, the body leading the naturalization hearings, added to the controversy when they announced Wednesday they suspect Chawla’s ID photo has been digitally manipulated to make it appear he is wearing sunglasses, which are not permitted in ID photos.

Chawla was a chief executive of Sahara Computers, one of many companies owned by the Gupta family. The Indian-born multi-millionaires who arrived in South Africa in 1993 formed close personal and business ties to the recently-ousted president, Jacob Zuma. The persons of interest in the family include three brothers, Tony, Ajay, and Atul, and three of Atul’s nephews, Varun and US-based Ashish and Amol.

The Guptas have long been subjects of intense scrutiny and investigations, raising numerous allegations of corruption, undue influence and state capture as the family widened its sphere of influence over the past decades from computers into the mining, real estate, aviation, tourism and media sectors.

An OCCRP investigation published in August traced the remarkable story of how the Guptas used their millions to purchase diamonds in a scheme which defrauded a state program aiming to help poor black dairy farmers. Chawla is currently on bail in that matter.

Mere hours after Zuma announced his resignation on February 14, the three Gupta brothers vanished. Ajay is considered a fugitive.

The brothers are thought to have fled to Dubai, continuing to conduct their business from the luxury five-star Oberoi Hotel. But in Zuma’s absence, the empire they built over the past decades has begun to crumble.

Now, the focus of attention is on the Guptas’ naturalization hearing, which is set to determine whether hundreds of permits and visas facilitated on behalf of the family, both for themselves and their employees, are bogus. Chawla allegedly organized many of the visas.

Ajay, the eldest brother, never renounced his Indian citizenship and therefore was never naturalized in South Africa. India does not allow dual citizenship, so his brothers Tony and Atul relinquished theirs in order to become South African citizens.

Amidst all the chaos of hearings and investigations, the offices of Sahara Computers - one of the oldest legacies of the Gupta empire - quietly closed down. The Guptas seemed to have left in a hurry, abandoning a collection of model airplanes, a massive TV and a jersey signed by South African cricket stars.