US, UK, the Netherlands Accuse Russia of Cyber Attacks

The U.S. Department of Justice indicted on Thursday seven Russian intelligence officers over alleged cyber attacks against the U.S. and its allies, saying they targeted the World Anti-Doping Agency, the U.S. Anti-Doping Agency and a nuclear power company in Pennsylvania. 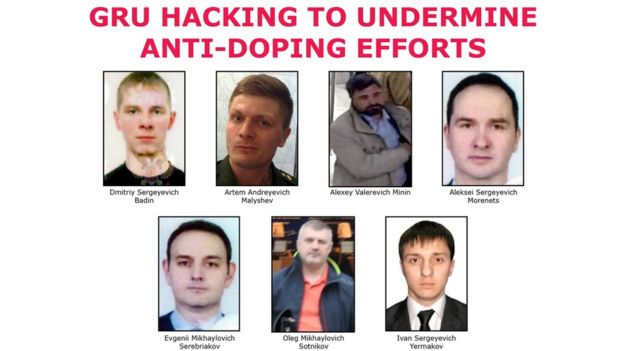 Suspects indicted by the U.S. Department of Justice (Photo: FBI)The indictment comes on the heels of accusations made by several nations, claiming they were targets of Russian intelligence cyber attacks.

The United States, the United Kingdom, and the Netherlands have accused Russian intelligence of attacking the Organization for the Prohibition of Chemical Weapons’ (OPCW) investigation into the chemical attack on a former Russian spy in the U.K. and anti-doping organizations.

Throughout the day, officials explained the various operations allegedly by Russia’s intelligence unit, the GRU. Though the U.S. and the U.K.-Dutch investigations were separate, several of those indicted in the U.S. were also accused by the U.K. and the Netherlands.

Three of seven suspects were already indicated earlier this year along with nine other GRU officers in an unrelated investigation by the U.S. Special Counsel, Robert Mueller. in connection to plotting to interfere in the 2016 U.S. presidential elections.

U.S. authorities say that the hacking and disinformation campaigns came in response to the July 2016 report from the World Anti-Doping Agency that accused Russia of state-sponsored doping. Along with hacking these groups, authorities also say that health information about athletes were stolen.

“Our indictment today charges some of the same Russian operatives caught in The Hague, along with their colleagues in Moscow, as part of a conspiracy to hack a variety of individuals and organizations, in the United States, Canada, and Europe, to obtain information or access that was then exploited for the benefit of the Russian government,” said Assistant Attorney General for National Security John Demers.

“The GRU did so in response to the efforts of anti-doping officials’ exposure of Russia’s systematic and state-backed athlete doping program. Embarrassed by that truth, Russia fought back by retaliating against the truth tellers and against the truth itself,” his statement said.

“Nations like Russia, and others that engage in malicious and norm-shattering cyber and influence activities, should understand the continuing and steadfast resolve of the United States and its allies to prevent, disrupt, and deter such unacceptable conduct,” Demers said.

These charges were announced soon after authorities in the United Kingdom and the Netherlands reported a secret joint operation that prevented a Russian intelligence mission that was directed at the Organization for the Prohibition of Chemical Weapons (OPCW) in the Hague. The organization is a chemical weapons watchdog with a mandate from the United Nations.

The Dutch government accused four Russian nationals of planning to hack the OPCW. These four are also some of the seven indicted by the U.S.

Dutch authorities expelled them from the country after they were found near the OPCW office. They held diplomatic passports so were immune from prosecution, the BBC reported.

The OPCW was investigating the poisoning of Sergei Skripal, a former Russian military intelligence agent, and his daughter Yulia back in March. The U.K. has charged two alleged GRU operatives with attempted murder. Novichok, a nerve toxin, is believed to have been used in the attack.

Two others in the U.K. were also poisoned after they came into contact with the container used to carry the toxin, the Guardian reported. One of the two, Dawn Sturgess, died from the exposure while it hospitalized her boyfriend, Charlie Rowley.

“We have, with the operations exposed today, further shone a light on the unacceptable cyber activities of the Russian military intelligence service, the GRU,” U.K. Prime Minister Theresa May and Dutch Prime Minister Mark Rutte said in a joint statement.

Russia denies connections to the poisoning and the hacking.