Police arrested an opposition senator who spent three weeks holed up in his office after Philippine President Rodrigo Duterte revoked his amnesty over his involvement in a failed coup 15 years ago. 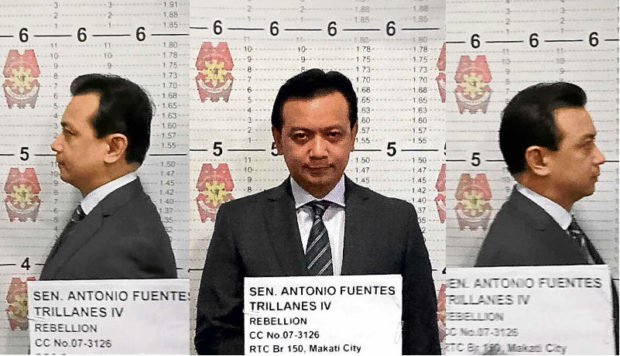 Mugshots of Trillanes at the Makati City police station (NCRPO)Senator Antonio Trillanes, a vocal Duterte critic, surrendered after police obtained an arrest warrant from the Makati Regional Trial Court where he posted bail of 200,000 pesos (US$ 3,680).

Police released a mugshot showing a defiant Trillantes holding a sign with his name and the word ‘Rebellion’ underneath it.

“I hope he’s watching the proceedings because someday he will have to go through the same thing,” Trillanes said, taking aim at Duterte.

Trillanes filed a plunder complaint against the President in 2016, alleging that Duterte had engineered a scheme to take millions from public coffers when he was the mayor of Davao City.

The scheme allegedly involved thousands of ‘ghost employees’ on the city payroll. Earlier this year, Duterte fired an anti corruption official who was investigating him over these claims.

Trillanes called that move “harassment” and a “cover-up tactic.”

Then three weeks ago, Duterte suddenly revoked Trillanes’ amnesty granted to him by former Philippine President Benigno Aquino eight years ago for his part in a 2003 coup.

The executive order, printed in The Manila Times, a Duterte-friendly newspaper, said that Mr. Trillanes had failed to apply for amnesty and “admit his guilt.”

“The arrest ... is part of the persecution of critics of the Duterte administration, the latest in the relentless campaign to silence those who dared to challenge the president’s murderous ‘drug war’,” said Carlos Conde of Human Rights Watch Philippines.