Abdulla Yameen, the autocratic leader of the Maldives whose rule saw the corrupt handouts of 50 of the country’s islands, was defeated on Sunday in a landslide election that elevated opposition lawmaker Ibrahim Mohamed Solih to power after five years of deepening autocracy. 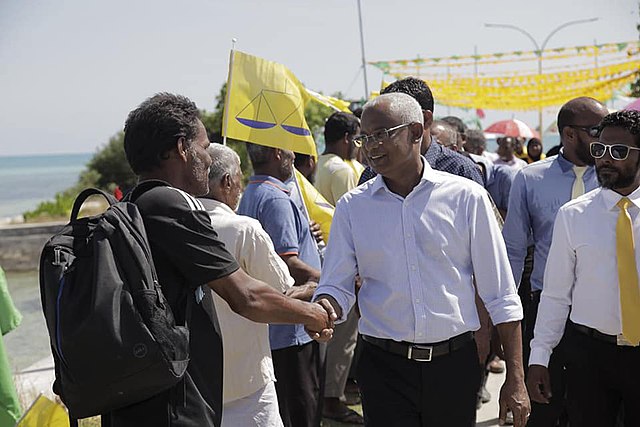 Ibrahim Solih campaigns in the Maldives (CC 4.0)The elections were “the most perfect and most organized election held in Maldives history despite allegations that we would rig the vote,” said Ahmed Nihan, a member of parliament for the ruling party, shortly after Gayoom conceded the vote on Sunday afternoon.

“All those allegations against President Yameen, calling him a corrupt thief, are nothing but baseless lies,” added party spokesman Ali Arif.

Solih represents four opposition parties, the leaders of whom are in detention or exile. Police raided his office over “bribery” suspicions Saturday night, but came back empty-handed.

“This is the first successful step on the road to justice,” Solih told reporters. “We achieved this because of the hard work of Maldivians.”

An OCCRP investigation that dropped a week before Maldivians went to the polls detailed how Ahmed Adeeb, the Maldives’s former tourism minister, handed out at least 50 of the country’s pristine tropical islands to tourism developers--at least 24 of them under Yameen’s authority.

The no-bid deals are estimated to have cost the country at least US$79 million--money that was embezzled by officials via private bank accounts.

Gleefully hashing out island leases via text message, Adeeb and his fellow tourism officials dubbed themselves “the untouchables.”

Adeeb now sits in prison. As for Yameen, he stood by his record in his concession speech.

“In every instance, I worked for the rights of the people… I worked to uphold the rule of law, and to prevent the effects of illegal acts from being felt by the people,” he said.