A new investigation published Monday by Atlatszo, an OCCRP partner organization in Hungary, has found links between members of the Hungarian elite, including Prime Minister Viktor Orban, and a luxury yacht and private jet, both registered abroad. 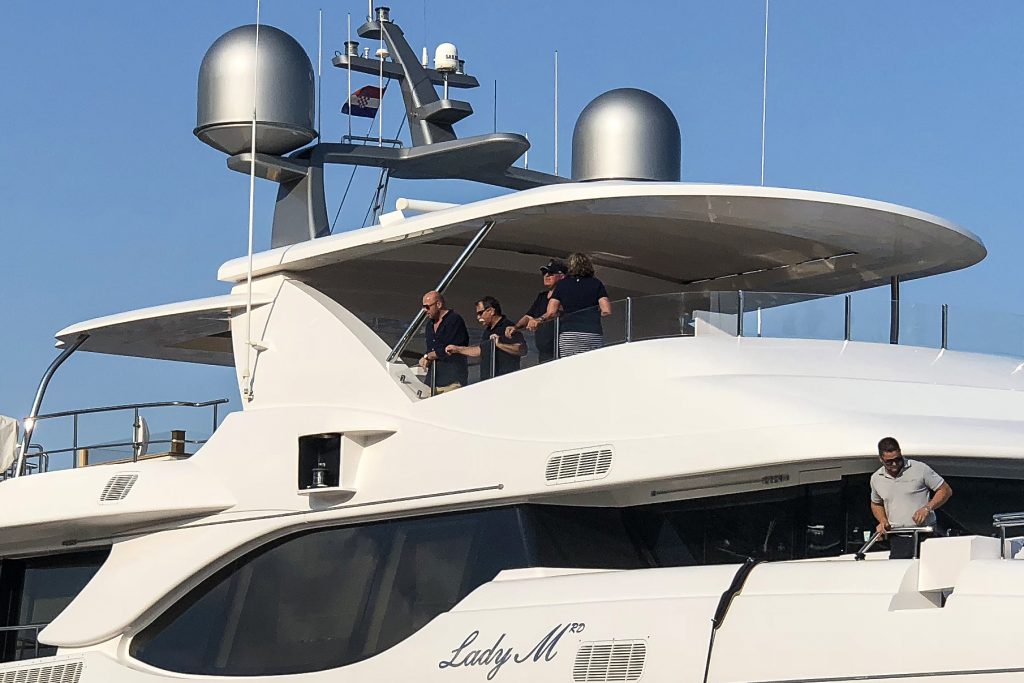 Robert Homolya, Erno Kovacs and Laszlo Szijj on board of Lady Mrd in Opatija, August 16, 2018. (Photo: Daniel Nemeth, Atlatszo)The online media outlet has been tracking the movements of the yacht and jet for months. In July, merce.hu published a photograph of Lorinc Meszaros, Orban’s friend and one of Hungary’s most powerful oligarchs who reportedly owns a staggering 203 companies as of January 2018, aboard a luxury yacht called Lady Mrd docked in Porto di Ischia, Italy.

Atlatszo had already been tracking the private jet for awhile, but after the photograph was published they began to piece together the connections between the jet and the yacht.

Lady Mrd was built in 2015 by the Italian shipbuilding company Benetti. The Benetti Crystal 140, as the model is called, is 42 meters long, nine meters wide, and can accommodate a crew of seven and ten guests.

The luxury yacht was up for sale last year for US$ 24.6 million (€20.9 million). Originally called Lady M, the yacht was registered in the Cayman Islands. After it was sold, it was renamed Lady Mrd and registered in Malta in January 2018.

Tracking Lady Mrd by drone, Atlatszo has recorded its many trips crisscrossing the Mediterranean with stops in Italy and Croatia. In the past few months, the vessel has crossed paths with the private jet reporters had already been keeping tabs on.

The jet, a brand new Bombardier Global 6000 valued at $62.38 million (€53 million), is registered in Austria under the code OE-LEM. Its owner is unknown, but it is operated by an Austrian business jet company.

Even though the jet is by all accounts Austrian, reporters found that it is almost always parked at the Budapest airport, hardly ever flying to Vienna, its supposed base.

Over the past few months, OE-LEM has taken off from the Budapest airport several times and landed in cities where Lady Mrd was anchored at the time. Some of these cities include Bari, Split, Podgorica, Rijeka and Venice.

Atlatszo’s drone has photographed numerous members of Hungary’s powerful elite sunning themselves on the deck of the yacht this summer, including Robert Homolya, president of the Hungarian state railway company (MAV), businessman Laszlo Szijj and government commissioner Erno Kovacs.

Some of the guests tried to hide their faces when they saw the drone.

According to website 24.hu the European Anti-Fraud Office (OLAF) has been investigating Homolya since 2010, when he was the deputy chief of the agency responsible for distributing EU funds.

Atlatszo’s drone and additional CCTV footage noted a “flurry of activity” onboard the yacht this summer. The private jet, meanwhile, appeared to be shuttling guests from the docked yacht to Budapest and various other European cities.