World trade is up, and the risk of cross-border corruption has increased with it. But a new report by OCCRP partner Transparency International (TI) says that international enforcement of anti-bribery laws has barely moved in the past three years. 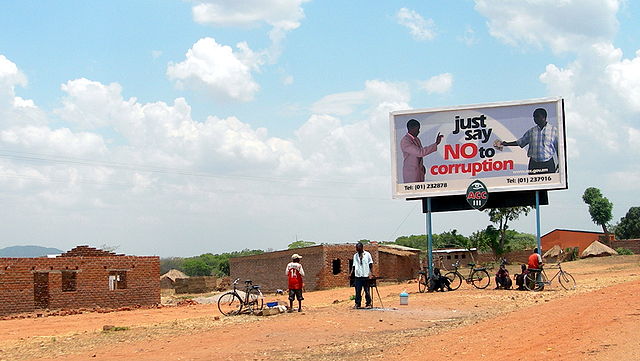 A billboard says "Say No to Bribes" in Chipata, Zambia (CC 2.0)“Disappointingly, there has been little change in the overall enforcement level...since the last report in 2015,” says the report, released Wednesday. The “fundamental goal of creating a corruption-free level playing field for global trade is still far from being achieved, due to insufficient enforcement.”

The 160-page report focuses on 44 countries which signed the Organization for Economic Co-operation and Development (OECD)’s Anti-Bribery Convention. The convention mandates that these countries--which together account for 65 percent of global trade--make it a crime for their citizens and corporations to bribe foreign officials.

But while the convention is more than 20 years old, the number of countries that are classified as “actively” or “moderately” enforcing it has remained about the same for the pasta three years.

Since 2015, says TI, anti-bribery enforcement has improved in just eight countries, while things have gotten worse in four.

The report is based on public information, as well as expert knowledge from countries where TI operates.

A country’s rating is based on  the number of investigations it started, as well as the number of anti-bribery cases it opened during the years studied. Among the countries that have improved are Italy and Norway, which both moved from being “moderate” enforcers of the convention to “active” enforcers.

Altogether, just over a quarter of the world’s exports (27 percent) come from countries that actively enforce the anti-bribery convention.

Without this information, said the report, it is harder to identify and deter corrupt actors.