The former Vice President of Argentina, Amado Boudou, was convicted of corruption on Tuesday, and sentenced to six years in prison, Agence France-Presse reported. 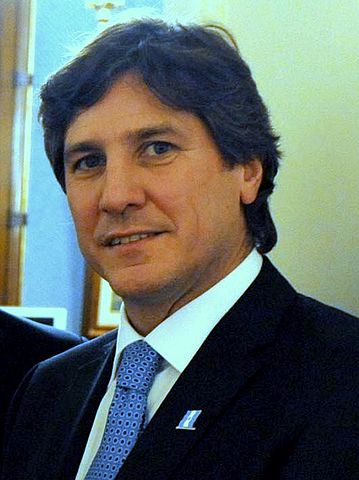 Former VP Amado Boudou was sentenced to six years in prison on corruption charges. (Source: Presidencia de la Nación Argentina. CC BY 2.0)The conviction comes days after former president Cristina Kirchner, who succeeded her husband, former president Nestor Kirchner, was summoned for questioning in another corruption case where tens of millions of dollars in bribes allegedly ended up in presidential residences and offices from various private companies at a time she was the first lady.

Boudou served as Kirchner’s economy minister from 2009 to 2015. The charges relate to Boudou’s attempt to buy Ciccone Calcografica, a company that printed currency through a front business while in office.

Specifically, the court found Boudou guilty of trying to lift a bankruptcy declaration against Ciccone in return for a 70 percent share in the business.

In addition to his six year sentence, Boudou is banned from holding public office for life.

Boudou denied the accusations saying the "alleged bribe has no basis or link to the evidence because it didn't exist."

Five businessmen were also convicted alongside Boudou, including the former owner of the company Nicolas Ciccone, who was given a four-and-a-half year sentence, and Argentina's former representative to the World Bank, Guido Forcieri, who was given a two-and-a-half-year suspended sentence.

The head of the country’s anti-corruption office, Laura Alonso, said this case showed the country had confronted official corruption in an "open and public trial" and that there is "justice in Argentina."