Baghdad’s female mayor called for women to lead the fight against corruption in the war-torn Iraqi capital, The National reported Monday. 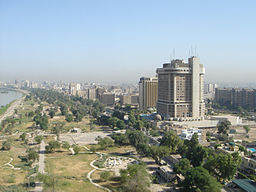 Baghdad Red zone By Robert SmithZikra Alwash, who was a civil servant prior to becoming the city’s first female mayor, spoke about her 10-year plan to rebuild Baghdad which includes total gender equality.

She spoke at length about the “women united against corruption campaign,” which was an initiative created by Iraqi women to address corruption in politics.

Iraq’s consistent problems with widespread corruption prior to the fall of Saddam Hussein in 2003 and afterwards have placed is 169th out of 180 on Transparency International’s Corruption Perception Index.

The thirteen years of international sanctions during the Hussein regime, followed by the almost total destruction of Baghdad by U.S. forces, and the mass rural migrations to the capital following ISIS capture of a third of the country, have put pressure on the delicate government structure.

"Revenues made do not cover our staff salaries and the municipality's allocations. We have taken into account the economic crisis the country is going through as well as its brutal war against ISIS," she said.

The mayor said that city officials had found alternative solutions to ensure basic services were distributed around the capital.

Part of the future of Baghdad Alwash says, is increasing female representation in government.

"We have proven that women in legislative bodies are excellent in their positions but women need to be empowered economically through workshops and programmes carried out by the government and international bodies," she said.