A Florida city commissioner turned himself in to the police on Wednesday amid claims that he accepted over $US 20,000 in bribes from a strip club owner in exchange for an extended liquor license, local media reported. 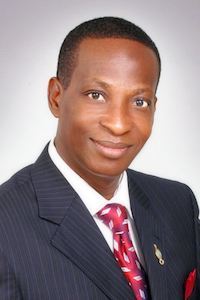 Frantz Pierre (City of North Miami Beach)The North Miami Beach Commissioner is also in legal trouble for an alleged scheme to steal thousands of public dollars intended for an after-school program that did not actually exist.

Frantz Pierre is charged with single counts of bribery, unlawful compensation, an organized scheme to defraud, and grand theft, along with seven additional counts of money laundering. Late Wednesday, Florida Gov. Rick Scott suspended him from office with an executive order that also blocks him from receiving a city paycheck or benefits.

“He sold his vote,” said Miami-Dade State Attorney Katherine Fernandez Rundle, according to the Miami Herald. “If someone thinks that they can use their public position as a cash cow to take public money, think again.”

In one instance, investigators say Pierre texted Dean Tyler, the owner of Dean’s Gold strip club, after getting into a car accident and was in need of a quick loan.

"Mail $7-8K to Frantz Pierre … BE FOREVER BLESSED,” a text message from Pierre to Tyler said, according to a Miami-based ABC affiliate.

After receiving confirmation that the money was in the mail, Pierre reportedly wrote back “Thank you so much. That will not be forgotten.”

In exchange for the check, as well as three others totaling $US 5,500, Pierre cast votes in favor of extending the club’s liquor license an extra two hours to 6 am every morning. Pierre had previously voted against the extension in 2013, local media said, but voted in favor in 2014, 2015, and 2016.

In addition to the $12,500 given to Pierre directly, investigators also accuse Pierre of asking Tyler to pay $9,865 to the non-profit Community Hope for Children and Families in Need, of which $5,250 was purportedly funneled to him.

In the same time period, the owner of the charity, Jaquelin Alexis, solicited $5,000 from the city for a supposed after-school tutoring program. The city issued $2,000 from Pierre's discretionary fund, and authorities say Alexis paid Pierre $2,905 with some of the city cash.

According to the Miami Herald, investigators say the after-school program did not actually exist.

Pierre, who was elected to office in 2007, has been chased by legal and ethical scandals for the past year. He was ousted from office in January for failing to attend commission hearings for six months while dealing with a medical condition, but later reinstated.

Then in May, an ethics commission found him guilty of attempting to intimidate a compliance officer by threatening her job if she did not ignore code violations at his North Miami beach home. He was issued the largest possible fine of $1,000 and required to pay back $500 in legal fees.