Italian anti-mafia officers arrested on Tuesday over 30 suspected mobsters thanks to their wives who had decided their children deserve the chance to lead a crime-free life. 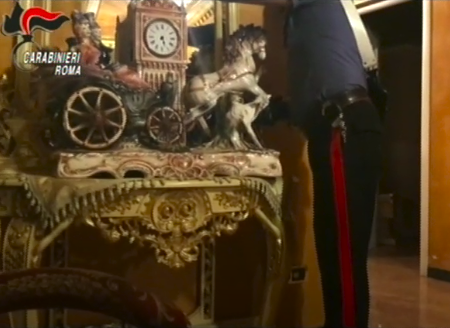 (Source: Carabinieri Roma)According to the Daily Beast, a group of women connected to the mob provided authorities with pivotal insight and evidence over the past year that helped illuminate the complex criminal network of Rome's powerful Casamonica clan.

Special ops police issued 37 arrest warrants for people on charges of mafia collusion, drug trafficking, extortion, and related crimes. Thirty one were arrested, including one of the alleged heads of the organization, Giuseppe Casamonica, as well as Italian champion boxer Domenico Spada, according to the Local. Six suspects remain at large.

In addition to seizing a number of properties, police confiscated €50,000 (US$58,000) in cash, two dozen cars, 15 Rolex watches, loan sharking accounting books, and specially made, ergonomically-correct sticks used to beat journalists who investigated the gang’s activities.

Debora Cerreoni, wife of senior mobster Massimiliano Casamonica, reportedly aided the investigation by deciphering the clan’s vernacular in bugged recordings obtained by police, according to The Times.

Forty days before she went to the police, Cerroni was allegedly taken hostage in one of the family’s plush homes in suburban Rome after family members began to doubt her loyalty.

“We’ll dissolve you in acid,” Cerreoni said suspicious family members told her, according to the Times.

She was held captive by Liliana Casamonica, a feared member of the clan who slept next to the gang’s cocaine stash and took charge while her brother, a senior boss, was in jail.

Police say they first identified the group of women as potential cooperators last summer after the funeral of the crime family patriarch Vittorio Casamonica, according to the Daily Beast.

Vittorio’s service was tantamount to a Roman state funeral; Six black stallions pulled a gilded funeral carriage through the streets, and a low-flying helicopter dropped rose petals on the grieving crowd - who were serenaded by an orchestra playing the theme song from the Godfather.

When discussing the operation, chief investigating magistrate Gaspare Sturzo referred to the crime group as the “Casamonica archipelago,” which he described as a “complex system made up of several families connected to each other but independent of each other,” The Daily Beast reported.

Their range of criminal specialization spans usury, extortion, weapons and drug smuggling, falsifying documents, racketeering, and illicitly granting loans - all with "a mafia character," a specific crime under Article 416 of the Italian Penal Code, according to the Local.

The Casamonica clan, which descended from an organized crime family of Roma ethnicity that migrated from southern Italy, controls large areas of the eastern and coastal Rome. Its criminal empire is reportedly worth more than €90 million (US$105 million), and is composed of over 1,000 members across 43 families.

They became famous for extortion and charging obscene interest on loans, in some cases as much as 1,000 percent.

In 2012, police arrested 39 members of the clan for drug trafficking, but failed to topple its power structure.