Opponents of an Ukrainian anti-corruption protest threw cream pies and a chemical green liquid into the face of a top activist who said the substance burned his face, Reuters reported on Tuesday. 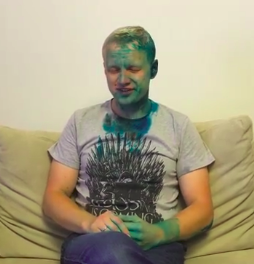 Vitaliy Shabunin after the attack (antac.ua facebook)A video published by Radio Free Europe shows Vitaliy Shabunin with green stains on his face and left hand saying, “I’m sorry my eyes are closed. I have a chemical burn.” The substance appears to be "zelyonka," a liquid sold in Ukraine as an antiseptic and often thrown into the faces of political opponents and activists.

Shabunin founded the Anti-Corruption Action Center and has gained a reputation for being an outspoken critic of Ukrainian President Petro Poroshenko. He and the members of his nonprofit organization have accused Poroshenko of bribing lawmakers and profiting from corrupt business deals.

In Tuesday’s protests in front of Kyiv’s prosecution office, Shabunin and activists called for the resignation of the special anti-corruption prosecutor after he decided to close an investigation into the son of Interior Minister Arsen Avakov.

While Ukraine has attempted to make strides toward increased freedom of speech since the Ukrainian revolution in 2014 and the ousting of former pro-Moscow President Viktor Yanukovych, there is a rising tension between anti-corruption activists and anti-corruption government efforts.

Activists believe that the new government is sliding back into old habits rather than improving the civil liberties of the nation.

NGOs and Ukraine’s Western allies are interpreting the latest incident with Shabunin as yet another example of how anti-corruption promises from Ukrainian authorities are not resonating in society.