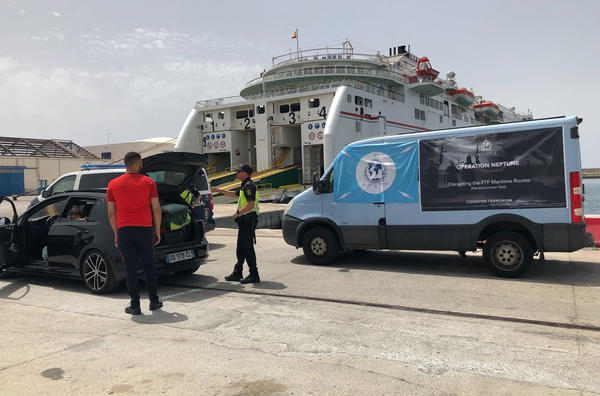 Interpol checking ports for terrorists (source: Interpol)In just the first week of “Operation Neptune,” four suspected foreign terrorist fighters and the location of one missing person were detected during 350,000 searches. The officers are checking travellers ID cards and passports against Interpol’s criminal databases which include stolen documents, often used by terrorists trying to move between countries.

The operation focuses on potential members of terrorist groups who are using maritime routes between North Africa and Southern Europe.

Interpol has been working to share their global databases and secure communications network and create procedures to track stolen and forged travel documents for years.

In September 2014, the United Nations Security Council recognized Interpol’s efforts against the foreign terrorist threat and adopted Resolution 2178, which urged all countries to “cooperate urgently on preventing the international flow of terrorist fighters to and from conflict zones.”

This resolution helped facilitate cooperation and Interpol has been able to make numerous successful arrests since.

Interpol hopes that Operation Neptune will expand this success to sea routes.

“While much of the world’s focus on border security has been on air and land borders, potential security threats from the sea receive less attention,” said Interpol’s Counter Terrorism Director Patrick Stevens.

The operation is dependent of cooperation from Algeria, France, Italy, Morocco, Spain, and Tunisia, as well as Interpol and other border organizations such as Frontex.