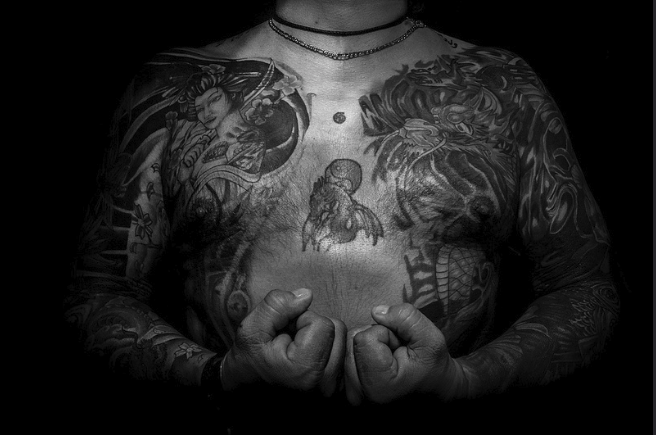 Traditional Yakuza tattoo (Eneas De Troya, CC BY 2.0)The total number of gang members in Japan dropped below 20,000 in 2016 - the lowest number reported since police started tracking the statistic in 1958 - and the Yakuza have been facing significant financial drain.

"Yakuza who have been hurting financially have been tying up with han-gure (members of non-designated crime groups, such as hot-rod gangs)," a retired gang leader from the Tokai region told Japan Today.

The Yakuza in rural areas, however, don’t have these other criminal groups to fall back on for funding.

In one instance, a 37-year-old gangster, nicknamed Uemura, began pilfering from farms. He had previously overseen operations of food carts at local shrine festivals and worked in construction, but after authorities began putting pressure on shrines and construction companies to cut any ties with the Yakuza, Uemura had to seek income from alternative means.

"Anyway, he got into stealing watermelons,” the former Tokai gangster told Japan Today. “During the daytime, he would send out younger gang members to case out promising patches, and then they'd return at night to see what sort of security, if any, was in place. Then they'd hit the ones that didn't have tight security.

"But even if they stole 100 melons, the most they could get for them was only about 300,000 yen (about $2,700). The damn things were heavy, and the ones that got damaged were unsellable. On top of that, while in the fields they'd get stung unmercifully by swarms of mosquitoes. My former mate later told me, 'Okay, next time we'll be targeting melons and tomatoes,'" recounted the former gangster.

However, despite the financial drain some organized criminal groups are facing, others still manage to engage in traditional criminal pursuits.

Earlier this week, police in Tokyo arrested four people, including two organized criminals belonging to the Inagawa-kai, in connection to a robbery last year that left the manager of a used car dealership with serious wounds, according to the Tokyo Reporter.

According to reports, the men, wearing ski masks, entered the dealership, sprayed the 65-year-old manager in the face with tear gas, slashed him in the left side with a japanese sword, and fled with some US$4,500 and two mobile phones.

Police have not revealed whether any of the suspects admit to the allegations.

Last week, a Japanese man said to be a member of the largest Yakuza network, Yamaguchi-gumi, was arrested on fraud charges as he attempted to board a flight in Bangkok, Coconuts reported.

Thai police were acting on an Interpol notice when they arrested Tokyo-native Tatsuka Tanaka, who is alleged to have lead a fraud ring that conned 83 people out of $724,000.

Tanaka, along with five other Yamaguchi-gumi members, allegedly scammed the unwitting persons into paying them the money by claiming to be Yahoo representatives collecting unpaid fees for internet services.

Japanese police have already arrested the five other gang members, according to Coconuts, and Tanaka is now set to be deported.