Organized crime groups are running a criminal system out of prisons in Venezuela and the Maduro administration has only bolstered their power, InSight Crime reported Monday. 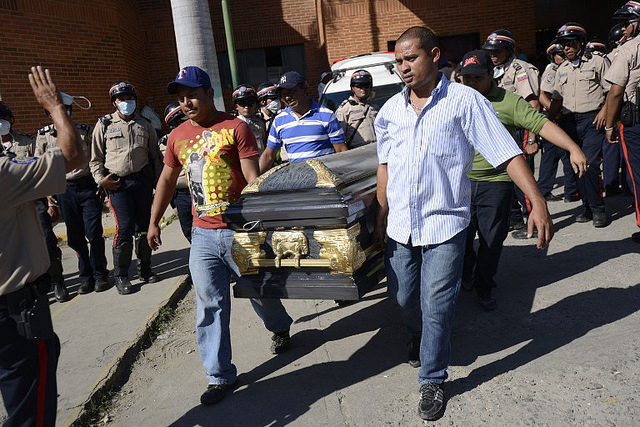 Relatives of inmates carry the coffin of a victim of a 2013 prison riot (CC BY 2.0)Venezuela has one of the most violent prison systems in the world, with 6,897 murders registered between 1999 and 2017, according to the Venezuelan Prison Observatory (Observatorio Venezolano de Prisiones — OVP).

The violence can be largely attributed to the growing power of these organized crime groups, called “pranatos,” which comes from the word pran, drawn from a Spanish acronym for “Preso Rematado Asesino Nato” or “natural-born double killer prisoner.”

These pranatos started taking control of prisons by gradually implementing a structure among the inmates, according to an investigative report by InSight Crime. They appointed lieutenants, collection services, social committees, and security wings — all of which were controlled by the top pran.

Prisoners paid taxes to the pran each week. Failure to do so resulted in beatings or death. Some prisoners could even pay more to the pran for a nicer cell or a flat-screen TV.

The pranatos obtained goods during visiting hours, when family members and friends would sneak weapons, drugs, and alcohol into bags or even suitcases of clean clothes and food.

In 2011, a month-long riot plagued the country’s Rodeo prison complex and ended with a three day standoff between the prisoners and the national guard. It took the government 27 days to re-establish control.

Following the Rodeo riot, the government appointed a minister to head the newly established Ministry of Popular Power for the Penitentiary Service, Iris Varela.

Varela’s approach to the problem was to befriend the pranes and make agreements with them, essentially recognizing their power over the prison.

“The government decided to essentially do nothing, and deliver the jails to the prisoners.” Roberto Briceno Leon, the director of the Observatorio Venezolano de Violencia (Venezuelan Violence Observatory), told InSight Crime. “The police and the National Guard now have to ask permission to enter.”

The pranes now run a government of their own with food stocked in the hallways of the prison and established relationships with outside vendors. Their power is seeping out of the walls of their confinement and the criminal activity once limited to within cell walls has now spread across the country, bringing more organized crime networks to a country that is already considered to be one of the deadliest in the world, according to a US Bureau of Diplomatic Security crime and safety report.

In addition to Varela’s contribution to the pranatos’ power, Venezuelan prisons are also extremely overcrowded, the buildings are deteriorating, and prisoners are lacking basic needs, InSight Crime said.

The Venezuela prison population has been steadily rising since 2000, reaching 57,096 in 2018 and spreading to police holding stations as well, which hold around 32,000 prisons at a 400 percent overcrowding rate.

As the prison population grows, so too does the power of the pranato criminal structure.

In 2013, the government announced a plan to implement prison reforms that take a more humanist approach. Prisoners were supposed to receive job training and participate in group activities, they would wear uniforms and be granted two visits per month. The government even promised 153 million bolivares (US$24.3 million) towards repairing the Uribana jail and 51 million bolivares (US$8.1 million) towards 10 other jails, according to InSight Crime.

However, conditions have not changed. Cells built for 36 prisoners are holding over 150, prisoners suffer from tuberculosis and HIV, they are undernourished, and they only get access to water for one hour per day, Time reported.

In 2016, four inmates and a prison guard died when a fight broke out between detainees and security officers, Humans Rights Watch said.

In March 2018, a riot caused a fire that killed 68 people, both prisoners and visitors.

Prisoners of the Tocoron prison, which is controlled by pran Hector Guerrero, ordered the June 19 murder of a teenage girl whose family refused to pay extortion money. Accomplices of the prisoners kidnapped the girl and burned her. She died a few days later, according to Version Final.