A judge sent the brother of a jailed mafia boss behind bars for six years for beating a reporter and his cameraman during a television interview, ANSA reported on Monday. 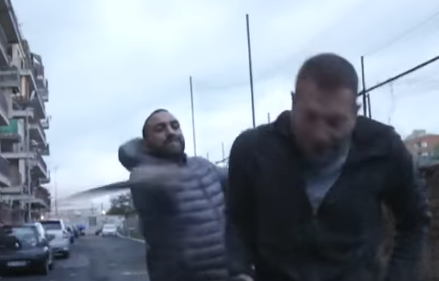 Roberto Spada chases Piervincenzi with a baton (From: Youtube)In November 2017, reporter Daniele Piervincenzi had asked Roberto Spada about his family’s political affiliation to a far-right party when Spada suddenly head-butted the reporter, pulled out a baton, chased him down the street and attacked his cameraman.

The RAI reporters were interviewing Spada in the seaside town of Ostia, which lies right next to Rome and is the turf of the Spada crime family. The camera was rolling and recorded the whole incident, which went viral and created a shock wave across Italy.

Spada and accomplice Ruben Nelson Alvarez del Puerto were arrested for assault and using mafia-style violence. Prosecutors said the way they attacked the reporters was emblematic of the tactics crime groups use to control their territory.

Public prosecutors had called for a sentence of eight years and nine months.